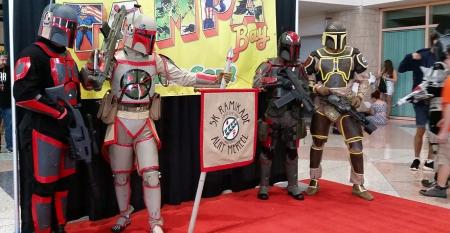 Not that Kind of Mask: Comic-Con Is On
May 21, 2020
Tampa Bay, Fla., will host the comic convention in mid-July, despite later fan shows canceling.

Financial Pain Stretches Across the Industry
May 18, 2020
Like hotels and restaurants, entities such as convention centers and bureaus have had to make wrenching...

European-style Piazza Debuts for Outdoor Events in San Diego
Jul 16, 2019
The Piazza della Famiglia has built-in amenities including lighting, audio, and Wi-Fi for off-site events near the convention center.

Caesars to Be Acquired by Eldorado in $17 Billion Deal
Jun 25, 2019
Eldorado Resorts management will lead the combined company, but Caesars Entertainment properties will continue to operate under the iconic brand.

When the CME/Marketing Firewall Falters: A Worst-Case Scenario
Jun 18, 2019
Johnson & Johnson is battling in court over its opioid-related CME programs that the government of Oklahoma says acted as...

Board Meetings, Not Boring Meetings
Jun 04, 2019
How should these sessions, and planners’ roles in them, evolve so that they continue to fulfill an association’s needs and goals? A veteran planner offers ideas.

Portland Makes a Play for Citywide Events
Jun 03, 2019
The largest convention center in the Pacific Northwest is getting an update, while a new headquarters hotel and other properties will boost the city’s guest-room count 42 percent by next year.

Sheraton's Brand Overhaul Aims to Drive More Interactions
May 21, 2019
Using the tagline "Where the World Comes Together" to highlight big space-design changes, the 82-year-old brand is adapting to satisfy the next generation of travelers.
Load More