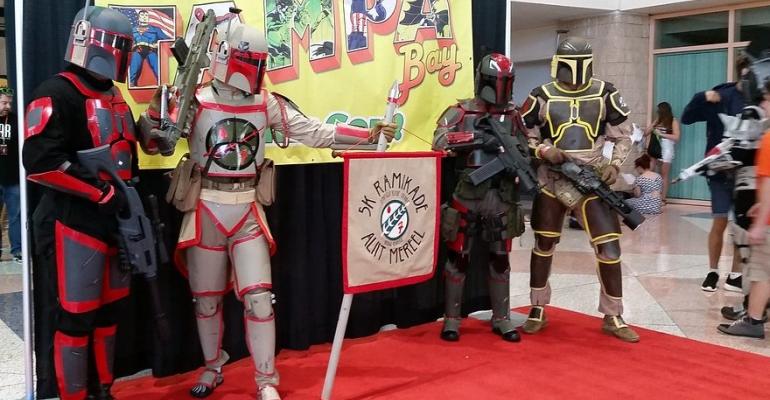 Not that Kind of Mask: Comic-Con Is On

Despite the global pandemic, an annual event that typically draws more than 50,000 attendees has announced it will be going ahead at the Tampa Bay Convention Center from July10-12.

Visit Tampa Bay CEO and President Santiago Corrada told news outlets, “Each group has its own set of circumstances as to why they may choose to cancel or move on. In this case, Comic-Con and Tampa Bay Convention Center came to an agreement as far safety and the numbers.”

Stephen Solomon, cofounder of Tampa Bay Comic-Con, (there are also large annual Comic-Cons in San Diego, Calif., and New York,) confirmed on Facebook that the event will go ahead with panel discussions, comic sales, and celebrities. Attendees typically dress as superheroes or cartoon characters, and Solomon said, “I'm sure there will be a lot of people wearing masks, with people dressed up as Spiderman, so no difference there.”

Wearing masks to stop the spread of COVID-19, however, is not one of the compulsory safety measures being implemented by the convention center and the organizers, although face coverings are recommended.

Comic-Con organizers cautioned all attendees that there will be mandatory temperature screenings before admittance to the convention, and those with fevers will be refused entry.

There will be the obligatory hand sanitizers throughout the venue, and exhibit halls, ballrooms, and breakout rooms will have reduced occupancy monitored by the fire marshal and separate entrances and exits for each space.

The convention center has mandated that attendees cannot gather socially in groups of more than 10 and must stay six feet away from any other groups. There will also be intensive, regular cleaning of high-traffic areas and seating arrangements.

If the event does go ahead, it will be the first large-scale event to be held since March. However, other events scheduled for this summer confirmed and then were forced to reschedule over safety concerns.

MetroCon, a convention for fans of anime, was scheduled to take place at the Tampa Bay Convention Center 10 days after Comic-Con, but has canceled completely with this message to fans: “It is irresponsible for us to encourage not only patrons, but merchants, performers, voice actors, volunteers, and staff to put their health and safety on the line to make this event happen.”

Aspiration and Inspiration from a Female Association Executive
Dec 02, 2021