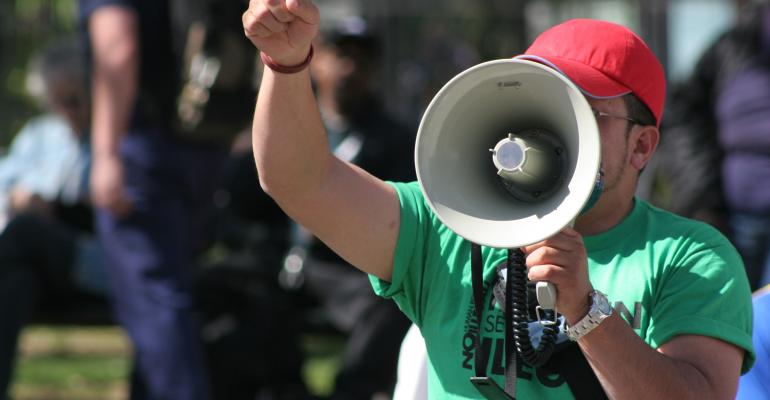 Americans have the right to peacefully protest, and protest they will. Don’t be caught unprepared on site from a logistical or public-relations standpoint.

Whether the target is your speaker, your sponsors, your meeting venue, the topic of the event, or your organization itself, at some point the people's right to express their opinions could come up against your meeting or event. A response protocol needs to be baked into your crisis management plan.

We spoke with Kristi Casey Sanders, senior director of community engagement for Meeting Professionals International, whose organization routinely conducts pre-meeting briefs on the ground rules for engagement in the event of a protest or other disruption. Here’s her advice:

Don’t appear insensitive. The protestors have a right to express their views and to peacefully gather. Work with the facility to give the protestors space that protects them and your attendees.

Safety first. Conference staff should stay away from the protests unless designated to respond.

One voice. Only those people authorized to respond to the protestors or to make a statement to the press should do so. Make sure all staff is clear on who is and who is not authorized.

Prepare. Those who are empowered to speak for the organization should, as much as possible, prepare and rehearse their responses in advance. Above all, don’t go off topic—address the situation but avoid conflict. Don’t get upset or take the protests personally.

Respond quickly. Don’t ignore the protest; there may be safety issues involved. The group could be blocking people from getting in and out of the building, and in some circumstances the police might need to be called. As Sanders notes, even if you have to put out a statement saying that your organization will respond soon to the issues, that’s better than not responding quickly.

Get ahead of it. If you know there will be protests, consider going to the media ahead of time with a statement rather than playing catch up. For example, says Sanders, if your meeting is about stem-cell research and you’re expecting a rally from those opposed, “you might issue a statement on the scientific validity of the research and your organization’s ethical position.

Sanders shared one nontraditional technique that could work: Invite protestors to the stage to express their views clearly and calmly, in order to educate the audience on the reasons for their position. If a protesting group takes you up on that, your organization will be seen as open-minded; if the group does not, then some of the protest's power evaporates.

For much more on handling crisis management for meetings, read our Meeting Planner's Complete Resource for Risk Management as well as this issue of MeetingsNet's digital magazine.