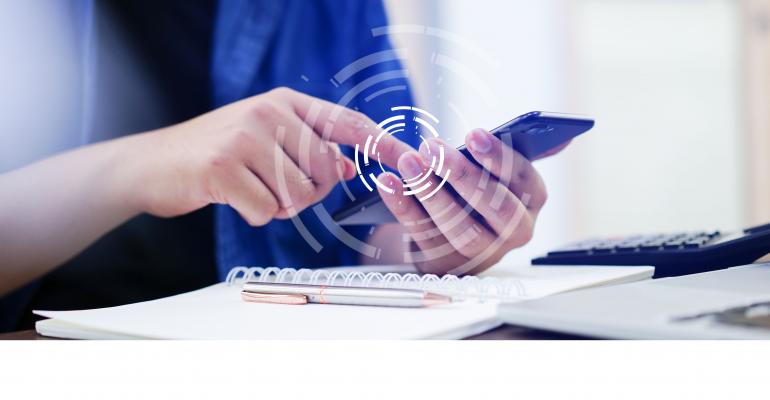 How an App Improved the APhA’s Conference Risk Management

Like any seasoned meeting pro, John Russell, director of expositions for the American Pharmacists Association in Washington, D.C., knows that it’s impossible to think of everything that could possibly go sideways on site during an event. Hurricane? (Been there.) Death of an attendee? (Twice.) A spy in the audience? (Yup, but that’s a separate story.)

Russell oversees two major APhA events each year: a 6,000-person annual meeting in the spring, recently held in March in Seattle, and the Joint Federal Pharmacy Summit in the fall, which attracts about 1,000 attendees. Security for these events falls under Russell’s job description and until the JFPS meeting last October, his risk management process was pretty standard. He has a seven- or eight-page emergency procedure document that includes critical phone numbers; key resources such as the closest hospital; and procedures for what to do under various crisis scenarios. The document is updated for each event and emailed to the 100 people who staff the annual meeting and the 20 people who staff the JFPS event. For the annual meeting, he also holds a security pre-con to go over the document.

Things shifted after a conversation last year with Bob Mellinger, CEO at Attainium Corp., who works with the APhA on continuity planning. Mellinger had designed a new app, called Event Aware, that could put APhA’s emergency procedures on a cell phone; he wanted Russell to give it a try for JFPS 2018 in Kansas City, and Russell agreed.

For Russell, the app had one giant benefit that would supplement the system he was using: ubiquity. “We ask staff to print out the security document, read it, and keep it with them on site—but if something really bad happens, it’s not realistic to think they’re always going to have the document with them. The app puts all of that critical information at their fingertips. We always have our phones with us, so my team has all the information with them 24/7.” Plus, he notes, the app works without Wi-Fi or cell service.

The home screen of the app features 17 icons. The “Local Resources” icon (see below) is where staffers find nearby pharmacies, hospitals, police, and more—all with hot-linked phone numbers. The “Meeting Info” icon covers on-site leadership, the staff's meeting spot in an emergency, travel assistance, and more. Under the various crisis icons, such as “Medical,” “Fire/Explosion,” “Utility Outage,” and “Weather Emergency,” are the steps for what to do, taken from Russell’s emergency procedure document but “boiled down to essentials,” he says. 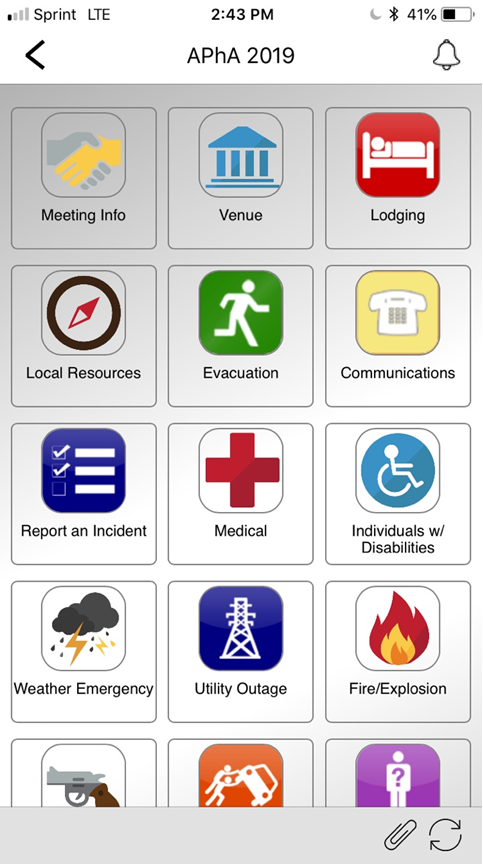 The homepage also includes “Secure Chat” and “Report an Incident” icons, two features that improve AphA’s conference security beyond simply the convenience of having risk management information and procedures in staffers’ pockets. With the “Secure Chat” feature (which does require cell or Wi-Fi service) anyone can start a chat and all staffers with the app will receive it. It’s intended for emergency situations if someone needs to let the group know their status (“not that the F&B hasn’t arrived,” Russell notes). The app’s “Report an Incident” icon makes it easy for staff to submit electronic incident reports, with fields asking the basic "when, where, why" questions, and to take a photo.

Russell used Event Aware at the JFPS in October, then again in March at the annual meeting in Seattle. Fortunately, no major crisis occurred at either meeting to put the system to the test, though there were half a dozen incident reports filed in Seattle, mostly concerning overly aggressive homeless people. “If nothing else, the app gave our team peace of mind,” Russell said. “They knew they had everything they needed. It’s something we’re going to continue to use in the future.”