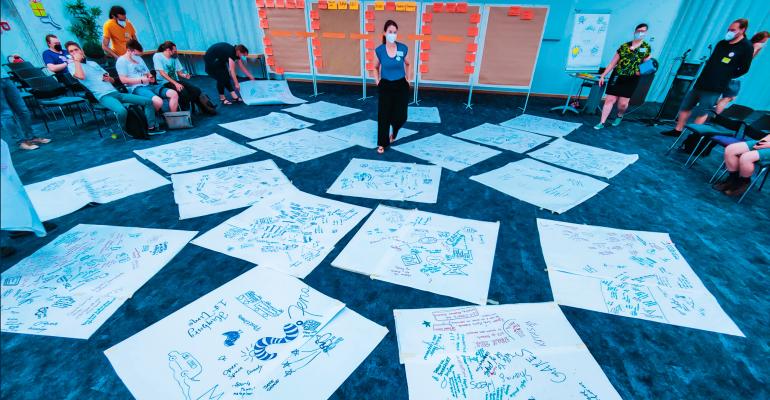 Using the Open Space and World Café formats, the 200-plus attendees dig into the topics that are most pressing for them in a free-wheeling, energizing, productive atmosphere.

For the International Conference for Software Craft and Testing held annually in Germany—known as SoCraTes—event coordinator Tobias Goeschel has a notably less-complicated job than most other business-event planners have. After all, he doesn’t have to build and promote an agenda of session topics, or secure speakers and presenters, or even match breakout-room sizes to each session’s potential attendance number. The attendees themselves take care of those things.

Nonetheless, his role is critically important to event success: create an atmosphere where attendees are comfortable enough to contribute their expertise, advice, doubts, and other perspectives in whichever sessions they choose to attend. That’s because the two formats the conference employs—World Café and Open Space—rely solely on attendees’ input and interaction.

Without a doubt, the concept of an attendee-led conference sounds like a dangerous high-wire act for a planner and host organization. But here’s how the concept has worked for the past 11 years at the SoCraTes conference, and how it could be adapted for groups that have always used more traditional event designs. 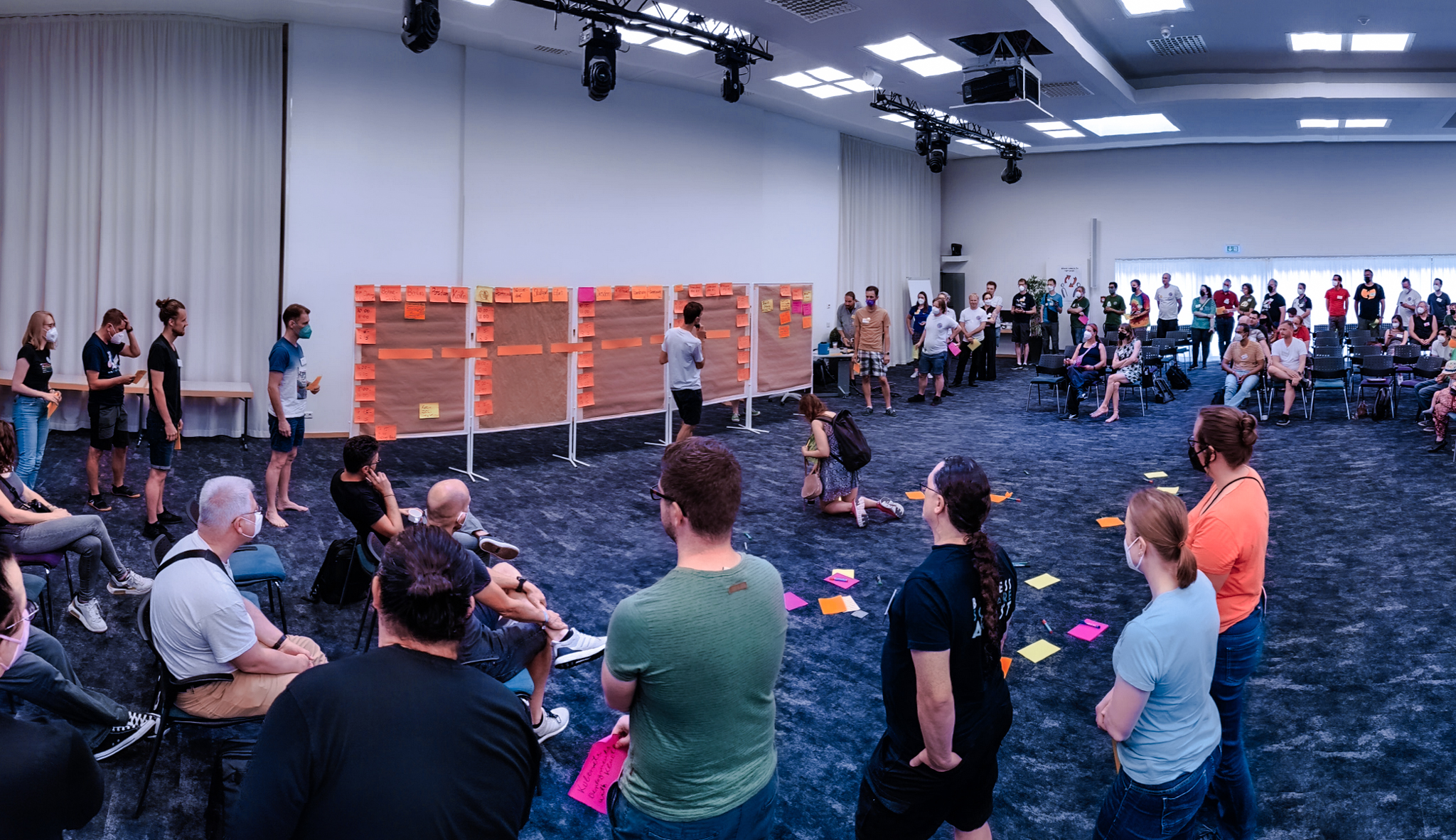 The August 2022 meeting of the International Conference for Software Craft and Testing, known as SoCraTes, embraced the World Café and Open Space meeting formats.

Easing Attendees into the Atmosphere

On the opening evening of the two-and-a-half-day conference, Goeschel uses the World Café format to acclimate attendees to the event’s free-wheeling structure, but also to have them become familiar and comfortble with each other—a key to the success of the Open Space format to be used over the following two days.

In the World Cafe format, the 220 attendees are spread out across eight-person round tables, and an initial question is presented to them: What bought you to this event? Each table gets input from its members, while one person there summarizes the conversation on a flip chart. At the end of 15 minutes, the discussion ends and all attendees except one move to different tables. The attendee left behind briefs the arriving attendees on the previous group’s conversation. Then a new question is presented, and the new discussions at each table are documented. After a third round that addresses yet another question, the flip-chart pages are collected and posted in the prefunction space so attendees can peruse all the pages.

Through this format, “you’ve met 30 to 35 people and have been exposed to a lot of perspectives from fellow software crafters about their needs, expectations, and hesitations, both professional and personal,” says Goeschel. “In a short amount of time, it makes people feel like they have connected with many of their colleagues. This gets people to think more creatively, and it boosts their desire to interact. Then it doesn’t feel awkward if you choose to stand up in front of more than 200 people the next morning and offer a topic for discussion.” 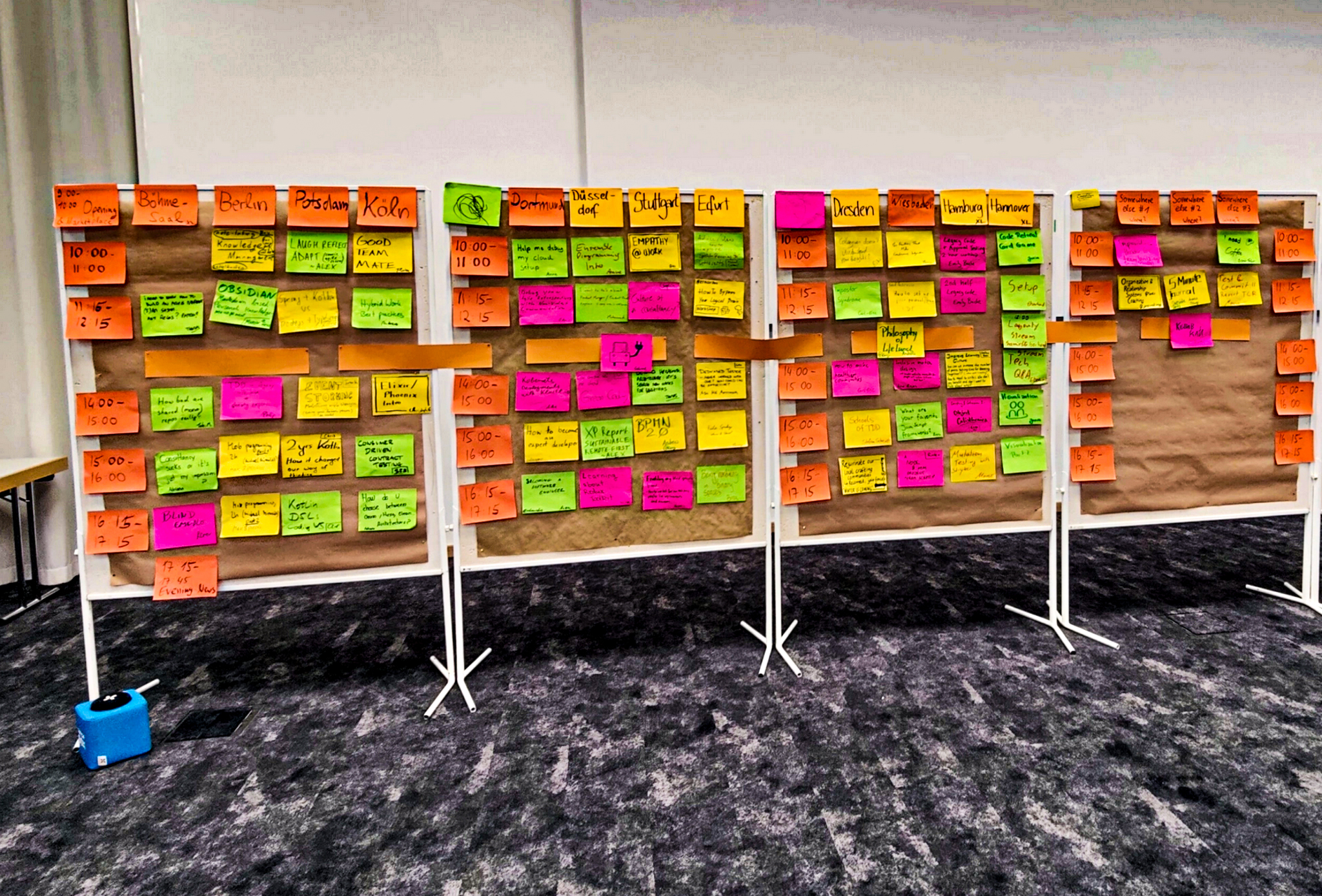 In the Open Space format, any attendee can pitch the group about a session they either want to lead or be part of. Proposed sessions, written on sticky notes, get a time slot; ones that are not well attended can end early and participants move to other sessions. Attendees summarize sessions on flipchart pages.

To start day two, attendees arrive in the main room to find lots of sticky pads and pens set in front of display boards that will, after about 90 minutes, become the event’s “printed” schedule that attendees often snap a photo of in order to have it handy. To build out that schedule, the attendees themselves engage in real-time session creation.

Any attendee who wants to propose a session topic writes it on a sticky pad and gets in the line to explain the idea to the entire audience. At this moment, “what’s really important is to have a facilitator who makes people feel safe and trusting during this segment, so that they will get up and present,” Goeschel says. With attendees allowed one to two minutes to explain their topic, they can either outline an idea they came on site prepared to discuss or offer a topic that struck them once they arrived. Further, attendees can offer themselves as subject experts for their topics or ask that others who have relevant knowledge attend their sessions.

Once all the sessions are outlined for the audience, there’s a 15-minute window to assign sessions to breakout rooms. At the August 2022 SoCraTes event, 10 breakout rooms were available during the two full days when the Open Space format was used, allowing for more than 150 sessions that could range in size from two to 50 people. However, “many times there are proposals similar enough to be combined into one session; attendees sort that out among themselves,” says Goeschel.

In each discussion session, “we ask that there’s some form of record, which could be people taking written notes or even sketches, which are placed on the walls and floor of the main room afterwards.” However, Goeschel notes that “detailing every session is not a requirement for our group because some discussions end up being personal in nature—people might discuss things like mental stress and burnout, or how to deal with your family when working remotely from home,” or another sensitive issue.

For the SoCraTes conference, “the format works because we have only a limited set of rules,” Goeschel notes. “We say, ‘Don’t worry about the session starting late or ending early or that the person that you really want to attend is not going to be there.’ It’s all okay; it’s only about sharing and learning something. And if you host a topic that just one or two other people come to, you can choose to talk for 10 minutes or so and move on to other sessions.”

“The most important rule that we have is this: If you don’t feel like you’re learning or contributing something, get up and go to another session,” Goeschel adds. “This prevents you from just sitting there and being annoyed—the thing that happens at regular conferences. With Open Space, you should never be bored. It’s almost guaranteed that the participants will address the issues that are most important for them.”

How Corporate Groups Could Make It Work

Planners who pitch the World Café/Open Space format combination to their executives for use at a traditional business conference will likely need to make a few alterations versus how it’s employed at events like SoCraTes.

“It is certainly unusual for corporations to be so introspective that they would consider these formats,” says Adrian Segar, founder of event-design consultancy Conferences That Work and author of several books on how best to use participant-led conference formats. “However, when it comes to customer or user groups as well as sales meetings, the beauty of Open Space is that you’ll get these front-line people to not only tell you, ‘These are the things we should be talking about,’ but you’ll actually get them to do it in detail. And the job of the event’s facilitator is to provide a structure and atmosphere for those good things to happen.”

As for structure, Segar notes that organizations could introduce the Open Space format for anywhere between two and eight hours, not necessarily in one block of time, over the course of a multi-day event. This modified approach would ease attendees and executive stakeholders into the format, while leaving plenty of time for other event objectives. Segar says that “doing this for even a couple of hours during a corporate meeting would build trust among attendees, and for the organization.”

One temptation that planners and executives might have for working Open Space into a program is to ask attendees to submit session ideas, and perhaps let all attendees vote on which proposed sessions they’d prefer to attend, ahead of the conference. But Segar says that in his experience, host organizations only get about half as many discussion-topic proposals this way versus having people go through the process on site. “It is a very organic process that has to feed people’s creativity for it to work best,” he notes.

Interestingly, SoCraTes’s Goeschel has a word of warning for organizations wanting to incorporate Open Space into their event formats. “I would not use this format opposite regular, pre-scheduled sessions because too many people will default to those. To get your attendees to commit to the process, don’t provide that safety valve.”

“I understand that the biggest fear of most conference organizers would be that they won’t have enough sessions created to fill the agenda, but we have never had that happen,” Goeschel adds. “One of the mottos of Open Space is ‘prepare to be surprised,’ and that really does happen every time we use it.”

RELATED LINKS:
A Plan for Better Engagement: One Room, Many Formats