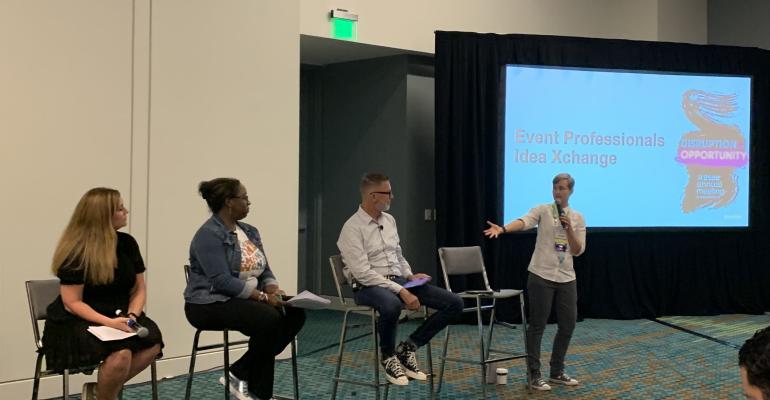 Beth Surmont of 360 Live Media moderated the session at ASAE with strong command, maintaining the time limits and guiding audience interaction within each topic segment, which made the session as productive as possible.
Association Conventions and Expos

At the recent ASAE show, a quick-hitting format called “IdeaXchange” helped association-event planners walk away with ample knowledge to help them plan their meetings and satisfy their attendees.

When attendees walked into the breakout room hosting the “Event Professionals IdeaXchange” session during the annual meeting of the American Society of Association Executives in late August, many didn’t know exactly what they were in for and might not have had enough coffee for the task. As it turned out, the highly interactive format was worth the effort attendees had to put into it.

To start, moderator Beth Surmont, CMP, CAE, vice president of strategy and design for 360 Live Media, introduced a three-person panel of planning veterans. She then engaged each expert on a topic related to association events for exactly two minutes. After those six minutes were up, Surmont asked attendees, who were seated at eight-person rounds, to find a partner to discuss their biggest pain points on that topic and to brainstorm possible solutions. After five minutes, attendees found another partner and did it again.

To bring the audience’s attention back to the stage, Surmont clapped loudly once and yelled, “If you can hear me, clap twice.” She then clapped twice, with some of the audience joining her, and yelled, “If you can hear me, clap three times.” More of the audience responded to that, and the dozens of conversations began to die out. Just once in the 75-minute session did Surmont have to clap and yell as many as five times to restore order. Lastly, attendees were given two minutes to write down what they learned; Surmont then moved on to a new topic.

As attendees left the session, several remarked that the format’s “bang for the buck” was high in terms of the number and quality of perspectives and ideas they gathered. Surmont noted that the format “simply seeds people’s brains on a given topic” and then lets their conversations flow in whichever direction attendees’ personal experiences leads them.

Further, some said they were impressed by the moderator’s control of the session’s time and attendees’ behavior. Megan Miller, CMP, director of events for SBI Association Management in Seattle, said that “this is a format I’ll definitely consider for our future events.”

Today’s Toughest Planning Tasks
Surmont focused the session on a few topics that are most pressing to association planners right now. Under the heading of “post-Covid event mindsets,” panelist Earla Jones, CMP, director of conference services and operations for the American Library Association, noted that “we cannot say to our potential attendees, ‘We’re getting back to normal.’ Too many people had traumatic experiences personally or professionally during the Covid pandemic. So, they don’t believe that and they don’t want to hear that. We need to acknowledge that the old normal is gone and that we’re searching together for a new foundation,” which will drive demand for an association’s events.

Sharyn Weiss, director of strategic partnerships at the Council for Exceptional Children, said from the stage that “people want well-being in their event experiences now. They want to be cared for as a whole person, not just in their job duties,” and that associations must adapt their attendee offerings through creative sponsor opportunities that focus on the well-being mission.

In that same vein, “fulfilling sponsor ROI after Covid requires new ideas,” said panelist Charlie Jones, FASAE, CAE, senior vice president of global brand management for the Futures Industry Association. For example, “we need focus groups with sponsors to see what they want. Naturally, they want time with attendees. So, can we use our keynoters and some other presenters to conduct additional small sessions where sponsors and selected attendees mingle? It’s still education but it’s also sponsor time with a high-quality audience.”

For associations to get the best ROI for themselves, Jones said that planners must adapt to the new environment found in the hotels and venues they’re partnering with. “We have to be great communicators in every direction now. Give the full backstory of your meeting to the department managers at each property, because the labor shortage means that many of them have taken on responsibilities they’ve never had before.” Agreeing with Jones, Weiss added that “I can have four or five conversations with people on property before they finally understand what we need. Be patient but be persistent—and get service guarantees for the contracted rate.”

On a topic that will be a thorn in planners’ side for years to come—should the annual meeting be a hybrid, and if so, which event elements should be available to all attendees?—Jones and Surmont said the same thing: Associations should save their strongest interpersonal experiences for the live event. For instance, “coaching sessions should only be available to on-site attendees,” Jones noted. “Activities like that are why people make the trip to your convention.”

However, keeping such elements unavailable to virtual attendees does not mean associations must lowball their virtual-attendance pricing. Doing that could not only hurt in-person attendance but also potentially affect member perception of content quality, said Jones.