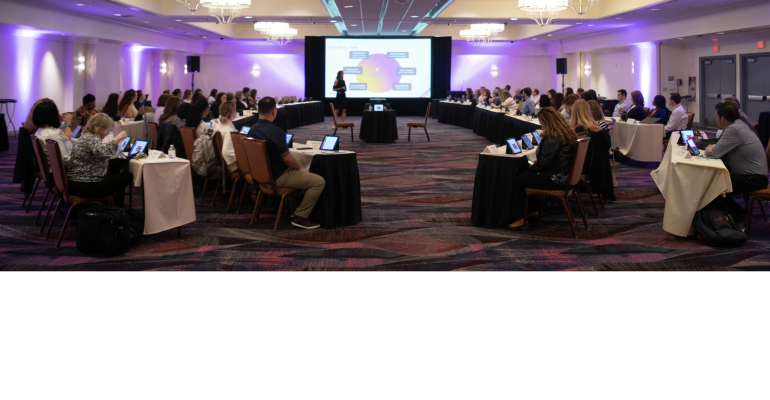 The key: A fully dedicated second screen in attendees’ hands, which allows for a more-interactive set-up while also gathering data to prove session effectiveness.

A few years back, Joe Lipman, president of Summit Management Services, saw electronic tablets being used by attendees of a pharmaceutical meeting. At that moment, a thought hit him: None of the attendees were looking at their mobile phones.

Lipman, whose firm hosts 20 to 25 investigator meetings worldwide each year, soon went about redesigning how Summit conducted those events to run more content elements through a dedicated second screen that would be in front of each attendee. He partnered with Array, a content-management firm focused on life-science events, to use Apple iPads that feature only the event’s app along with Array’s software for audience participation, polling, tracking, and other tools for the meeting host.

A New Approach
In the past, Summit’s investigator meetings had attendees in dozens of rows of chairs, all facing the same direction. And in addition to the stage screens, other screens and sound systems would be staged throughout the room to make sure everyone could see the slides and hear the presenter. But such a set-up “made it easy for people to feel disconnected,” says Lipman. “It was common to see people on their phones or laptops, doing other tasks. Given the importance of the information conveyed at these events, the low level of engagement was both a disappointment and potentially harmful to our clients seeking to create successful clinical trials.”

Most important to Lippman was that a dedicated second screen would bring every attendee closer to what was happening on stage. Also, the tablets would collect a variety of data to inform the client about levels of engagement at particular moments. And for remote attendees, they can see the speaker as picture-in-picture along with the slides and share the same experience as on-site attendees.

With the tablets, attendees can enlarge the slides being shown on the in-room screens and take notes at the same time. They can send questions to the session leader, who can choose to answer specific ones via a message directly to each questioner, prompt the speaker to pause and answer a question immediately, and leave others for a closing Q&A. Meanwhile, the session leader can use surveys and polls between each topic segment to gauge understanding. Also, evaluation surveys can be placed on screen at the end of every session.

Through the tablets, translation services for presented content are available for on-site and remote attendees alike. When study coordinators, nurses, or other clinical-trial members aren’t comfortable with English, Summit offers a different channel on the second screen for a translated version. “In the past, we had to get the presentation documents to translators two weeks in advance,” Lipman notes. “We can now bring them in virtually for a pre-event slide review and send the documents to them so they can prepare.”

At the end of a meeting, the iPads are collected, the notes of remote attendees are also collected, and the presentation materials each attendee selected are emailed to them. The meeting host then has a wealth of data to judge success in building attendee knowledge and to see how well each speaker and content segment were received. The summary report also shows the results of all polling and surveys, revealing potential knowledge gaps.

“Seeing attendees’ notes alongside session materials is so helpful,” Lipman says. “If someone put a question mark next to a certain bullet point or wrote a question in the margin, there is an opportunity to clarify for that person or the whole audience.”

One Change Brings About Others 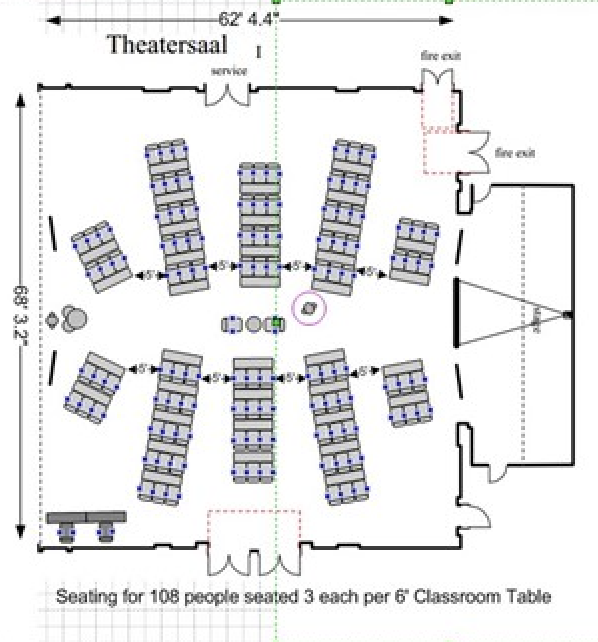 Interestingly, using the tablets allowed Lipman to use different seating arrangements that encourage peer-to-peer engagement during sessions. With classroom or theater-style no longer necessary, he puts presenters in the center of an in-the-round layout, with attendees sitting at three-person tables that are no more than five rows from the presenter (see image).

Lipman also incorporated some casual chairs, sofas, chaises, and table-and-chair combinations on the perimeter. Given many attendees’ physical difficulties—most of which are unseen—“people can choose seating that suits how they want to learn,” he says. 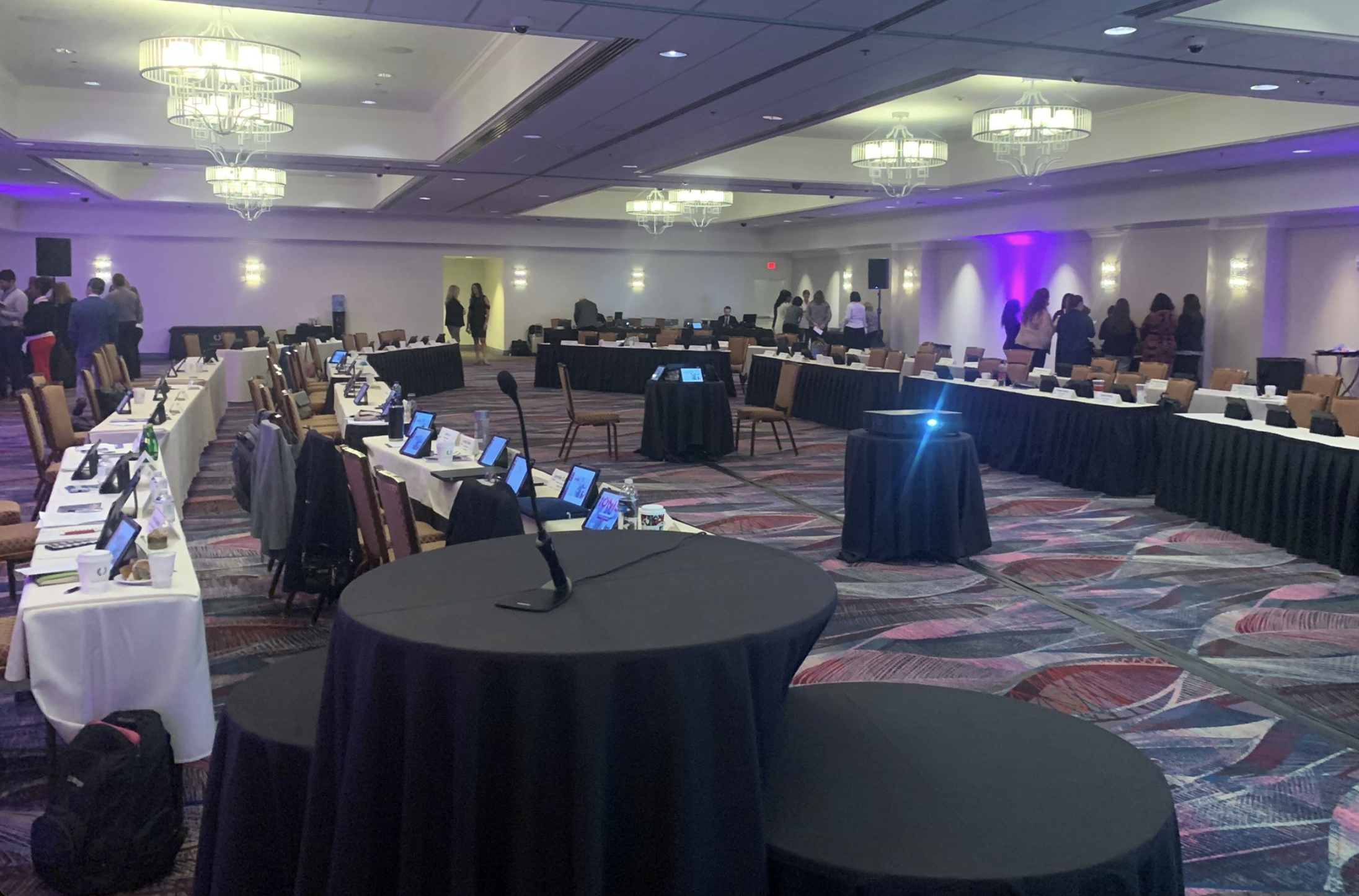 The new layout requires a somewhat larger space; in some cases, events that previously required one section of a ballroom now require three. But Lipman notes that this allows space for attendees to gather in small groups and briefly discuss a topic among themselves during a session, either at their table or in a nearby open space with three other attendees (see photo). And as a balance to space costs, using tablets reduces the number of presentation screens and sound systems needed.

Seeing hybrid events as a lasting concept, Lipman has already scheduled seven such events in the next year. “There’s the potential for host companies to pick up 20 attendees who would never participate in person, but who will dedicate two to four hours of a day to the most important section of a meeting.”

With the use of tablets and the new room layout, Summit’s investigator meetings have seen a 99-percent overall engagement rate, while the virtual audience’s engagement rate has registered at 97 percent.