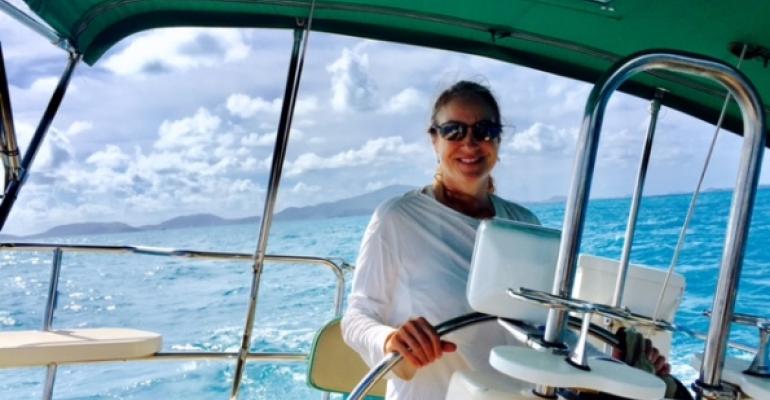 Sailing Away: How Meetings Should Be More Like a Pirate “Happy Arr”

Some day, I will go on vacation sailing in the Caribbean and be able to completely turn off the, “hmm, this reminds me of meeting planning” lobe of my brain. That day, me fine mateys, is not today. So let’s cast off the dock—be it at the marina or the loading variety—and hoist up the sails on the good ship “What sailing in the Virgin Islands taught me about meeting planning.”

A few of the things that shivered me plannin' timbers:

1. Always rig the system. While those are fighting words when it comes to politics, for sailing and meeting planning, you always want to sheet up for the worst of likely conditions you may encounter. We didn’t get the usual strong-but-steady Christmas winds that make sailing in the U.S. and British Virgins so lovely in January. Instead, we got some highly variable winds that blew from 6 knots to 30 knots. After some discussion, we decided to put some reefs in the sails to start off (which shortens the sails, making it easier to control the boat in high winds), and shake some out if the weather proved calmer than predicted.

Likewise, planners should always have a plan in place to handle the worst of circumstances and keep your meeting from turning turtle. It’s always easier to let some sail out when you’re under way than to sheet in when that nasty squall hits.

This time around we chartered a 36-foot Island Packet, whose deep keel makes for excellent control and stability (and it’s drop-dead beautiful to boot). But there’s a trade-off, of course, because the very thing that made our Paradiso stable in those gusty winds also made her, well, not the speediest of vessels.

For meetings, we also have to acknowledge that there will be consequences to choices, that the cool unique venue may add visual excitement but may not have much in the way of AV, say, or the celebrity speaker may be a great draw, but may not be willing to tailor her presentation much to your audience.

3. Never pass up the chance to shake your booty at a pirate “happy arr.” Even though we were really not in the mood when the sun passed over the yardarm that day, we went ashore at Leverick Bay on Virgin Gorda for the most ridiculous, hokey, fabulous Michael Beans “Happy Arr” show. So, so many things that guy dressed like a pirate did over his two-hour music/comedy experience that rang my meeting-planner bell:

• He acknowledged up front that the show was “so corny you won’t even believe it,” and it was. And the cornier it got, the more the crowd got into it. One recurring shtick that worked was to have the crowd yell “ARR” to complete a word. I can’t remember a specific example, but along the lines of,

Beans: “And one thing was so spectacul…”

So stupid. So fun. So perfect for this particulARR crowd, many of whom came with some semblance of pirate garb on.

• He created a sense of community from the get-go, pointing out the commonalities people in the audience shared (sailors, escaping from cold places, anniversary-celebrators and honeymooners, etc.). He reinforced that sense of community throughout by calling us “shipmates,” and even at one point split up the audience as if we were on different sections of a sailboat, then had us pantomime doing tasks related to our section of the boat (hoisting sails, weighing anchors, etc.).

• Maracas on the table were there for us to shake to the tunes throughout the show—but they weren’t just props. They were made by children on Ile a Vache off the coast of Haiti that he works with through the Good Samaritan Foundation of Haiti. This brought a touching CSR aspect to the event (he later passed a pirate hat that came back to the stage empty of brochures and full of donations).

• Audience participation all over the place, from the aforementioned maracas-shaking to sing-alongs to having people shout answers to riddles and questions, then come up on stage for a prize (a swig of rum mainly for the grown-ups, trinkets for the kids), to photo opps on the stage, to a conch-blowing content.

• Which brings me to the one thing he blew, IMHO. It literally ended on a weak note with that conch-blowing contest, which of course took forever and if you or a loved one weren't taking part, it was beyond boring. We left and went to dinner.

4. If you don't have the tools you need, improvise! Who needs a sewing kit? There's nothing duct tape can't fix, including the rip in the knee of my pants.

7 Things I Learned About Meetings from Sailing in the Caribbean
Jan 28, 2013

Is There No Escape from the Meeting Planning Mindset?
Feb 05, 2016