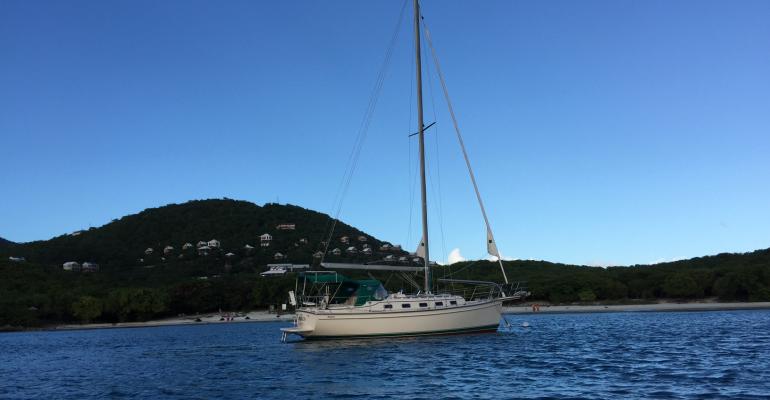 My husband and I were fortunate to be able to spend about 10 days sailing around the U.S. and British Virgin Islands over Thanksgiving—and yes, it was awesome, thank you so much. But I won’t bore you (too much) we a “what we did on vacation” report. However, I had a lot of time to think while hauling in the mainsheet and sipping rum drinks. As always, my thoughts drifted to meeting planning—yes, I probably do need to take a vacation more often! Anyway, here are a few connections I made between what we were experiencing at sea and what you all do every day.

• Keep a close read on the situation at all times. In my case, I mean this all-too literally—my Kindle chose our third day in to finally die a grotesque and ill-timed death. I don’t know about you, but the thought of being on vacation with no access to reading material was, well, unthinkable. Fortunately, I had a backup plan—or three, actually. I still had one big, fat Vanity Fair left over from the magazines I brought to read on the plane, which got me through until we could find a Wi-Fi hotspot where I could download some books into my iPad Kindle app. Whew! And I put a few on my phone as well, just in case. Not ideal, but it got me through, though I now know just how long it takes to charge an iPhone on a boat DC adapter—approximately forever.
Meeting connection: If your meeting has gone paperless, as so many have, be kind to those who can’t download your app because they have an ancient flip phone, or no gadget at all, or just really want a physical handout. Be ready to print out a few copies of your conference materials if you don’t want to bring them with you, and find ways other than your app to announce schedule changes and special promos to these folks. And always have a backup plan (or three) for every contingency you can think of, whether it be an extra chunk of budget to handle unexpected expenses or a way to get a Kosher, gluten-free, vegan, GMO-free meal for someone who previously had not expressed any food preferences. But, because you can’t think of everything…

• Expect that boom times will go bust. You could be cruising downwind in a light 15-knot breeze, enjoying the scenery and patting your team on the back for being able to achieve such a smooth sail. Then you look ahead and see the bolts holding the jib boom to the deck shearing off one by one until the whole thing suddenly busts free. If that thing gets to swinging around, it could take out who knows what, but it could be catastrophic. Yikes! While we didn’t have a backup plan for exactly this situation, when it happened, we knew to quickly head upwind and take that puppy down and secure it as best we could until we could find a safe harbor and take stock. Part of the reason we could do that was that we always give ourselves enough leeway from shores, reefs, and other boats while under way so that we will have the time we need to figure out what to do next.
Meeting connection: While you can’t plan for everything, you can make a general plan for how to handle just about any situation that comes up. And it starts with knowing what to do to ensure everyone remains safe and secure, then giving yourself time to assess the situation and consider your options, whether a tornado pops up over your venue, or your keynote speaker didn’t show up, or an attendee keels over with a medical emergency mid-session. Another monohull that was out the same week we were found itself in a rocky situation as well, but had not left itself enough wiggle room to be able to take stock of the situation and find a solution. They ended up literally on the rocks, having to be airlifted off a sheared-in-half boat. Fortunately, no one was seriously hurt, but the boat was totaled. Always build yourself a cushion for those unknown, awful what-ifs, because you never know when they will happen, only that, eventually, they will.

• Correlation does not equal causation. For some reason, this kept coming up on our recent trip. The full-keeled boat did not like to tack into the wind, but if I gave her my best cheerleading routine, she usually would come all the way about. And, right before the boom busted, I was thinking to myself how we really don’t have a lot to say when we get home unless something goes wrong—the best stories seem to come out of the worst situations. But, tempting as it is to feel so all-powerful, I know that my thoughts and actions really had nothing to do with what happened in either case.
Meeting connection: When things go right, or especially when they don’t, be sure to look deeply into all aspects of what’s happening to find what is really causing it, not just what you want to think or what looks, on the surface, to be the cause. And don’t be too quick to take the blame, because, while I know planners like to have total control over everything that happens on their watch, sometimes you really don’t. What always is in your control is how you react.

• Spend some time on the cloud. And I don’t mean the Internet one, either. As I waited for the interminable charge-up of my iPad, I found myself lying on the deck staring up at the clouds as they shifted from looking like puppies to ponies to pirates. I can’t remember the last time I did that, but it was amazingly freeing.
Meeting connection: I know you barely have time to breathe while the meeting is in full swing, but when you reach whatever is your safe harbor, take some time to unplug and listen to the world around you. Connect with what makes your inner child goggle in awe. Feel the swells beneath you, the stars above, listen to the island goats bleating, the clang of the halyard on a nearby boat, inhale the smell of teak. Get out of your head every now and then. You, like I, will be so glad you did. I just hope you don’t have to break any devices to make yourself do it!

7 Things I Learned About Meetings from Sailing in the Caribbean
Jan 28, 2013