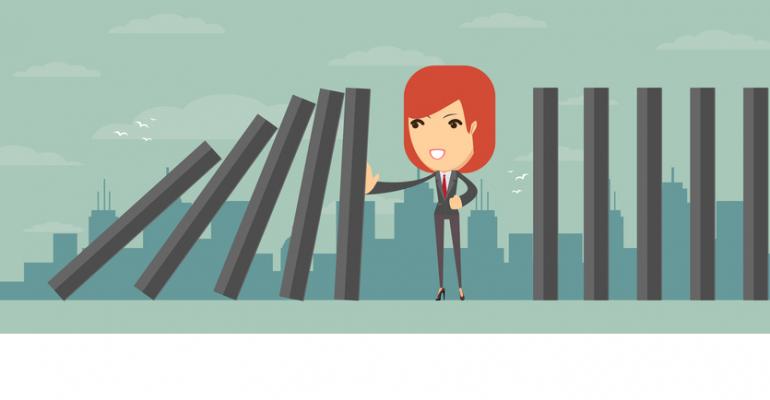 Handling Conflict: All Eyes on You

Six real-life meeting crisis scenarios—what would you do?

We’ve all been there: a crisis arises on site and all eyes are on you to solve the problem. How do you stay calm while showing a sense of urgency? What should you communicate to the executive who is upset with a situation? How do you recover when things go off-script?  Jennifer Squeglia, CMP, RLC Events, Inc., led an interactive discussion at the Financial and Insurance Conference Professionals Association Annual Conference, sharing real-life conflict scenarios from a panel of experienced FICP members and getting the audience to consider how they would have responded.

Scenario One: Unwelcome Neighbor
XYZ Financial Company books a meeting, taking all the hotel’s meeting space, except for one room.  When contracting, it negotiates a competitor clause to ensure that none of its rivals books a meeting at the same time. On the day of the event, the planner is in the midst of final preparations when her executive discovers that one of the company’s top competitors is hosting a catering event in the room next door, the only room XYZ didn’t book. The executive is angry and looking to the planner to fix the problem—and quickly. The session is starting shortly.
What would you do?
Ideas from the audience: Find the convention services manager…quickly move the other event to a hotel restaurant to get it away from the meeting space…tell the hotel that you’re informing the company legal department and cite the contract…upgrade the executive to a suite…find the other group’s planner to discuss the situation
What actually happened: Both sessions were starting within a half hour so there wasn’t time to move the competitor’s group. The planner called the CSM and the two of them figured out that if they changed the entrance to the catering event to the door on the far side of the room, away from her group’s entrance, there was less of a visible impact. Then the planner added extra security to ensure that there was no mixing of the groups. On top of that, the executive did get a “nice upgrade.”
Takeaways: Solve in the moment, and react quickly. There’s no time for blame when a solution is needed quickly. Make sure that your competitor clauses are conveyed to the people at the hotel booking catering events as well as those who book meetings and conferences.

Scenario Two: Resistant to Treatment
At a festive, high-profile awards dinner, a woman develops an allergic reaction to a spider bite. The rash is beginning to spread, but the attendee does not feel she needs treatment. During the cocktail hour, she and her guest begin arguing, fairly loudly, about need to for medical attention. The planner lets her know that someone is available to take care of her, but she refuses.
What would you do?
Ideas from the audience: Let the hotel know what’s happening and make security aware of the situation…discuss the possibilities for medical emergencies at the pre-con so you know what resources are available and where medical are located
What actually happened: The planner carefully walked the line between being assertive and letting the attendee who needed medical attention know how much the she cared and that she would be well taken care of. In the end, the attendee was treated at the hotel and needed to leave the awards dinner.
Takeaways: The way the planner reacts to crisis situations sets the tone. It’s important to convey the situation to the executives to keep them in the loop.

Scenario Three: Power Play
You are overseas for an incentive program that includes just one 90-minute business meeting. This is the only opportunity for the CEO, company president, and chairman of the board to deliver their messages to attendees. Five minutes before the session starts the power starts blinking on and off in the ballroom. There is a language barrier between hotel engineers and the production team, but they say (somewhat unconvincingly) that it shouldn’t happen again.
What would you do?
Ideas from the audience: Talk with engineering to ensure that everyone is safe
What actually happened: The planner immediately called the conference services manager and, after a huddle, decided to trust the production professionals who believed the power would stay on. To make sure the executives on the agenda weren’t caught off guard, they briefed them on the situation so they could be ready. In the end, the power stayed on throughout the event.
Takeaways: Trust your partners, stay calm, and always be transparent with executives to prepare them for all possibilities.

Scenario Four: Treading on Thin Ice
A senior executive consistently insists that the meeting planning team have a treadmill or other expensive piece of exercise equipment set up in her hotel room at the company’s expense—despite the fact that the meeting hotels have well outfitted fitness centers. At the same time, the planning department has been mandated to cut back on excessive costs. How can a planner address this without jeopardizing her job?
What would you do?
Ideas from the audience: Talk with the executive about the budget mandate… contact the executive’s boss to ask him or her to explain the mandate…reach out to an exercise equipment company to get a deal on the equipment
What actually happened: The planners talked to their manager who spoke to HR about the situation. Ultimately, the executive was fired. The exercise equipment was part of a pattern of financial overstepping.
Takeaways: Speak up. Don’t go along with unethical behavior.

Scenario Five: Midnight Medical Call
For an incentive program in an international destination, an attendee with several health issues does not pack his medications in his carry-on, despite travel instructions from the planning staff to do so. They are in his checked luggage, which is lost by the airline. The medication is experimental and not readily available overseas.  The first evening the attendee contacts the planner at midnight telling her he needs the medicine. He and his spouse are upset and stressed out.
What would you do?
Ideas from the audience: Contact the hotel, find out about a doctor on site, and see about getting replacement medications…reach out to a medical hotline…try to reach the attendee’s doctor back home
What actually happened: The planner had worked with the hotel in advance of the incentive to understand the available medical facilities and physicians. The hotel contacted a local doctor to make a house call. The doctor contacted the attendee’s regular doctor, determined a course of treatment, and got a local pharmacy to open in the middle of the night to fill the new prescription. The doctor monitored the situation over the course of the program. The planner kept executive leaders appraised of the situation.
Takeaways: Attendees won’t always read your travel instructions. Know your medical resources, communicate, and stay calm. Having the doctor meet with the attendee and his spouse and have a conversation in English went a long way toward lowering their anxiety.

Scenario Six: Useless and Annoying
You and your team are managing a multiday intensive program.  It is last day of the program and one of your planners shows up late and hungover. She is almost useless for the team, and the rest of the planners—who showed up on time—are already tired and they’re aggravated that they have to pick up the slack.
What would you do?
Ideas from the audience: Send the hungover planner back to her hotel room.
What actually happened: Exactly what the audience suggested—out of sight, out of mind. Removing the hungover planner keeps the other planners from feeling annoyed.
Takeaway: The show must go on. Handle it privately.