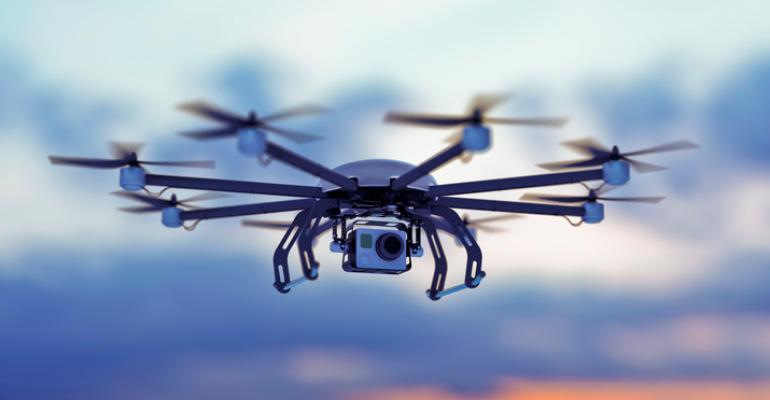 Drones: Moving Into Events at the Speed of Flight

Drones, those remote-controlled quadrocopters you probably have seen and heard whining overhead—have come a long way from their early role as solely military tools. They’re now being used in industries ranging from real estate to beachside shark spotting to virtual venue site inspections. In fact this more than $20 billion industry, which is predicted to grow up to $140 billion by 2020, also is winding its way into meetings and events, providing a downrush of excitement for audiences of all kinds, according to Christine Hilgert, CMP, senior vice president of meetings, Meeting Expectations.

Hilgert, whose company produces drone events, competitions, and races, gave a few examples in a recent MeetingsNet webinar of how you can incorporate these unmanned aerial vehicles to add some serious buzz to your next event.

1. The “Game of Drones”: Drop a note in the conference bag (or on the event app) inviting participants to earn their wings by visiting select sponsors on the trade show floor. Once they collect their pilot pins from the sponsors, they go to the host organization’s booth, where they learn about flying drones from pro pilots. Participants then are led to the drone racecourse area, where they can experience drone racing for themselves. “It was a lot of fun, easy to put together, and not too expensive,” she said. Another option is to replace the racetrack with an obstacle course designed for drones.

2. “Tinkering trails”: Calling it “like Legos for adults,” Hilgert said a build-a-drone program also is usually a big hit with groups that are looking to do something a little more technical than building a bicycle. Groups work with a pro pilot, wiring and soldering to assemble the motors and camera, learning to work as a team as they learn how to build and fly a drone. For a future program, she said, they plan to include a science, technology, engineering, and math, or STEM, student group, bringing a corporate social responsibility angle to the activity.

3. High-flying visuals: Because they are equipped with cameras, drones can provide some amazing footage, both still and video, to bring a new perspective on the general session, trade show floor, or evening gala. Or you can put virtual reality goggles on your attendees and let them experience the drone perspective on a personal level. “We had a pro pilot really rev up the drone to flip through the air going 75 miles per hour. It was like a NASCAR racetrack experience” only in the air and virtual, she said.

Related: 4 Things You Should Already be Using Drones for at Special Events (includes a checklist of what to expect when hiring a drone photographer)

4. Mind-blowing light shows: While your budget may not be amenable, some events are using drones to produce amazing outdoor shows. Here are just a few examples to spark your creativity:

Drones dancing to Beethoven video shown at a CES 2016 keynote

Getting Federal Aviation Administration permission to for an outdoor drone extravaganza may perhaps be more than you want to take on, but drones also can dance indoors, as they did at CES 2015 with this Parrot Bebop number:

And if you get Cirque du Soleil involved, you get something really magical.