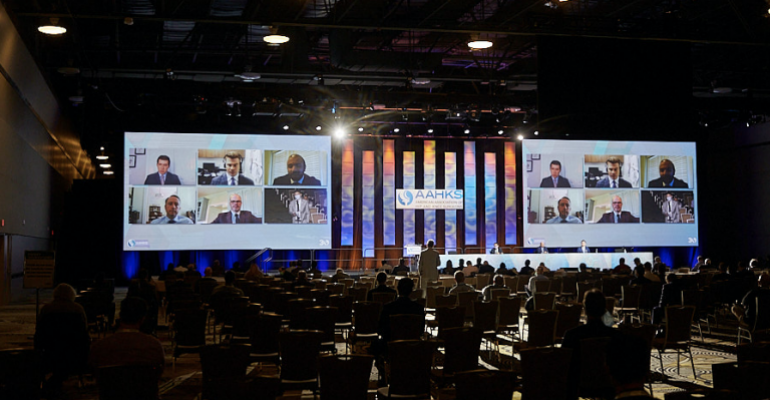 The American Association of Hip and Knee Surgeons used the Hilton Anatole for its hybrid meeting in October. Some attendees stayed in their guest rooms during large general sessions and watched through their televisions, opting to mingle in small groups later.
Event Tech & Virtual Meetings

The American Association of Hip and Knee Surgeons takes the plunge, with promising results.

Part 7 of our 7-part series on planning hybrid events. To read the rest of the series, click the links at the end of this article.

In October, Hilton tested its hybrid platform, dubbed EventReady, by hosting a meeting of its own. From event hubs in London, England, and McLean, Va., each with small in-person audiences, the hotel company’s executives broadcast to top customers gathered for “viewing parties” at 25 properties around the world as well as 4,200 virtual attendees.

Kelly Knowlen, executive director of sales engagement and special events for Hilton, says that her team made a few accommodations with content to make the event more convenient for attendees on the other side of the world. For instance, “we prerecorded our Pacific Asia-focused speakers to account for the time zones” of those watching in the Far East, while for live sessions “we didn’t use real-time chat and Q&A functionality, but instead conducted surveys ahead of time to get the content right.”

With the live presenters, “we encouraged them during rehearsal to be less focused on the exact wording of their scripts so that their personalities would come through,” Knowlen says. “We also reminded them to look at the camera almost all the time even though they had some attendees in the room. It’s not natural to do but it helps with virtual engagement.” All the preparation paid off: The overall attendee rating for the event was about 9 out of 10.

A month later, the American Academy of Hip and Knee Surgeons held its annual meeting at the Hilton Anatole in Dallas. The association and its longtime event-production partner One Smooth Stone used the EventReady platform to broadcast the Friday-to-Sunday meeting to more than 1,000 virtual attendees—but also to on-site attendees who wanted their interactions to be only in small groups.

With about half of the 500 in-person attendees choosing not to sit in the ballroom, “we livestreamed the sessions not just to virtual attendees but also into our guest rooms through the television,” notes Mark Zarski, executive director of AAHKS. “There was an event host on stage guiding the program through a mix of in-person presenters and prerecorded remote presenters. Screen formats were kept the same for the live and recorded speakers to maintain continuity and minimize audience awareness of switching between live and recorded presentations. The recorded speakers were coached to dress professionally, address the event host by name, and say ‘good morning’ or ‘good afternoon’ as if they were live.”

The most technically challenging element was an interactive session involving a speaker who, though remote from the Mayo Clinic, was able to switch slides in his presentation based on audience responses to polling conducted through the event’s mobile app.

After every four 10- to 15-minute presentations, both the live and prerecorded speakers engaged in a Zoom-supported Q&A with attendees. Remote attendees submitted questions via the mobile app and an in-person staffer delivered them to the presenters.

“We also had a video crew roaming the conference to produce quickly edited videos that we broadcast during breaks to give virtual attendees a feel for what was going on in person,” Zarski adds. “And we prompted the host to acknowledge the virtual audience frequently and explain what was going on a little more than you would when everyone is in person.”

Among virtual attendees, 35 percent watched every session of the conference. Following the event, attendees could watch individual segments, which were indexed and paired with quizzes so those who didn’t participate in real time could still earn CME credit.