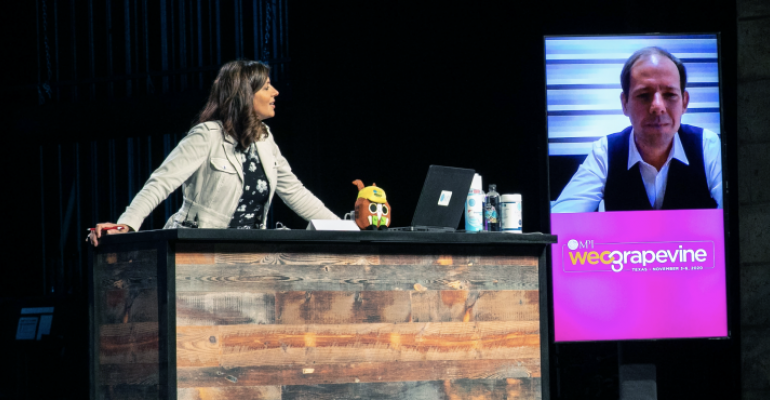 MPI set up the main stage at its World Education Congress to deliver a high-quality broadcast to virtual attendees, then gave them a breakout agenda that was mostly different from the in-person audience.
Event Tech & Virtual Meetings

Part 5 of our series on planning hybrid events. To read the rest of the series, click the links at the end of this article.

The idea was that by creating separate schedules for the two audiences, MPI could present each session in a way that was most effective for each audience. “The only in-person sessions that were livestreamed were our general sessions, and we engaged the virtual audience in real time with things like ‘fan cams’ and a European region co-host,” says Melinda Burdette, CMP, CMM, HMCC, director of events for MPI.

Jessie States, CMP, CMM, director of the MPI Academy, oversees the digital version of World Education Congress. She notes that “many of our in-person instructors presented sessions in green-screen rooms for broadcast to digital participants. Also, some virtual sessions were delivered from the homes and offices of presenters around the world.”

“We wanted our digital audience to be able to engage directly with the instructors and facilitators so they could impact the course of those conversations, connect digitally with one another, and see each other’s video feeds,” States adds.

As a bonus for virtual attendees, during the midday live broadcasts from the broadcast studio at the Gaylord Texan, they could view the prefunction and lobby spaces to see firsthand some of the on-site event’s Covid-19 safety and health measures.

There were four concurrent sessions in each time slot for the in-person experience (attendee price: $799), and three concurrents per time slot for the digital experience (attendee price: $299). “That was largely a staffing decision,” States says. “On site, a single person can monitor multiple breakout rooms.” Spreading the virtual schedule across two additional days helped with this.

For WEC 2021 in mid-June, MPI will again go hybrid from one in-person location—Caesars Forum in Las Vegas. On the virtual side, though, a couple of things will change. First, “we underestimated the number of staff needed to manage the digital experience. You need a moderator for each room to monitor the chat, mute participants, and generally manage the technology.” As a result, more personnel will be assigned to virtual-related roles in 2021.