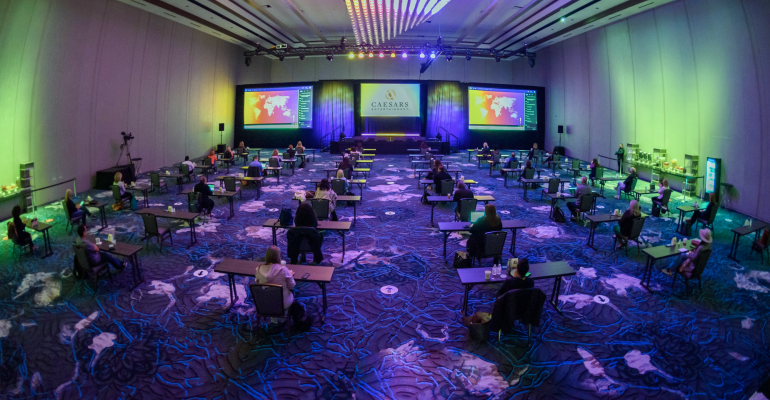 About 150 attendees of PCMA’s Convening Leaders event gathered at the new Caesars Forum in Las Vegas, where they were able to network and discuss business in between sessions broadcast from Singapore and other sites.
Event Tech & Virtual Meetings

Part 6 of our series on planning hybrid events. To read the rest of the series, click the links at the end of this article.

In mid-January, the Professional Convention Management Association conducted its annual Convening Leaders conference as a hybrid event. The meeting used the Marina Bay Sands in Singapore as the hub site, bringing together some of the association’s leadership, a few of the keynote presenters, and an in-person audience of 300 attendees. It also had in-person “spoke” sites in six U.S. cities that hosted anywhere from 50 to 150 people, plus a worldwide online audience of more than 3,000.

The event’s virtual agenda spanned five days, while the in-person portions lasted two days in Singapore and at a few spoke sites, and a single day at other spoke sites. As a result, many of the breakout sessions were prerecorded and delivered at different times each day to accommodate attendees in different regions of the world. However, some were “simulive” broadcasts, meaning that the presenter was available for live Q&A during the showing.

For remote keynote speakers such as Thomas Friedman of The New York Times and Olympic champions and social activists Megan Rapinoe and Sue Bird, PCMA event host Holly Ransom asked follow-up questions from a studio in Melbourne, Australia. In another keynote, Ransom interviewed former Australian Prime Minister Julia Gillard in the studio. All keynotes were presented live for in-person sites in the United States but then rebroadcast later that same day for other regions of the world.

Between main-stage presenters, each in-person venue conducted its own breakout sessions to give on-site attendees a chance to interact. However, a few of the breakouts were also broadcast to the virtual audience. For instance, one session that streamed from the Gaylord Rockies Resort & Convention Center was attended by several hundred remote attendees, including Shayna Moskowitz, director of meetings and technology for Part 2 Events. “The topic for that breakout was how to plan safe in-person events like the one they were having at the Gaylord,” she notes. “It was really well done for the virtual audience because we got to see up close the practices that were implemented on site to keep people socially distanced and safe.”

Pricing for Convening Leaders was $295 for both in-person and virtual attendees. All 3,900 event participants have exclusive access to all online sessions—some of which were in-person sessions posted a few days later—for 60 days after the live event.