Dubai Offers the Biggest and Best for Incentives 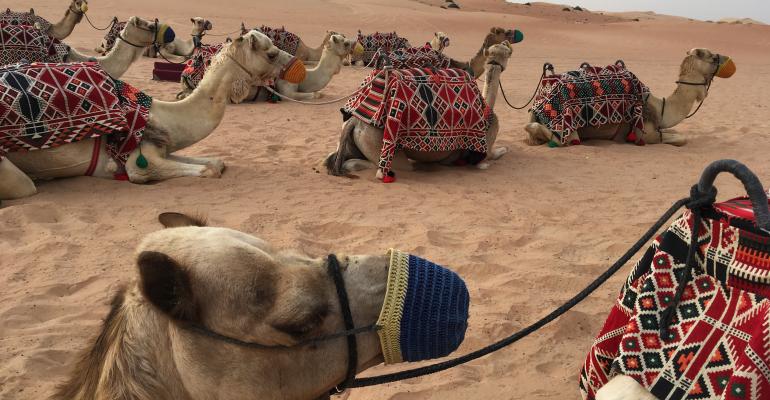 Start Slideshow ›
Visitors are spoiled for places to relax and watch the sunset: the beach, the desert, or the world’s tallest building?

Dubai is famous for the biggest and best, so it is no surprise that it is home to what is generally accepted as the world’s most luxurious hotel, the Burj Al Arab. There are multiple other luxury hotels in the entertainment capital of the United Arab Emirates, including the tallest and second-tallest hotels in the world: the Gevora Hotel and the JW Marriott Marquis Dubai.

For incentive planners, choosing a beachfront property is no problem; when the Emirati run out of beachfront, they build more. The Burj Al Arab is built on its own artificial island so that every guest duplex has an ocean view, and a larger manmade island, the Palm Jumeirah, offers a wide selection of five-star hotels including the Mandarin Oriental Jumeirah, Dubai; W Dubai – The Palm; and the Emerald Palace Kempinski. Two more hotels, Caesars Palace Bluewaters Dubai and Caesars Bluewaters Dubai are under construction on another manmade island that will feature the world’s tallest Ferris wheel. The government introduced an initiative to subsidize more two- and three-star hotels to prepare for an influx of visitors during the Dubai World’s Fair, Expo 2020. The good news for planners is that this scheme is softening prices at high-end lodgings.

Dubai is a place of extremes. Hotels range from the ultra-modern architecture of Zaha Hadid’s ME by Meliá Opus to the old-world glamour of the Queen Elizabeth II liner permanently docked in Dubai and transformed into a floating hotel. There are entertainment venues that would not be out of place in Las Vegas, contemplative desert experiences, and beautiful beaches.  The largest shopping mall in the world is in Dubai and is currently being expanded even though it already features an aquarium full of sharks and more than 200 luxury brands. Not far away are the traditional gold and spice souks which would be the perfect backdrop for a period movie of Ali Baba and the 40 Thieves—except there are no thieves; according to the World Economic Forum, Dubai is the second safest destination in the world.