A Dallas-Area Roadmap for Meeting Pros

The Dallas-Fort Worth area is massive. For reference, the area shown in the map below covers about 3,500 square miles—twice the size of Delaware—and has about 7 million residents.

There are many distinct areas, each with its own personality, to hold a meeting, but you need to know what’s available and what you want. Here’s a rundown of Dallas destinations, from the convenient to the hip.

One tip before I jump in: During rush hour, take the miles that you are driving and triple it, to get a rough idea of how long it will take to reach your destination.

The Airports
Dallas has two major airports, DFW and Love Field. It’s is one of the easiest cities in the U.S. to access and the hub for both American and Southwest Airlines. Their competition usually provides great airfare prices, and most attendees won’t need a connecting flight.

Love is where Southwest flies into and is about 10 minutes from downtown Dallas. There are no meeting hotels near Love Field.

DFW is typically 30 to 45 minutes from downtown Dallas or downtown Fort Worth, but could be longer depending on traffic. The airport itself is one and a half times the size of Manhattan, and is always one of the busiest in the world.  Inside the airport is the beautiful Grand Hyatt, attached to terminal D, and the Hyatt Regency, a shuttle ride from terminal C. These properties are perfect for fly-in groups, but not so great if attendees want easy access to dining and entertainment options. 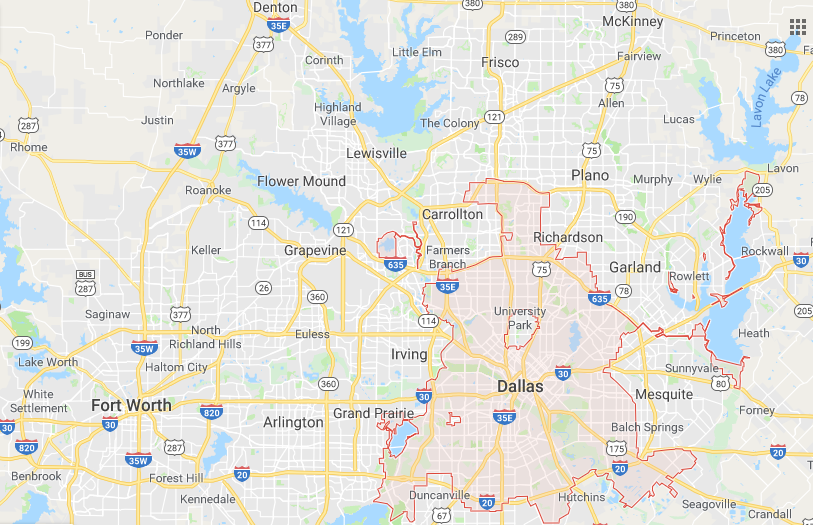 North and South of DFW
On the north side of DFW, the Hilton DFW Lakes Executive Conference Center is a lovely hotel that is perfect for a group of 250 or so. The newly renovated Embassy Suites by Hilton Dallas DFW Airport North is also a great option for groups of 200 to 250. Guests can walk to the massive Grapevine Mills mall and all of the surrounding restaurants. Not far from Grapevine, still on the north side of the airport, is Southlake. The Hilton Southlake is an awesome hotel, that can host up to about 300 people. It is an upscale property that opens out to a nice town square with dozens of restaurants, a movie theater, and more.

Still on the north side of the airport, but not offering airport shuttles, are Great Wolf Lodge and the Gaylord Texan. Neither is walking distance to anything, but both have plenty to keep attendees busy.  The Great Wolf Lodge has nice meeting space for 150 to 200, and gives a lot of value when schools are in session. The Gaylord opened a $120 million tower late last spring, giving it more than 1,800 total rooms. The new tower has a 30,000-square-foot ballroom and a ton of breakout space.

The Irving/Las Colinas area is one of my favorites. Very close to DFW on the south side of the airport, it has a new entertainment district—Toyota Music Factory—with a concert venue and about 20 great restaurants. The Dallas Marriott Las Colinas is right in the middle of this area, and a few blocks away is the Omni Mandalay, my favorite hotel in DFW. It’s warm and hospitable, with an upscale urban resort feel, and great for groups of up to about 400 people. Still on the south side of the airport, a few miles from Las Colinas is the Westin DFW, which is a really nice airport option. The Four Seasons is also nearby and has one of the better golf courses in the area.

Downtown Dallas
Downtown Dallas has a lot of big box hotels, but most aren’t convenient for groups that want easy walking options. Downtown is pretty dead after 6 p.m. unless there is a sporting event or concert. The 1,001-room Omni Dallas is attached to the convention center and is great for self-contained groups. The meeting space is mainly on two floors and has a nice flow to it. The Hyatt Regency Dallas is a couple blocks from the Omni. Its space segments well, allowing it to host two or three mid-size groups without them tripping over one another. The 1,840-room Sheraton Dallas Hotel is the largest hotel downtown, but be careful to map out your meeting. The hotel’s bigger spaces are in a separate building, connected by a walkway. The Sheraton is completing a massive renovation right now, and I look forward to seeing the new product soon. The Fairmont is in the Arts District, an easy walk to all the museums. Parking is valet only, which can be a pain for big events. Some great smaller hotels in cool areas of downtown are the Joule, Statler, and Adolphus.

About three miles north of downtown are the 1,606-room Hilton Anatole and 514-room Renaissance Dallas. With its newly added space, the Renaissance can host about 500 people.

Frisco/North Plano
Probably the hottest area of the Dallas metroplex is Frisco/North Plano, about 30 to 40 minutes from either airport. With all of the corporate relocations to this area over the last few years, it has a completely new vibe and so much going on. The Omni Frisco looks amazing and is in the same area that the Cowboys have a practice facility. If you want a great golf resort, the Westin Stonebriar works perfectly for 200 to 300 people. The Hilton Granite Park spearheads a nice entertainment district just south of Highway 121. The Embassy Suites Frisco has just 330 rooms, but a massive 40,000-square-foot ballroom that works great for rooms-to-space-challenged groups. Many rooms overlook the AA Rangers ballpark, which is a few hundred feet away. I also love the Marriott Legacy, situated steps from Jasper’s (the best restaurant in Dallas), with its great space and excellent service. The brand-new Renaissance Plano is the star attraction of the hottest area in Dallas, Legacy West, which has upscale shops, amazing restaurants, a killer food hall, and more, just steps from the hotel. And the décor of the hotel is stunning. None of the hotels in this area are cheap. They typically charge $220 to $300 most of the year, so if you get a rate lower than that, contract it immediately; this is where your attendees want to be.

Galleria
The Galleria area of Dallas is fairly convenient but has given up much of its former luster to other area destinations. The Westin is attached to the Galleria, but parking is a nightmare. At the Hilton Lincoln Centre, parking is easier, but you have to take a shuttle to the mall. Both are nice meeting properties. A few miles east is the Park Central area, with another Westin and an Embassy Suites. A bit north of the Galleria is Addison, where planners will find the Marriott Quorum, good for 200 or so attendees, and the Renaissance Addison (formerly the InterContinental, formerly the Grand Kempinski). The public space looks nice, but be warned that room renovations are scheduled for later this year. Both properties are technically walking distance to restaurants, but it is a fairly robust walk.

McKinney and Allen
On the eastern edge of the metroplex is another fast-growing area, McKinney and Allen. Marriott is about to open up a new Delta hotel here that will have some great meeting space. There is also a Sheraton in McKinney that works well for a few hundred people. Downtown McKinney has a great feel to it, especially around the historic square. In Allen, there is a ton of limited service hotels with good meeting space for up to 100 people. The downside of this area is the drive to the airport, which can be well over an hour for a good portion of the day.

Denton
On the far north part of the metroplex is Denton, about 45 minutes from DFW, where a stunning new Embassy Suites just opened, the nicest one in the brand. The hotel has 70,000 square feet of meeting space and is located in a new entertainment area with a lot of options within an easy walk. I would consider it for groups with a problematic rooms-to-space ratio. This hotel is simply beautiful.

Arlington
Smack dab in the middle of the metroplex is Arlington. This is where the Rangers (attempt to) play, the Cowboys have a billion-dollar stadium, and where Six Flags and Hurricane Harbor are located. Very convenient from all areas, the Sheraton Arlington is next to the brand-new Esports Stadium Arlington & Expo Center (used to be the convention center). On the other side of Interstate 30 is the Hilton Arlington, which is a good option for 200 or so. There is a nice Doubletree just north of here. Not walking distance to anything, but an easy shuttle ride to everything you’ll need, including DFW airport. There is also a Crowne Plaza that is renovating and will be nice for about 100 people.
A new entertainment complex has opened between the two ballparks called Texas Live, with 8 to 10 huge restaurants and bars. This area can hold about 6,000 people and on game days it’s one of the more lively in the city. A new Loews hotel will open here in 2019 that looks stunning. The new Rangers ballpark will open in 2020 (and likely host its first post-season game in 2045).

Fort Worth
Fort Worth is about the same distance to DFW as downtown Dallas but has a completely different feel. Sundance Square is the beating heart of downtown, with dozens of nice restaurants, bars, and cool shops. The Renaissance Worthington, a newly renovated property, is on the north side of the square; cross the street and you are in the middle of the action. Just a few blocks south is the lovely Omni Fort Worth. This hotel is across from the convention center and has enough self-contained meeting space for groups of up to 500 or so. Just outside the hotel is the Phillip Johnson-designed Water Gardens, a must-visit attraction in Fort Worth. On the other side of the Water Gardens is the Sheraton Fort Worth Downtown, a good option for 200 or so attendees.

Just north of the convention center is the Hilton Fort Worth, the hotel where JFK spent his last night, a great mid-sized hotel. The historic Fort Worth Stockyards, another must-visit site, is three miles north. It’s got some great BBQ places; Billy Bob’s, probably the most famous honky-tonk ever, and a ton of great shopping and restaurants.

Feel free to give me a call about any hotel in the area. As a local, I’m always happy to walk through the city’s options.