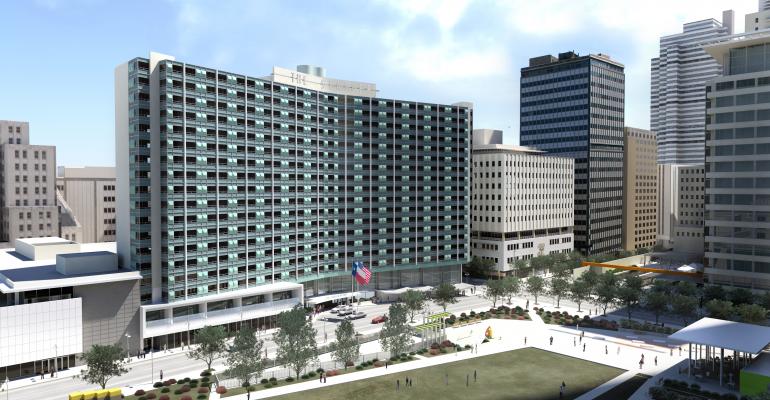 The Statler resumes its role as an events and social center for the city’s downtown.

A new member of Hilton’s Curio Collection opened in mid-October in downtown Dallas. The Statler, originally built in 1956 as part of Conrad Hilton’s convention hotel chain and closed in 2001, has undergone a $255 million redevelopment into a mixed-use complex. The development features 159 newly renovated guest rooms on floors three through seven of the iconic 19-story tower, and includes 219 residential apartments, restaurants, shops, and event venues. The building’s exterior, a Dallas landmark, remains untouched and the lobby retains the original terrazzo floors and marble walls.

The development is home to a 13,154-square-foot ballroom, a former venue for concerts by Tony Bennett, Liberace, and the Jackson 5. The newly renovated space can host up to 1,500 attendees for a reception or 900 for a banquet. A further nine meeting rooms range from 3,741 to 228 square feet with space for up to 468 for a reception. The property also has an outdoor Garden Court bringing the total available meeting space to 33,000 square feet. There are five dining options including Overeasy, a diner; Bourbon & Banter, an underground whiskey library and cocktail lounge; and Fine China, a pan-Asian restaurant. Scout, a 12,000-square-foot social space featuring live music, bowling lanes, ping-pong tables and foosball, will open later this year serving American food and craft beers.

In its heyday, The Statler was known for pioneering features such as music in the elevators and the first helipad in Dallas. Amenities now include a rooftop swimming pool, guest rooms with concierge iPads, wall-mounted Smart HDTVs, and a restored midcentury modern aesthetic.

The hotel was credited with being the cultural heart of downtown Dallas during the 1960s and 1970s, when its ballroom was a music venue for touring bands. One famous guest who contributed to the Statler legend by not spending the night there is Tina Turner; in 1976 she left her abusive husband Ike Turner asleep in a suite at the hotel and escaped down the backstairs.

Tallest Hotel on West Coast Has Stunning Views from Meeting Rooms to the Men’s Room
Oct 31, 2017