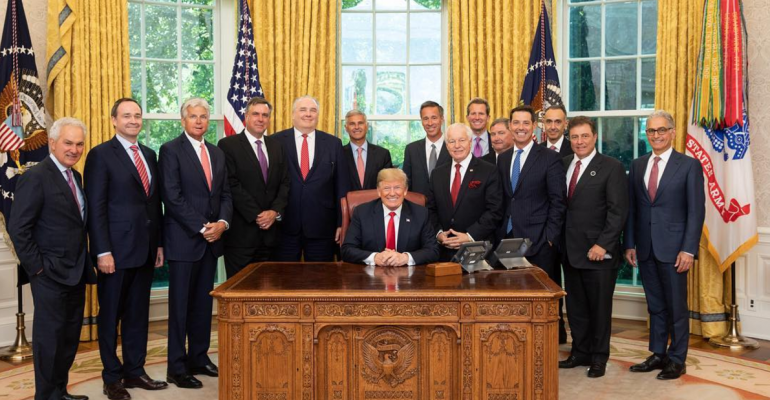 Industry executives emphasized the need for improved visa policies and investment in infrastructure.

The Trump administration welcomed leaders from the travel and hospitality industry to the White House this week to discuss the benefits of international inbound travel to the U.S. economy. Roger Dow, president and CEO of the U.S. Travel Association, and 13 CEOs from the travel and lodging sector, including Marriott International’s Arne Sorenson and Hilton’s Chris Nassetta, also met with the president for the second part of the meeting on September 4.

U.S. Travel Association figures indicate that the travel industry supported 15.6 million American jobs in 2017 and generated $2.4 trillion for the economy. While international travel has increased overall recently, the proportion of travelers to the United States has not, putting in jeopardy the one in nine American jobs that rely on the travel industry. The meeting was aimed at finding ways to expand America’s share of foreign visitors.

According to Dow, "There is a global international travel boom, and there is a huge opportunity to greatly expand upon the already strong economy.” Industry experts at the meeting reportedly asked the administration to support Brand USA, the national destination and marketing agency; invest in transportation and other travel-related infrastructure; and improve visa policies.

"The president is a keen listener whenever you're talking about growing the economy, and he was receptive to the idea that travel growth can be achieved without compromising security,” Dow said.

In the past, travel and hospitality figures have criticized the administration for visa and travel policies. In an open letter to the president, Arne Sorenson urged him to, “keep the welcome mat out for foreign travelers.”

4 comments
Hide comments
RECOMMENDED FOR YOU

Financial Pain Stretches Across the Industry
May 18, 2020