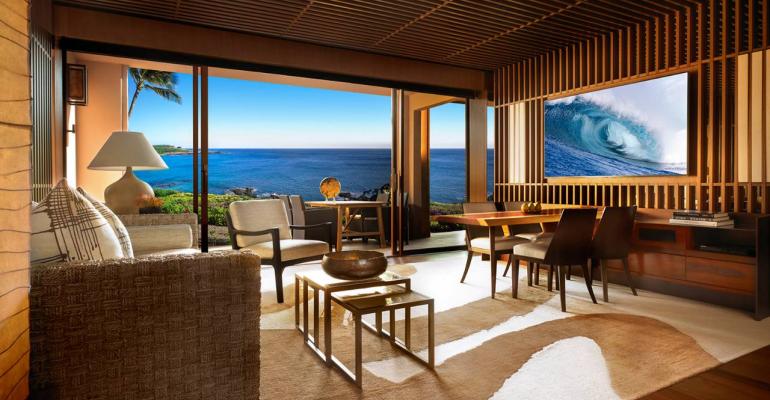 Four Seasons Resort Lanai on Hulopoe Bay overlooking the Pacific Ocean in Hawaii has more to brag about today than its five-star rating and 213 opulent guest rooms—it just topped the U.S. News & World Report’s 2018 Best Hotels in the U.S., followed by The Penisula Chicago; The Langham, Chicago; Twin Farms in Barnard, Vt.; and the top dog’s sister Hawaiian property, Four Seasons Resort Hualalai in Kailua Kona on the Big Island.

The media outlet ranks the hotels based on factors that include their reputation among professional travel experts, guest reviews, and hotel class ratings. While the top five on the U.S. list are impressive, they are far from alone—2,189 other properties also made the U.S. list.

But that’s nothing compared to across the pond, where 21,477 made the Best Hotels in Europe list, led by the Ritz Paris, La Réserve Paris—Hotel and Spa, Rome’s Hotel Eden, Hôtel Plaza Athénée in Paris, and J.K. Place Roma, also in Rome. Closer to home, check out the top hotels in Mexico, Canada, the Caribbean, and Bermuda.

The publication also slices and dices its Best Hotels list in 15 non-geographic ways. The top five U.S. Best Business Hotels, including for meetings and other business group events, include overall best hotel list leaders The Peninsula Chicago and The Langham Chicago; followed by the Mandarin Oriental in Las Vegas; The Jefferson in Washington, D.C.; and The Peninsula Beverly Hills in Beverly Hills, Calif.