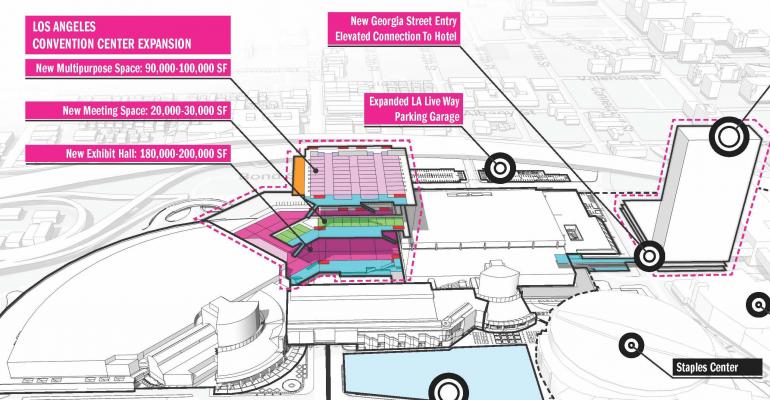 The plan includes an additional 850 hotel rooms adjacent to LACC and the Staples Center.

A plan to expand the facilities at the Los Angeles Convention Center and add up to 850 guest rooms in the neighborhood is getting closer to becoming a reality. Anschutz Entertainment Group has submitted a plan to add 350,000 square feet to the facility, of which 250,000 square feet would be meeting rooms. The expansion would give the Los Angeles Convention Center, located on South Figueroa Street, a total of 1.2 million square feet of conference and exhibition space. The plan, which is projected to cost $500 million, was submitted to the city for approval this month and already has the support of L.A. Mayor Eric Garcetti and City Councilman Curren Price. The convention center is adjacent to the Staples Center, a parking facility, and a J.W. Marriott hotel.  A separate plan was also submitted to undertake a $700-million-dollar expansion to the hotel, which would include a 40-story tower, 850 additional hotel rooms, and a 51,000-square-foot ballroom. The proposal includes pedestrian walkways to connect the buildings in the almost 100-acre meeting and entertainment complex.

The plan, which was first proposed four years ago, LINK http://www.meetingsnet.com/site-news/jw-marriott-la-live-plans-huge-expansion could be completed by 2021.

Financial Pain Stretches Across the Industry
May 18, 2020