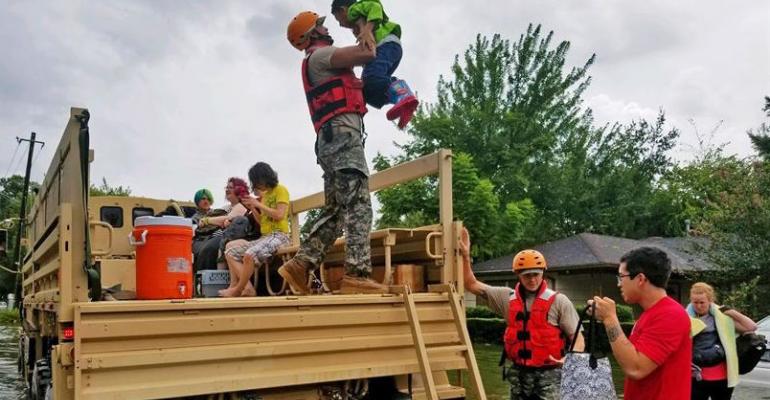 More than 9,000 people displaced by Hurricane Harvey have moved into Houston’s George R. Brown Convention Center, more than the expected capacity of 5,000.  The Red Cross and Texas officials are working on opening another shelter on high ground by early Wednesday morning, while other potential shelters in the Houston area have been abandoned because they are too close to low areas affected by the flooding. The downtown area is dry, for now.

Around 250 miles north of Houston, the Kay Bailey Hutchison Convention Center in Dallas is prepared for evacuees from the storm and released this statement concerning events at the center and how to help. Rocky Vaz, director of the Dallas Office of Emergency Management, told a press conference that the state has asked them to prepare to assist up to 5,000 people. He said, “We are committed to doing whatever it takes to accommodate our fellow Texans who may need assistance.” The shelter will officially open on Tuesday the 29th to welcome any of the Houston-area residents affected by flooding, but a limited number of Galveston-area evacuees will be flown in on Monday.

The American Bank Center, which encompasses the Corpus Christi Convention Center, closed down in anticipation of Hurricane Harvey but escaped the worst of storm without major damage. The main office will reopen on Wednesday with information on upcoming events.

More than 9,600 flights have been cancelled in the region because of the storm so far, around 80 percent of them at Houston’s two airports which are still closed. All major airlines are waiving change fees on flights into the area.  The Federal Aviation Administration has closed the William P. Hobby Airport close to downtown until at least Thursday; an assessment will be made on opening the George Bush Intercontinental Airport this evening.

According to the Houston Convention Center’s calendar, the next conference booked in the space is, ironically, the 33rd International Pump User Symposium of 2017 on September 12-14.  There is no word when the venue, or city, will reopen for business.

The Houston Chronicle has set up a web page to direct help to victims of Hurricane Harvey here.