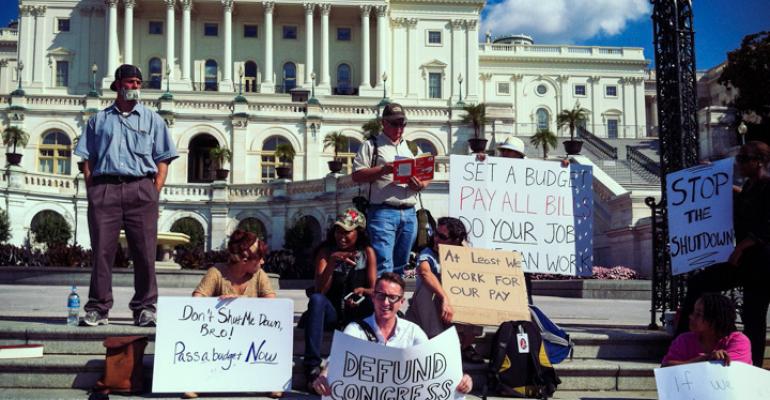 The federal government shutdown, now in its second week, is causing headaches for meetings inside and outside the Beltway. “This is a real issue for us right now,” says Stephanie Yanecek, vice president, marketing and communication service at SmithBucklin, Chicago, who oversees a team of 50 marketing pros who work for more than 70 association clients. Yanecek has been working to mitigate the impact of the shutdown, which she sees affecting association meetings in five major ways.

1. Off-Site Venues Closed.
“For some of our groups, the timing of the shutdown has impacted them in a logistical way,” she says. A couple of groups with meetings in Washington, D.C., had to cancel receptions at federally owned museums because they were closed and then scramble to find alternative venues.

The key is to preserve the experience. “If it was meant to be a networking event at a museum, put them in an environment where networking can happen,” she says. “When [the shutdown] hit last week, a couple of groups had less than 48 hours to shift.”

2. Attendees Are Incommunicado.
“The shutdown truly is a shutdown,” says Yanecek. “We can’t even communicate with attendees [who are government employees] if their primary form of communication is their work e-mail.” That hampers the association’s ability not only to communicate about an upcoming meeting, but to be a resource and support them in their profession. “It’s difficult because we just can’t access some members.”

In this situation, communicating through social media is huge, says Yanecek. Associations want to stay top of mind leading up to a conference, and social media may help fill the void, but not everyone is active on those sites.

3. No Attendance, No Access.
With some of SmithBucklin’s medical meetings, attendees count on networking with government officials from the National Institutes of Health to learn about hot topics, upcoming grant opportunities, and so on. But with the shutdown, attendees at some recent meetings didn’t get what they expected because the NIH wasn’t there. “It’s not that the lack of participation from NIH impacted us from an attendance perspective; it impacted the member experience. It was a let-down because [attendees] are highly dependent on connecting to NIH,” she says.

If the shutdown drags on, Yanecek notes, it’s possible that some individuals won’t attend meetings because the NIH, or some similar federal group, isn’t attending.

It just compounds the problem that associations have faced since sequestration went into effect. Government agencies have reduced budgets and are sending fewer people to meetings.

4. No Speakers.
Government speakers have not only been forced to cancel their appearances during the shutdown, some have canceled engagements in the future. “We’ve already had speakers say, even if the government is up and running again in a few weeks, they have to pull out,” says Yanecek. Once the government reopens, they are going to need to be in the office to play catch-up.

When speakers cancel at the last minute, Yanecek advises planners to fill the gaps in the program by re-running the more popular sessions a second time. Often, people appreciate the chance to attend something they missed earlier in the conference. Also, SmithBucklin, the largest association management company in the U.S., can tap into its network of colleagues and vendors to find last-minute replacements.

5. Cancellations.
Only one SmithBucklin client has canceled an event due to the shutdown—a small meeting focused on legislative strategy planned for Washington, D.C.—but there have certainly been others. “We have some groups that are keeping it on their radar, but most groups are going to try to go forward if they can to minimize the disruptions for those individuals who aren’t directly affected by the fed government shutdown,” adds Yanecek.

Whether it’s a speaker who had to cancel or a reception that had to be relocated, Yanecek says its best to communicate program changes to attendees in advance. Don’t create panic by saying the meeting will be drastically altered, but don’t keep attendees in the dark or they may be disappointed when they arrive on-site. Manage expectations, but note that the changes do not impact the core value of the meeting. Most people realize the association is dealing with an issue beyond its control.

The shutdown may be a short-term event, but when it comes to government-related meetings, disruptions are becoming the new normal, Yanecek says. “There are many ways we are helping our clients think through things so they are not shocked every time something rocks their world.”

Shutdown Has Little to No Impact for Corporate Meetings, Business Travelers—So Far
Oct 01, 2013