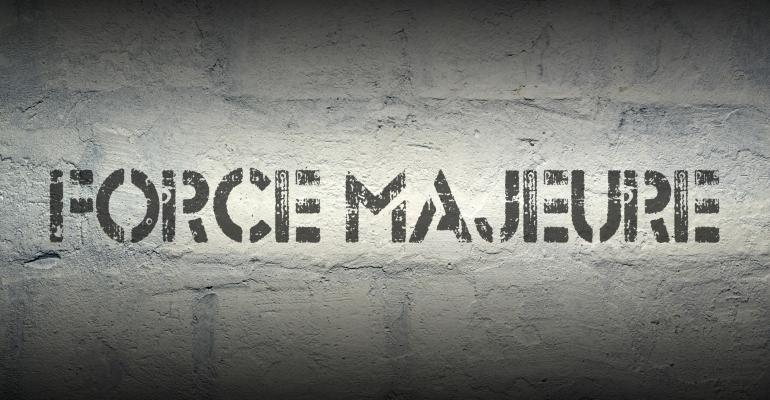 Is Your Meeting Illegal, Impossible, or Impracticable?

When and how you can call on a force majeure clause to cut your losses when the show simply can’t go on.

When is a meeting cancellation not actually a cancellation? When the situation rises to the level of force majeure. This could be anything from a natural disaster to a terrorist attack to civil unrest to a pandemic—anything that eliminates the possibility of holding your meeting over the contracted dates.

And yes, you do need a force majeure clause, says Tyra Hilliard, Esq., PhD, CMP, an industry attorney and department chair for Hospitality, Tourism, & Culinary Arts at College of Coastal Georgia . While some people believe that it’s enough to have a right to force majeure under state-contract laws, most of those rights only apply to legally defined "acts of god," she added. If the situation that arises is an act of man—say, riots near your meeting hotel—those laws would not apply.

Here are four tips to help you develop an effective force majeure clause:

1. You need to specify in your force majeure clause how far out you can terminate the contract without liability should a situation arise in advance that will negatively affect your meeting’s viability. “You need time—a couple of weeks, a couple of months, or even longer—in order to announce the cancellation, refund airline tickets, move the meeting to a new place if you’re going to do that, and so on,” said Hilliard. Of course, this only works if the force majeure event—say a strike by hotel employees—occurs well in advance. Hilliard added, “Even for a force majeure event that occurs just days before the event—the question becomes can you terminate it then (a few days before the meeting) or do you have to wait until it actually makes it impossible, illegal, or impracticable to hold the meeting? In a typical clause, that may not be until the moment the meeting is supposed to begin.”

2. Include the word “impracticable,” along with “illegal” and “impossible.” Impracticable means it doesn’t make business sense to go forward with the meeting, she explained.

3. Consider adding language such as: “Any emergency that prevents at least 25 percent [or another percentage that could be negotiated] of the group’s participants from attending the meeting.”

4. Make the clause reciprocal. That way, if the other party balks, remind them that it applies to their potential situations as well.

Hilliard provided this sample force majeure clause as a jumping-off point toward developing one for your contracts:
“The parties’ performance under this agreement is subject to acts of God, war, government regulation, terrorism, disaster, strikes, civil disorder, curtailment of transportation facilities, any situation beyond the parties’ control that prevents or similar emergency beyond the parties’ control which makes it impossible, illegal, or impracticable to hold or host the meeting, prevents 25 percent of attendees from being able to attend the meeting, or which otherwise materially affects a party’s ability to perform its obligations under this Agreement.

“In the event of a force majeure incident, the group may invoke the force majeure clause and terminate the contract without liability up to ninety (90) days prior to the meeting dates in order to have adequate time to relocate the meeting, if necessary.”

In answer to a question, Hilliard added that that “up to 90 days” means 90 to 0 days,” so it would cover the group at any point in that time frame. One example she provided: Say a hotel’s employees were striking six weeks out and the group wanted to terminate under force majeure in order to move the meeting. The hotel said, “Don’t worry, they won’t be striking when your meeting starts.” The group said, “But what if they are? By then it will be too late to move.” Another example would be volcanic ash cloud similar to the 2010 Iceland eruption that caused the largest shutdown of commercial airspace since World War II.

“Under the wording of most clauses, the ash cloud doesn’t make it illegal, impossible, or impracticable to hold the meeting until flights start getting canceled and people can’t get there,” she said. “By that time, it may be too late to relocate a large meeting.”