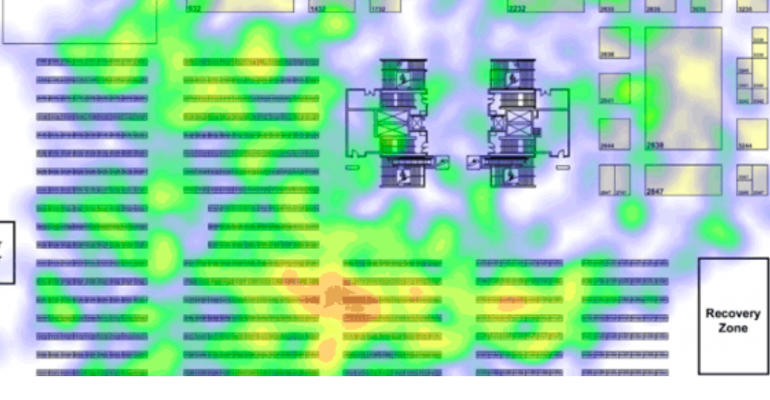 The Search for a Better Traffic Tracker

The organizers of Digestive Disease Week set out on a mission a few years ago to find a technology that would help optimize their trade show floor. DDW, which is a regular on the Healthcare Convention and Exhibitors Associations list of Top 50 medical trade shows, draws around 14,000 attendees and 300 exhibitors to the convention. Because DDW rotates annually between Washington, D.C.; Chicago; and San Diego, Calif., the show floor layout has to adapt to a different venue every year.

The first thing DDW organizers were looking to find was a tech solution that would optimize the poster session area, which accommodates approximately 1,000 posters a day—5,000 over the course of a week. They wanted to know if attendees were finding the poster area in each of their three venues, and how the poster area affected nearby booth traffic.

And they had more general attendee traffic behavior questions as well, says Diedra Crawford, CEM, CMP, DDW’s industry sales and operations director. What insights could they glean from tracking attendee traffic to improve the flow? How does the traffic vary from city to city due to the different floor plans? Is it possible to get real-time information so they can make adjustments on site?

DDW experimented with a few technologies to find one that would give them the answers they wanted, at a price point they could live with:

Radio-Frequency Identification
RFID uses electromagnetic fields to identify and track tags, which in DDW’s case were incorporated into attendee badges. They first used RFID for the 2014 show in Chicago’s McCormick Place, and again in 2015 in Washington, D.C.’s Walter E. Washington Convention Center. The RFID solution did provide good data on the poster area, revealing that most attendees find their way to it, and that it is almost always a busy spot. This was helpful for booth sales because now organizers had data to show exhibitors who didn’t want to be near the posters that this is actually prime real estate, says Crawford.

However, because they had to set up proximity readers in the areas they wanted to track traffic, the RFID solution added freight and labor expenses. The proximity readers each require a power source, which added a hefty electrical expense as well. “It was a little too expensive and labor-intensive for us,” says Crawford. They ran into a few additional drawbacks: Each badge also had to be activated at registration, which added a minute or so to the process for each of those 14,000 attendees. Because the data is linked to each attendee’s personal registration information, it also could raise privacy concerns. And, because they could only set up the readers at the entrances to the hall, they weren’t able to get the more general attendee traffic data they were looking for.

Wi-Fi Tracking
The next option DDW tried for its 2016 show at the San Diego Convention Center used the venue’s routers to track the Media Access Control, or MAC address, of attendees’ Wi-Fi-enabled devices, which are constantly looking for a network. While Crawford says, “Their reports were awesome,” the day’s data would be downloaded from the routers each night, so it was not providing the real-time reports DDW was hoping to get. It also wasn’t able to discriminate between devices belonging to attendees and those carried by venue staff or anyone else in the building, so anyone with a Wi-Fi–enabled device ended up in the data set. And even though it was less expensive than RFID, it still was a little more expensive, and labor-intensive, than they would like.

Other options DDW decided not to try include:
• Counting mats placed on the show floor to track steps. Privacy isn’t an issue since the mats are completely anonymous, but it would have been a strain on staff to place enough mats around the show to gather sufficient data.
• Convention center security cameras. Some convention centers allow show organizers to tap into their existing security camera to track motion. Because it does capture people’s faces, there are some privacy concerns, and because centers usually charge per hour, per camera, it can get pricy, says Meredith Meller, client relationship associate with ATIV Software. Meller gave a presentation at IMEX America 2017 on the various technologies available for attendee tracking.
• Wearable beacons. These are usually wristbands that you hand out to attendees at registration, says Meller. Like RFID, these devices require the show organizer to set up proximity readers in the areas they want to measure, so while the devices themselves aren’t very expensive, it can add up to more than some show budgets can afford. Also, because they are tied to individuals’ personal information, there can be privacy concerns.

App Heat Mapping
For the 2017 show in Chicago, DDW turned to its event app provider, ATIV Software. ATIV had by now developed a heat-mapping feature for its EventPilot app using indoor iBeacon-based navigation that would allow DDW organizers to get traffic insights based on average dwell times, attendee frequency, and estimated unique visitors. Because DDW would only receive aggregate results, not data that’s tied to any individual’s personal information, and attendees can opt in or opt out both when downloading the app and at any time simply by turning off their location services, privacy concerns weren’t an issue, says DDW’s Crawford. And because it is already included in the event app, it brought the expense down 62 percent, she said. The only potential downside—the technology is only available for IOS devices. That wasn’t an issue for DDW’s mostly Apple-device–toting crowd but could be for planners with attendees who lean toward Android products.

DDW had already learned plenty about the poster session location after tracking traffic as it moved to different areas over the previous years: “People are going to go to the posters no matter where they are, so we could leave them in basically the same place in the floor plan for our show in D.C. in 2018, and in San Diego in 2019,” Crawford says. In 2017, key questions for the heat-mapping tool were about attendee behavior and traffic flow.

And organizers learned some things they were able to act on in real time. For example, when traffic flow on the opening morning caused the entrance to be busier than expected, organizers added more security and staffed another entrance. In another instance, they found that attendees kept getting to an activity on the floor via a different aisle than the one the organizers had planned. After watching the traffic flow, they could reconfigure the pathway to the activity to allow people to go down the aisle they naturally wanted to take. “That was one of the most important pieces of information we received because we could change something on site based on behaviors we observed,” says Crawford.

Adds ATIV CEO Silke Fleischer, “You can change the traffic pattern by putting a big banner up so people have to go left or right instead of straight through. You have the ability to change something you see on Day 1 instead of waiting until you read complaints on post-conference evaluations.” If you see there are areas that are not getting much traffic, you can move the coffee cart to that area, or use gamification to draw more people, she said.

One thing DDW organizers found when looking at the data in time increments was that, while the small 10-foot-by-10-foot booths near the exits didn’t get a lot of traffic early on, when most people swarmed the bigger booths, the heat mapping showed people lingering at the smaller booths toward the end of the show hours. That could help organizers sell those smaller booths at a premium, or at least let those exhibitors know not to pack up early, Fleischer says.