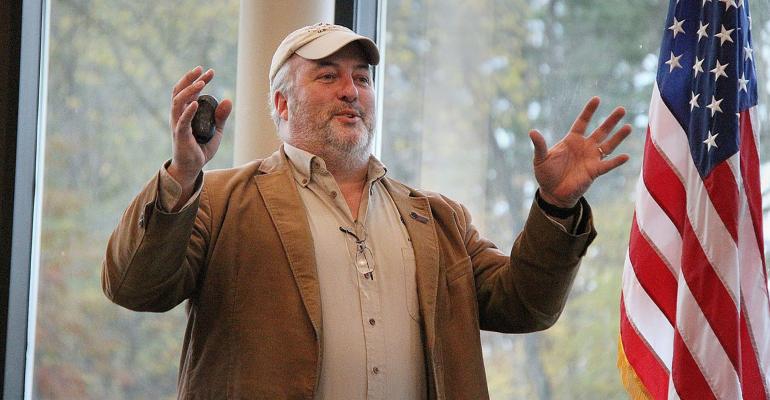 Making the Case Against Phones in the Meeting Room

An instructor at the University of Michigan warns his students about "continuous partial attention," and his ideas make sense for your attendees, too.

Dr. Eric Fretz uses a variety of presentation techniques to keep students engaged and off their cell phones. He’s a big fan of props (once having a drone fly through his lecture hall) and he’s been known to deliver his lectures in head-to-toe costume. But his top strategy has nothing to do with theatrics: “I simply appeal to their common sense,” says Fretz, who holds doctorates in both education and psychology. He begins each new course by sharing with his students the most recent studies about how technology can interfere with learning. “I tell them how much more poorly they’ll do in the class if they’re multitasking, which I refer to as ‘continuous partial attention,’” he says.

Indeed, there’s plenty of research to substantiate his claim. One article in the Journal of the Association for Consumer Research reveals that the mere presence of a cell phone, even if stowed in a bag or briefcase, contributes to a lack of focus and hampers problem-solving tasks. The only solution to the problem, the research concludes, is disconnecting from your phone for a set period of time.

Fretz also advises students against bringing laptops to class to take notes. One recent experiment by education researchers Pam Mueller and Daniel Oppenheimer revealed that people recall lectures better when notes are written by hand rather than typed on a laptop. As part of the experiment, students watched a video of either a lecture or TED Talk and took notes either longhand or on a laptop. After, they were asked to complete difficult mental tasks for 30 minutes and then take a quiz on the video content. The result: Those who put pen to paper vastly outperformed the laptop notetakers. The researchers observed that students who typed their notes were more focused on transcribing the lectures than processing them. Not only that, the study concluded that laptop use in class was distracting to other students.

Armed with this information, Fretz says he attempts to convince students that “they’ll learn a lot better if they give me their full attention.”

But Fretz stops short of banning laptops and cell phones. Instead, he requires those who aren’t convinced by the research to sit in the back of the classroom. “I ask them to be classy in their misuse of technology by separating themselves from those who want to stay focused,” he says. Not surprisingly, most students take his advice and come to class without their smartphones or laptops.

Fretz believes that his tactics could work in corporate learning sessions as well. “If you make a strong case for the value of being unplugged, people are more likely to buy into it,” he says.

Next up: Rachel Kremen, Rutgers University, who uses "teach backs" to keep students off their devices