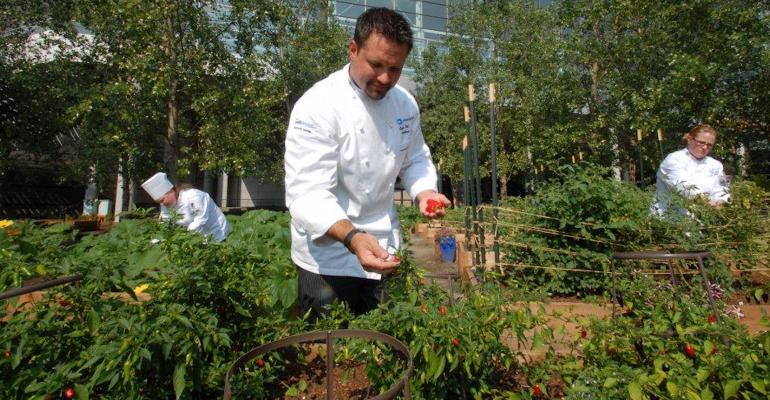 Some convention centers are growing their own ingredients, adding appeal to their meals.

When Blue Bear Farm debuted in 2012 at Denver’s Colorado Convention Center, it was certainly a novelty: one of the first vegetable, herb, and honey-producing gardens located on convention center grounds. The creators didn’t envision it becoming, as it has, a popular event space, let alone a harbinger of much bigger food-producing venues at convention centers.

Blue Bear Farm is a 5,000-square-foot area just outside the convention center’s main kitchen. Raised beds in the garden grow a variety of vegetables and herbs and two beehives produce honey—all used in dishes and drinks produced at the center. “It wasn’t until 2014, when we brought a bunch of meeting planners to see the farm, that it morphed into an event space as well,” recalls Laurence Rua, senior vice president, Centerplate, which manages food and beverage operations at the Colorado Convention Center and dozens of other North American convention facilities. “The planners thought it would be a great space for hosting small groups, and so we put in lights and tables and it just took off from there.”

Indeed, convention centers of all kinds are morphing into something quite different from urban big boxes serving unremarkable food to thousands of people daily. The Jacob K. Javits Convention Center, for example, is building an extension whose roof will support the largest farm in Manhattan, with produce from the nearly one-acre area to be used predominantly by the center. The Los Angeles Convention Center last year unveiled its 9,500-square-foot rooftop garden farm, featuring citrus trees, herbs, vegetables, and seasonal flowers. In Ohio, the Columbus Convention Center recently debuted SmartFarm, the only indoor vertical hydroponic garden within a convention center. According to the center, the facility produces 2.5 tons of vegetables and herbs annually for culinary use at the center and in charitable donations.

Convention centers’ rooftops are also turning into one-of-a-kind event spaces. Upon completion of the San Diego Convention Center’s phase-three expansion, attendees and locals will be able to enjoy festivals, community events, public art, relaxing gardens and spectacular views in a five-acre rooftop park overlooking the waterfront—the largest park in the downtown area. The Colorado Convention Center’s expansion plans include a 250,000-square-foot rooftop addition that will feature an 80,000-square-foot ballroom opening onto a large outdoor terrace with views of the Rocky Mountains.

What exactly is going on here? Convention centers are expanding sustainability efforts to include hyper-local sourcing from their own farms and gardens, but that is only part of the story, Rua explains. “The farm-to-table movement is very powerful and people want to experience it at events,” he says. “It’s also about creating a sense of place through local food, drink, and environment—that’s something very appealing to meeting planners because that’s what their attendees are looking for.”

And because the appealing food and beverage, dramatic spaces, and local experience are a draw for attendees, these elements are now top of mind in the planning process. “Meeting planners want to keep attendees in the building,” says Centerplate’s Corporate Executive Chef Carmen Callo. “That’s what having great food and beverage at a convention center can do.”