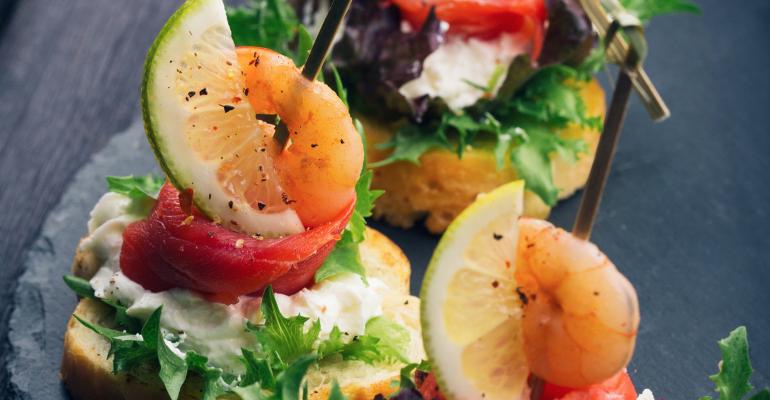 Food and beverage at events continues to evolve toward healthier options, with an intense focus on veggie-centric dishes, local and regional specialties, and interactive dining formats.

The food revolution that has transformed American taste buds over the past several years has brought more pressure than ever for event organizers to deliver healthy, local food creatively presented—all while respecting a growing array of dietary restrictions and sustainability practices.

“Consumers are more educated and demanding about healthy, sustainable food choices, and they’re going to look for those choices at events,” says Laurence Rua, senior vice president, Centerplate, which manages food and beverage operations for more than 30 convention centers in North America. One result of new consumer tastes is that “eighty percent of my chefs are doing custom menus at convention centers,” he adds.

Michele Polci, CMP, Caesars Entertainment’s director of citywide catering sales, Las Vegas, agrees that a big challenge is creating customized culinary experiences. For instance, “The reinvention of comfort food continues to be in strong demand; modifying it to match dietary demands can be challenging. We are using vegetables and beans more than ever before.”

Here’s a more granular look at hot culinary trends this year when it comes to specific foods, ingredients, beverages, and presentations.

Some trends come and go, but the plant-based food movement appears to be here to stay for the foreseeable future. Sales of plant-based food in the U.S. grew 8 percent last year compared to 2017, topping $3 billion, according to Nielsen research. The National Restaurant Association’s “What’s Hot Culinary Forecast 2019” calls out veggie-centric dishes among its top 10 trends, with plant-based sausages, burgers, and other proteins among the hottest items on menus these days. In fact, a vegan burger won multiple awards at the 2019 CES tech expo.

Meat alternatives will continue to gain in popularity this year, confirms Kimpton Hotels & Restaurants’ “2019 Culinary + Cocktail Trend Forecast.” Eighty percent of the company’s chefs plan to feature a vegan or raw dish on their menu, whether it’s a savory choice like spaghetti and beet balls or a dessert like cashew date cheesecake. Chefs are also experimenting with dishes consisting of whole vegetables, such as roasted eggplant and vegetable “charcuterie” served family style.

Other veggie-forward trends: Creative chefs are preparing vegetables using smoking and curing—techniques previously reserved for meats and fish. Veggies are replacing carbs, thanks to options like cauliflower gnocchi and pizza crusts made from chickpeas and polenta. Plant-based crunchy snacks, such as roasted lentils, chickpeas and chips, are also on the rise. One veggie that has seen its heyday come and go: kale. Look instead for wild greens such as sorrel, dandelion greens, and amaranth.

Meat consumption is declining but it’s definitely not disappearing. New cuts of meat showing up on menus include shoulder tender, oyster steak, Vegas strip steak, and merlot cut, according to the NRA’s 2019 forecast. Heritage-breed meat and locally sourced meat and seafood are other top trends in the report.

Kimpton forecasts more “experimentation” with meat dishes, including offal-based dishes such as monkfish liver mousse or offal and sausage arancini. The hospitality company Benchmark goes further, predicting in its “Top 10 Dining Trends for 2019” the arrival of insect protein in foods and drinks in the U.S. market. “In fact, 80 percent of the world consumes insects—low in fat and three-to-four times as much protein as beef,” says the report. “Insect powders can enhance your cocktails and cricket flour can be used to make breads and pastries. Their products will soon flood the shelves of grocery stores and restaurants alike.”

Kimpton bartenders point to new flavors like rose, tarragon, and celery root in cocktails, as well as more savory and vegetable-inspired alcoholic drinks. Flavored alcoholic seltzers are also hot, served with a seasonal fruit puree, herbal garnish, or a splash of citrus. Meanwhile, 80 percent of Kimpton bartenders will be featuring more non-alcoholic cocktails on their menus in 2019. “Virgin cocktails are more inspired and complex than ever before thanks to new non-alcoholic spirits like Seedlip, house-made syrups and tonics, and the use of fermented ingredients,” according to Kimpton’s report.

Locally produced craft beers, wines, and spirits are among NRA’s top trends for the year. Centerplate’s Rua sees the same trend. “Years ago, it was about brand loyalty. People stuck to a certain type of branded drink, like Bacardi or Beefeater. Now it’s about local distilleries, beers, wines, and the whole mixology revolution.” Signature cocktails for group events remain extremely popular. “People love having a special cocktail with a fun name,” he says. “It makes for great conversation and social media posts.”

Static buffet presentations with rows of chafing dishes are fast disappearing when it comes to event catering. Planners are looking for “interactive, networking-friendly formats,” notes Rua. These can range from family-style servings set on a rotating wheel on each table to food stations where attendees can compose their own taco, ice cream sundae, or sushi roll, for example.

Polci finds that “event flow and decor increasingly is being built around food.” Handheld items are still key to a great networking event, and she’s a big fan of the “reimagined” sandwich, such as fried chicken breast with maple butter sandwiched between pecan waffles, or turkey meatballs with pomodoro sauce served in a garlic pretzel roll. “With the sandwich concept, we are able to be creative with our flavors, using a variety of hummus or yogurt-based spreads and infused aioli.”

Benchmark calls it “Farm to Table 2.0.” More restaurants are bringing farmers right to the table, involving them in menu creation, and even asking them to plant specific crops or source chicken and other meat just for their menus. Further, an increasing number of restaurants, convention centers, and hotels are growing some of their own food and herbs. One example: The Orlando World Center Marriott in Florida recently debuted a modular hydroponic vegetable production system called the HyCube. Located next to the hotel’s main kitchen, the HyCube produces lettuce, spinach, arugula, herbs, microgreens and edible flowers for the nine dining outlets at the hotel.

Everybody’s talking about gut health these days, and big brands have jumped in with a plethora of probiotic products, from yogurts and ice creams to candy bars and fermented drinks like kombucha. The global market for probiotic ingredients will exceed $64 billion by 2023, up from $36 billion in 2017, according to Global Market Insights Inc. Chefs are responding by serving up fermented foods like kimchi, tepache, pickles, miso, sauerkraut, and tempeh, according to both the Kimpton and Benchmark forecasts.

Kimpton chefs are seeing “a new obsession with superfoods that pack a strong nutritional punch.” These include spices like turmeric, sage, and holy basil, and “natural elixirs” like rose water, goji berries, and camu camu, a Brazilian fruit known for its antioxidant properties.

Reducing Your Food Footprint: You've Got to Start Somewhere
Nov 05, 2021