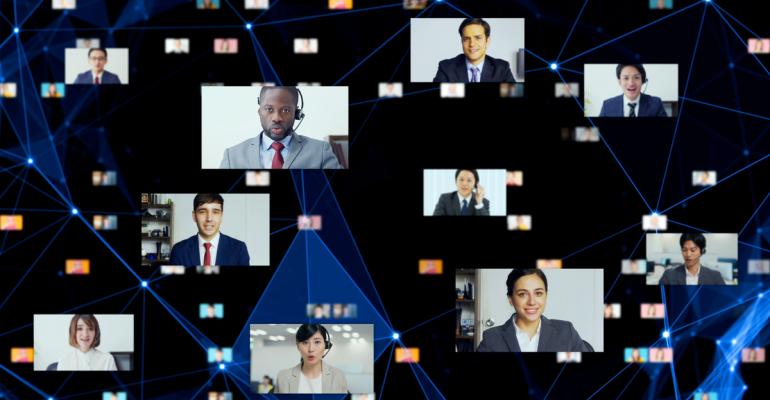 Virtual platforms are improving their networking tools and their ability to connect with key business apps. Here’s the latest in the online-meeting scene from Digitell, Airmeet, Hopin, Meetplay, Projection, and others.

News on the virtual meeting front continues to stream in, with new features and integrations announced almost daily. Since last year, when the pandemic sent meeting professionals racing to get their events online, the lament has often been that no technology platform gets everything right. That may be changing. Based on the pace of development, it’s important to keep an eye on the market, shop around, and ask questions. If you can think of a tool to make your online meetings better, it’s probably in the pipeline.

• Shindig has added a virtual lobby for networking to its virtual-events platform. The space, which can be used by in-person and online attendees of a hybrid meeting, allows participants to see who is talking to whom and who is free for conversation. Conversations can merge, and individuals can move from conversation to conversation.

• Audiovisual company Projection has developed a hybrid meeting-content management tool called ProjectionNet. The system provides, among other features, a central platform for physical and virtual presenters to upload and review presentations; a process for booking technical support and recording appointments; and integration with abstract management systems and virtual platforms.

• Digitell has released a new networking feature on its OPUS DX virtual-event platform aimed at better connecting audiences both online and in person. The two audiences use the same event page to view the agenda, build itineraries, access handouts, and complete evaluations—and now the interface includes the Attendee Connect tool, which allows participants to add background information and connect with others through one-on-one video or text chat. Attendees can also create a list of colleagues that they have connected with during the event.

• To allow for end-to-end event management, virtual event platform Airmeet has announced integrations with key customer-relationship apps, including Marketo, Salesforce, Hubspot, and Mailchimp. The platform also connects with registration provider Eventbrite, Interprefy for remote simultaneous interpretation, and Zapier, which can facilitate integrations with other web applications.

• London-based virtual event platform Hopin, which made news by acquiring event marketing platform Attendify ths summer as well as closing a deal in March that raised $400 million in funding, is going strong with an early August announcement of another $450 million investment. The valuation for the two-year-old company is now $7.75 billion.

• BlueJeans Events has rolled out several enhancements to its virtual-events platform: Now event hosts can customize a livestream player with individual BlueJeans Events widgets for chat, Q&A, and polling; closed-captioning is fully supported and free; speakers, emcees, and event managers have an “back-of-the-house” group chat box; and hosts can upload an audio playlist of pre- and post-event music. The platform also now integrates with MootUp, for events in 3D virtual spaces.

• Meetingplay has launched a “Go Live” tool that allows live video to be broadcast through an event’s mobile app. Whether a meeting host is streaming an event’s presenters or an exhibitor is speaking to the audience from their booth, the tool is meant to better connect virtual attendees with the on-site experience during a hybrid event.