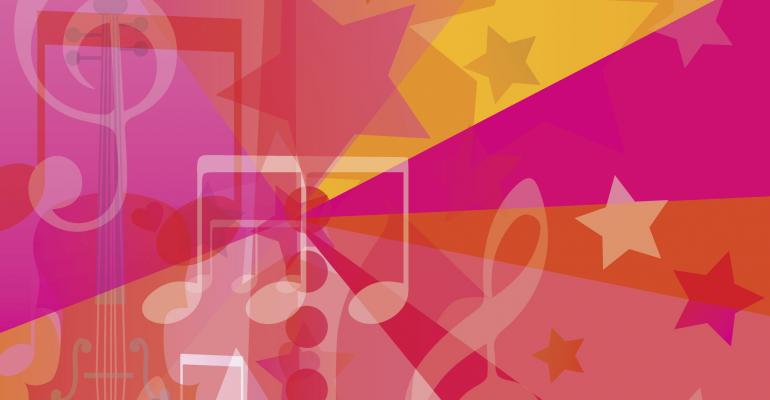 Everything planners need to know about their music licensing responsibilities.

Whether you play short song clips to build excitement as speakers come to the stage or crank up the tunes for a final-night party, you need a license to play music at your meetings and events. Andy Sharpe, CEO at Song Division, answered questions about the why, how, and how much for music licensing on a 30-minute MeetingsNet webinar. Here is some of the must-know information that came out of the event.

There are a few limited exceptions:
• Face-to-face educational sessions for a non-profit educational institution don’t need a music license. However, if that non-profit plays music at the event outside of the education, for example as background during a networking reception, it would need a license.
• A charitable event doesn’t need a music license if nobody—including the organizers, performers, and promoters—is being paid.

Can the band hold a music license to cover the songs it plays?
No, the event owner must get the license. The fee you pay the band is for the musicians to play their instruments and entertain. The actual songs still need to be paid for with a music license.

What if the planner only plays music he or she already owns?
When people buy a CD, or pay for a streaming service like Spotify or Apple Music, they are paying for private use of the music. Once it’s played beyond family and friends, it’s a public performance and requires a music license.

How do I get a music license?
There are three performing rights organizations, or PROs, in the U.S.: BMI, SESAC, and ASCAP. They don’t have reciprocal arrangements, so if your DJ or band plays a wide array of music, you need a license from all three. (It would be possible to pick songs from the catalog of just BMI, for example, allowing you to only get one license, but it’s not an especially practical solution. The PROs are not genre specific, for example<,> Eminem and Dolly Parton are signed with BMI; ASCAP represents Beyoncé and Duke Ellington; and Neil Diamond and Bob Dylan work with SESAC.) The licensing process at each PRO is relatively easy, Sharpe says. “In a nutshell, you’re going to get in touch with the organization, tell them what events you have, they’ll ask a few questions, issue you a license, and you repeat it annually.”

What’s it going to cost?
The rates vary slightly among PROs and depend on the size of your events. However, Sharpe points out that for most organizations, they’re affordable. For $388, he says, you can be covered by all three U.S. PROs for an event of up to 1,500 people.

For more on music licensing, listen to Sharpe’s MeetingsNet webinar on demand, or visit the music licensing information page on the SongDivision website.