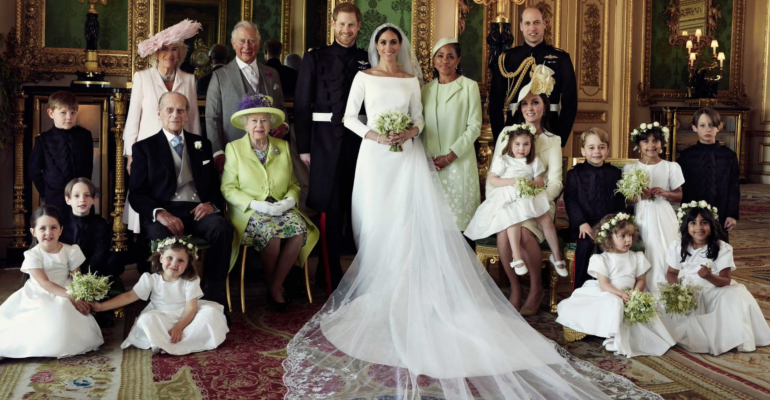 And you thought your meeting was steeped in immovable tradition—the British royal couple’s wedding this weekend shows you can honor tradition and still give it a modern twist.

I am not one of the anglophile U.S. citizens who got up before dawn on Saturday to watch Harry and Meghan transform via marriage vows from British prince and U.S. actress to the Duke and Duchess of Sussex. But I also don’t live under a rock—that wedding got more media saturation than the U.S. president’s latest tweets. Of course, more than 22 million of us were watching—you couldn’t miss it if you tried.

So I couldn’t help but notice that, besides giving us a much-needed reason to celebrate, the royal wedding v.2018 offered some ideas that could prove inspirational for your next meeting. A few that spring to mind:

The bridesmaids and pageboys: Instead of relatives, best friends, or contemporaries who must be included to keep the family peace, as is common in the U.S., the bride had a gaggle of adorable kids as her seconds. Even when Fed-Up Flo (three-year-old Florence van Cutsem) followed in her cousin’s Grumpy Grace footsteps at William and Kate’s wedding by looking less than pleased to be a bridesmaid, she and the other wee ones helped make a rarified royal event more relatable to the rest of us.
Planner takeaway: Don’t be afraid of what you can’t control! This also could be said for of the other things that kept shifting pre-wedding, such as whether Markle’s father would make the scene. Planners are experts at this, but it never hurts to remind yourself that being able to roll with the punches is essential.

Also, getting back to the kids, how are you including your next generations in your variety of pomp and circumstance? And perhaps, unless you’re a royal couple, beware of working with animals and small children—they invariably will upstage you.

Hats and fascinators and hatinators (yes, apparently the latter is an actual thing, sort of a hat/fascinator hybrid): The Kentucky Derby just warmed us up for the glorious day of headpieces that was the royal wedding (check out this gallery from Harper’s Bazaar). For some watchers, the hats were the best part of the whole show, much like the ads are for non-football fans watching the Super Bowl.
Planner takeaway: Is there some article of clothing or some other symbolic item that could become a “thing” at your event, something you could hold a “best of show” contest around, or gather photos of and post in a gallery after the fact?

I want to have cocktails with #CordAndTish after watching all of their #RoyalWedding coverage Saturday morning >>>> [VIDEO] https://t.co/dcCKlWRNdf

The weather plan B: While the wedding itself was of course indoors in the glorious St. George’s Chapel, the open-topped Ascot Landau carriage from the Royal Mews they took to greet their well-wishers post-nuptials would have dampened more than their spirits if it had rained, which fortunately it did not. But if it had, they had a backup enclosed coach waiting in the wings.
Planner takeaway: Have contingencies in place for everything, but especially for anything that could be affected by Mother Nature. She is nothing if not capricious.

The F&B: The wedding cake managed to break from and keep with tradition simultaneously—no mean feat! The tier-less cake was divided in three, with each piece sitting on a golden throne. Created especially for the bride and groom, the delicious-sounding lemon sponge cake was decorated with Swiss meringue buttercream and flowers, filled with Amalfi lemon curd and elderflower buttercream, and drizzled with an elderflower syrup created especially for Harry and Meghan.
Planner takeaway: OK, so the chef probably won’t go to those lengths to make your gala’s dessert a showstopper, but have the conversation to find out what they can do to make your event’s food and beverage something to Instagram about. Also, while traditions are important, don’t be afraid to break out of the chicken or surf-and-turf rut—and don’t forget about the special dietary needs and preferences your attendees have, from religious restrictions to adherence to gluten-free or vegan diets.

The speaker: Reverend Michael Curry’s wedding sermon was a bit of a departure from the usual royal wedding message, from what I’ve been reading (listen to his full sermon here). According to the Washington Post, “Curry was fiery, enthusiastic, passionate. He spoke in the style of black American preachers. He quoted Martin Luther King Jr.

“’We must discover the power of love, the power, the redemptive power of love,’ he said, quoting King. ‘And when we do that, we will make of this whole world a new world. But love, love is the only way.’”

While tweeted reactions to his sermon ranged from thinking it was wonderful to saying it was perhaps a bit much for the occasion, it was nothing if not unforgettable. The nontraditional (for British royal weddings, anyway) touches continued with The Kingdom Choir, a Christian gospel group, which sang a heartfelt rendition of “Stand by Me.”
Planner takeaway: As your constituency evolves, your speakers and entertainment need to evolve along with it. Does your lineup reflect your current audience physically, emotionally, intellectually, and perhaps even spiritually? Are you willing to take a chance on a speaker who might be unconventional, but definitely would be unforgettable?

Beautiful tribute to the late Ray Wilkins by both clubs. #FACupFinal2018 pic.twitter.com/Wsv2MardVv

The scheduling conflict: Could it be that the brother of the groom, the best man, might have an urgent engagement elsewhere on the big day? In fact, as president of England’s Football Association, Prince William was supposed to hand out the trophy to the FA Cup victor that day (I hear this is akin in importance to the Super Bowl here in the U.S.—a very big deal. Congratulations to Chelsea, which beat Manchester United for the title). Despite some rumors that Wills might cut out early to fulfill both roles, the honor instead went to the widow of Ray Wilkins, who played for both clubs over his career.
Planner takeaway: Always triple-check the schedules of your event speakers and other VIPs, with one of those checks being close to your dates just in case anything has changed. And on the FA Cup side, again, have that plan B fully baked and ready to serve. From all accounts, it sounds like this was a very apt solution to the scheduling conflict.

Gorgeous #royalwedding #flowers were delivered to the hospice today. What a special treat. They look and smell totally stunning. Thank you @PhilippaFlowers and cheers to the newlyweds pic.twitter.com/8Ypzm472ot

Charitable tie-ins: Both bride and groom are very involved in charities and giving back, so why should their special day be any different? The peonies, foxgloves, and white garden roses from the church and reception were made into bouquets for hospice patients. MeetingsNet and CBI had something similar at the Pharma Forum this year: Hilton teamed up with Repeat Roses to give participants the opportunity to make arrangements of flowers Repeat Roses had collected from events such as weddings, which then were donated to a local rehab hospital. The royal couple also asked for donations to charity in lieu of wedding gifts.
Planner takeaway: How can you reuse and repurpose items you no longer need once the event is over, from leftover food to floral arrangements to banners, bags, and badges? There is a lot that is being thrown away that could not just be reused, but also make someone’s day.

The cars of the #RoyalWedding From electric #Jaguar E-types, classic #RollsRoyce gems and armoured Range Rovers. Which was your favourite?https://t.co/cCQDIrDJpe pic.twitter.com/dcaMSLYI31

The getaway car: The couple honored the royal family’s long history with Jaguar-Range Rover by leaving the festivities in a 1968 classic silver Jaguar E-Type Concept Zero car. But since bride and groom, and the royal family as a whole, are into championing green initiatives these days, that gorgeous Jag had first been eco-converted, from its LED headlights to its fully electric powertrain.
Planner takeaway: Which of your meeting traditions can you turbo-charge with a different kind of juice?

What did you take away from the royal wedding?