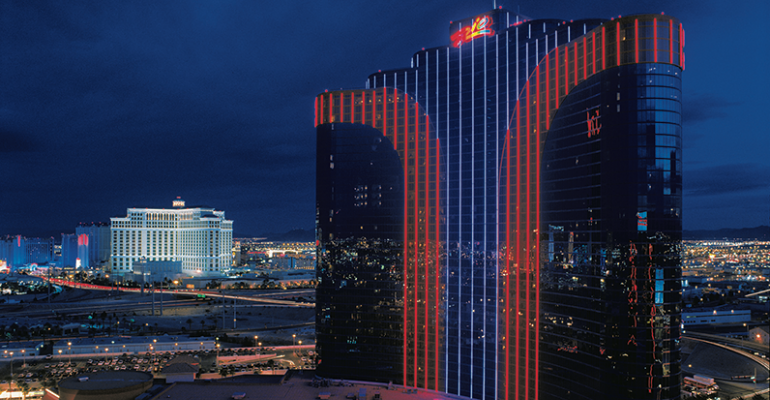 Caesars Entertainment and MGM International are reportedly reducing the number of hotel-casinos in their portfolios.

Prime Las Vegas real estate is changing hands. Caesars Entertainment Corp. has announced that it will sell its Rio All-Suite Hotel and Casino to a New York-based real estate investment company controlled by Imperial Companies for $516.3 million. The move comes on the heels of Caesars’ acquisition by El Dorado resorts.

According to The Las Vegas Sun, Rio, which is just under a mile from The Strip to the west of Interstate 15, will be leased and operated by Caesars for the next two years, with an option for a third year. During the lease period the 2,522-room, 160,000-square-feet of meeting space property will remain part of Caesars Rewards network.

In a statement, Caesars Entertainment CEO Tony Rodio said, "This deal allows Caesars Entertainment to focus our resources on strengthening our attractive portfolio of recently renovated Strip properties.” This includes the new Caesars Forum conference center which will open in early 2020.

Further, MGM Resorts International appears on the verge of announcing a sale of Circus Circus to hotelier Phil Ruffin, who previously bought Treasure Island (now TI) from the resort chain and is also a part-owner of the Trump International Hotel in Las Vegas. Circus Circus is strategically positioned on a 60-acre piece of land near the Las Vegas convention center which includes the Las Vegas Festival Grounds. The 3,767-room property also has about 20,000 square feet of meeting space, as well as the Adventuredome, an indoor theme park.