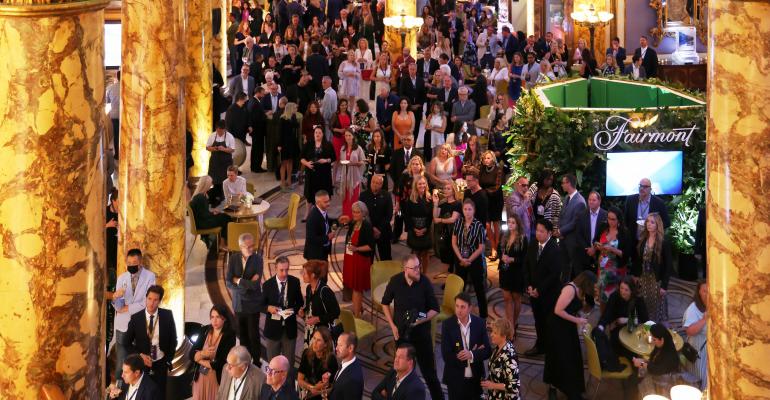 The opening reception for Accor's Global Meeting Exchange was held in the opulent lobby of the Fairmont San Francisco.
Destination & Venue News

A lively three days at the Fairmont San Francisco brought together planners, hotel execs, and hotel reps for education and a dose of wellness.

After a two-year postponement as a result of the Covid pandemic, the 10th edition of Accor’s Global Meeting Exchange took place July 18 to 21, bringing together top clients, company leadership, hotel representatives, and various partner companies for networking, education, and a chance to experience the historic Fairmont San Francisco.

For Accor, it was an opportunity to outline a major reorganization of the global hotel company that goes into effect October 1st and to highlight its commitment to sustainability and focus on wellness. Also prominent on the agenda was news of meeting and incentive properties in the pipeline.

Patrick Mendes, group chief commercial officer, laid out for the 300 attendees how the hotel giant is realigning internally. After growing from 12 brands eight years ago to 42 brands today, the company is now splitting into two major divisions, Power Brands and Luxury/Lifestyle.

The Power Brands division will encompass economy, midscale, and premium hotels such as Novotel, Pullman, Swissotel, Ibis, and Movenpick and will be overseen regionally (Americas, Europe, and MEAPAC). On the other hand, the Luxury/Lifestyle division will be brand-led with a CEO for each of four pillars: Raffles and Orient Express; Fairmont; Sofitel, MGallery (boutique collection) and Emblems (a new luxury collection launching later this year); and Ennismore. The lifestyle-focused Ennismore comprises brands such as 21c Museum Hotels, SLS, The Hoxton, Gleneagles, Hyde, JO&JOE, and Morgans Originals.

At this point, the changes don’t affect group sales, according to Markus Keller, chief sales and distribution officer, who noted that the reorganization allows brands to focus on their priorities. “The fundamentals of running the luxury brands are quite different,” he says, noting that “the depth of experience, programming, and product” expected from a luxury/lifestyle hotel. “Without taking anything away from the Power Brands, they should be driven much more by consistency, simplicity, and automation than is expected at luxury/lifestyle brands.”

Top Trends: Wellness and Sustainability
In his opening remarks to the GME audience, Keller noted three lasting impacts to travel and tourism, and the meetings industry in particular, that have resulted from world events of the past few years: an increased focus on CSR “and our responsibilities not only to the environment, but also our social responsibilities in terms of gender and racial equality”; the acceleration of technology; and “probably more importantly” a change in priorities among the workforce. It seems that “we all took an opportunity to look at ourselves and what we want out of this life and the time we have on the planet,” Keller said. “People want to 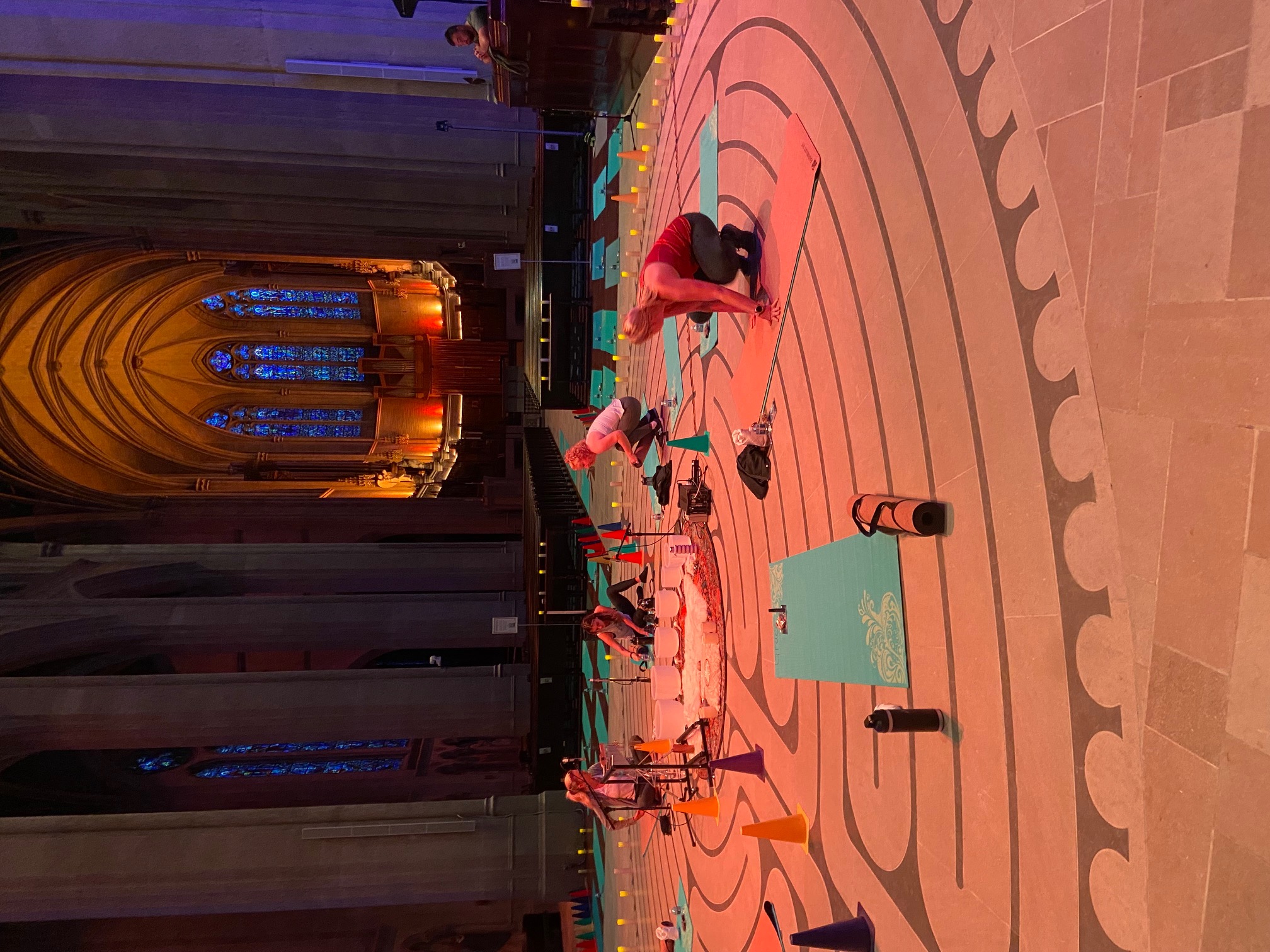 work from home and be able to travel more slowly, and not feel constantly [rushed]. Hence, you have a lot of people focused on authenticity and getting back to local, and wanting to co-work or work at home.”

With these changing workforce priorities and expectations in mind, Accor designed its client event to showcase various ways that planners can put wellness front and center on a meeting agenda:
• Morning exercise options included yoga sessions specifically for the group in the spectacular Grace Cathedral (right) plus guided walks.
• Keynote speaker Leigh Weinraub spoke inspiringly on the tools for mental and emotional fitness. 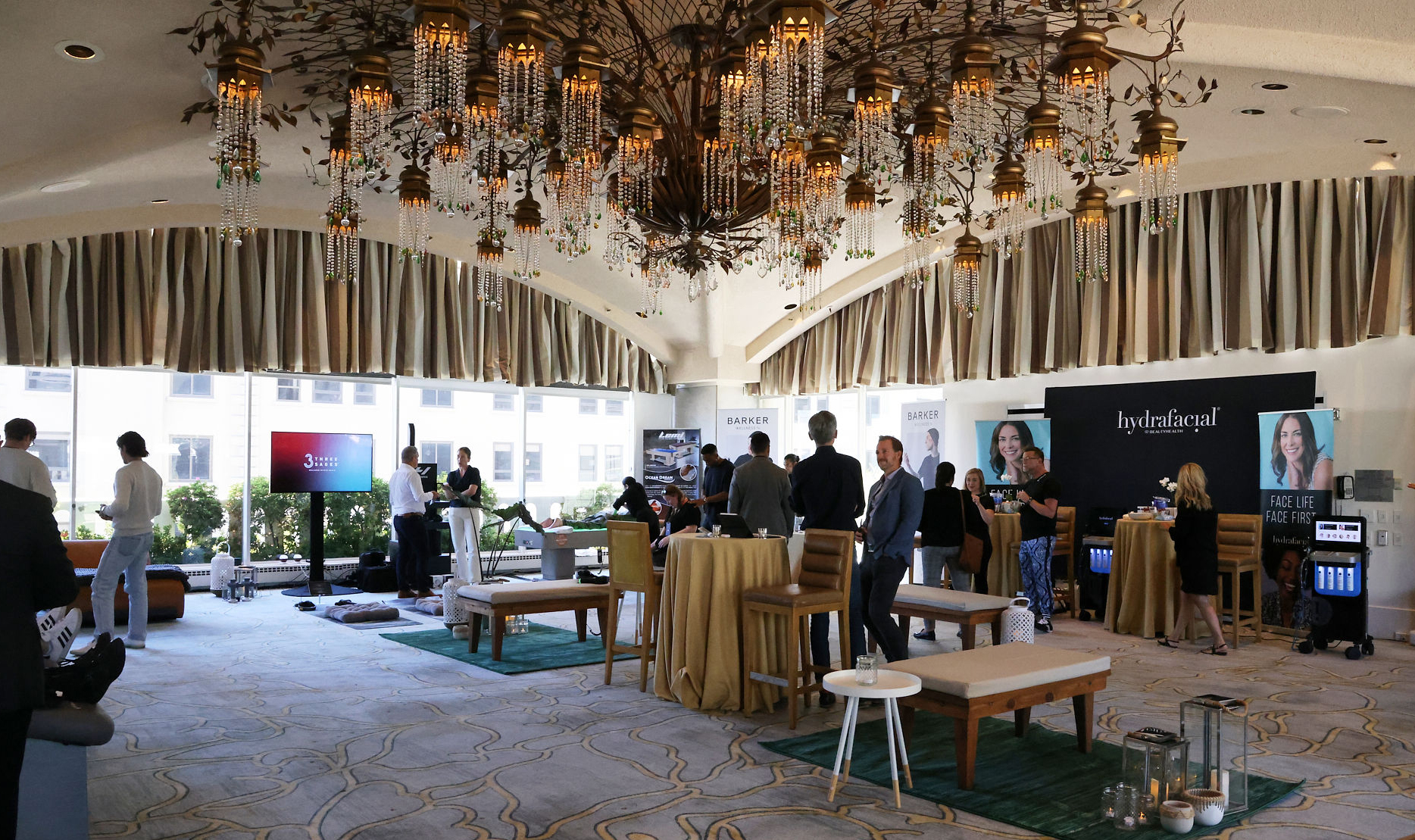 • A wellness mini-tradeshow (left) ran for several days, allowing attendees to drop in and try a Knesko eye treatment, a BeautyHealth HydraFacial, an immersive Resonate light mask, a freshly ground matcha drink, and other hands-on experiences.
• Wellness-themed gifting included Yeti water bottles, a Barker Wellness CBD sleep tincture, and cork yoga mats.
• Many of the activities offered as part of the event’s “Discover San Francisco” afternoon focused on fitness and cultural enrichment, including bike riding, a spa visit, a guided hike, and a tour of the Castro district.

Another topic underscored at GME was Accor’s commitment to sustainability. The company hired the impressive Brune Poirson (below) in May 2021 as its chief sustainability officer, and the former French minister of the environment and vice president of the United Nations Environment Assembly spoke to the group about Accor’s efforts to enact meaningful environmental change. Driven by a constellation of factors beyond being the right thing to do—guest expectations, governmental regulations, investor demands, and so on—the company is working to green its entire operation, Poirson said. 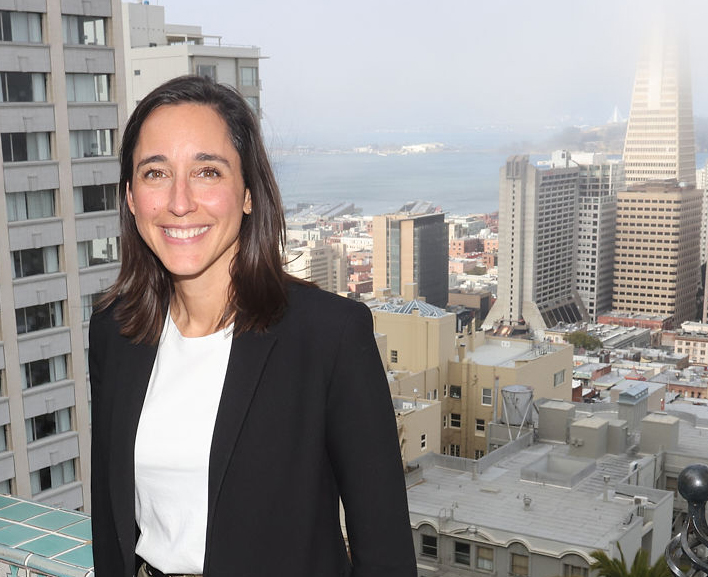 The company has committed to cutting its carbon footprint in half by 2030 and to net-zero carbon by 2050. It is also developing goals around biodiversity and nature, which will encompass efforts such as zero deforestation by companies in the Accor supply chain, reducing food waste, and reducing the amount of meat on menus. A third priority for Poirson is what she called “equal opportunities” or “social elevator” initiatives. Why? “Because we believe that it’s all well and good to talk about the environment, but at the end of the day if your people are not happy, if your people can’t make ends meet, and most importantly if this company isn’t trying to solve problems for people rather than create them, [the business] won’t work,” she said.

Coming in Hot
The GME crowd also learned more about Accor’s fast-growing product line. The company expects to open an average of one hotel a day across the globe in the coming year, many of which are of inte 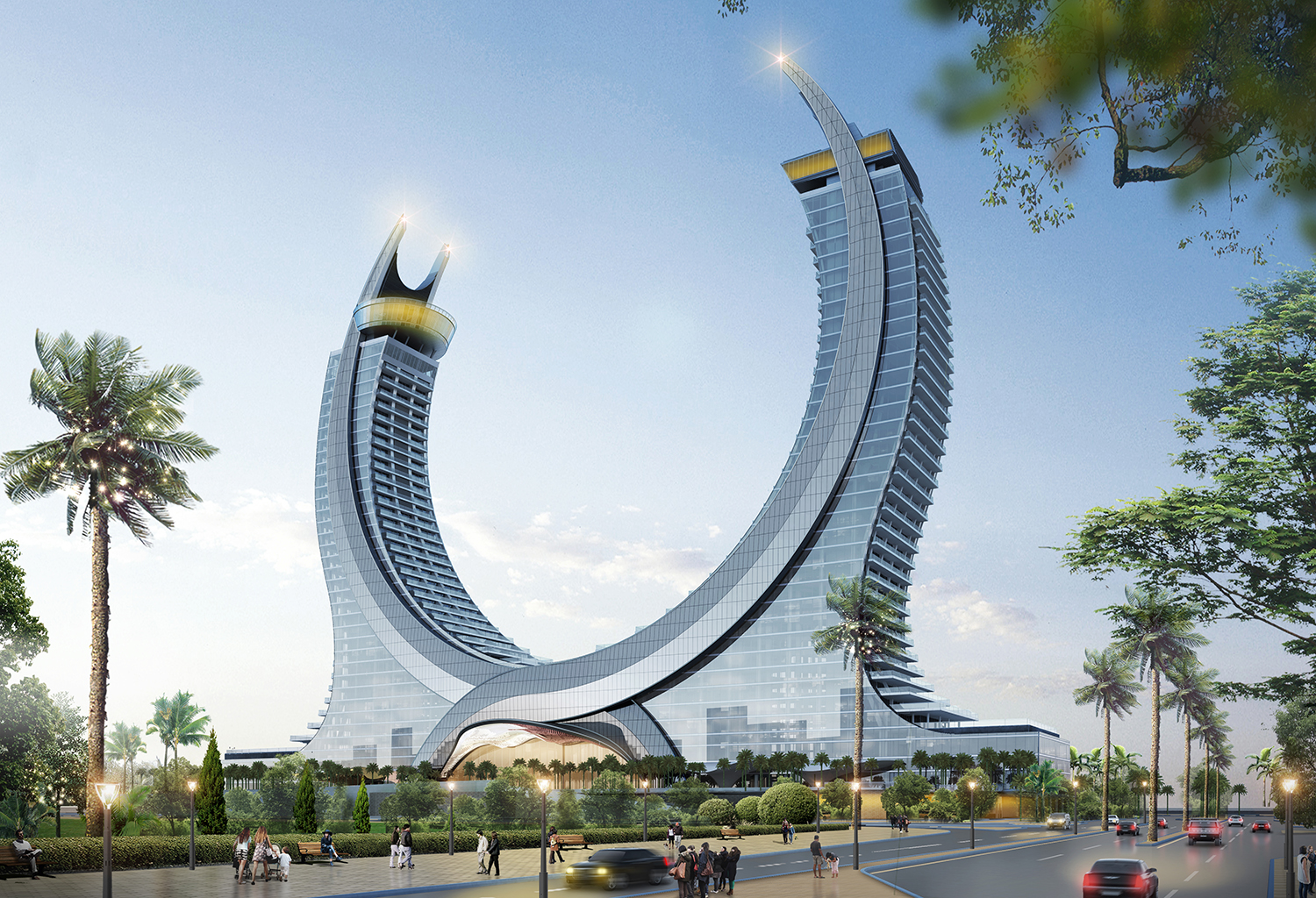 rest to meeting and incentive planners.

One standout property is the crescent-shaped Katara Towers (left) being built in Doha, Qatar, and expected to open in time for the World Cup this November. The striking dual-branded structure—half Fairmont, half Raffles—includes one of the 26 new Fairmont hotels opening in the next three to five years, according to Meenaz Diamond, Accor’s senior vice president of worldwide sales. (pictured, with Steve O’Malley, enterprise vice president, COO, Maritz Global Events, left, and Frederic Bendin, managing director, Hopscotch Group) Other destinations with Fairmont openings on the horizon include Prague (2023), Tokyo (2024), and Vietnam (2024). 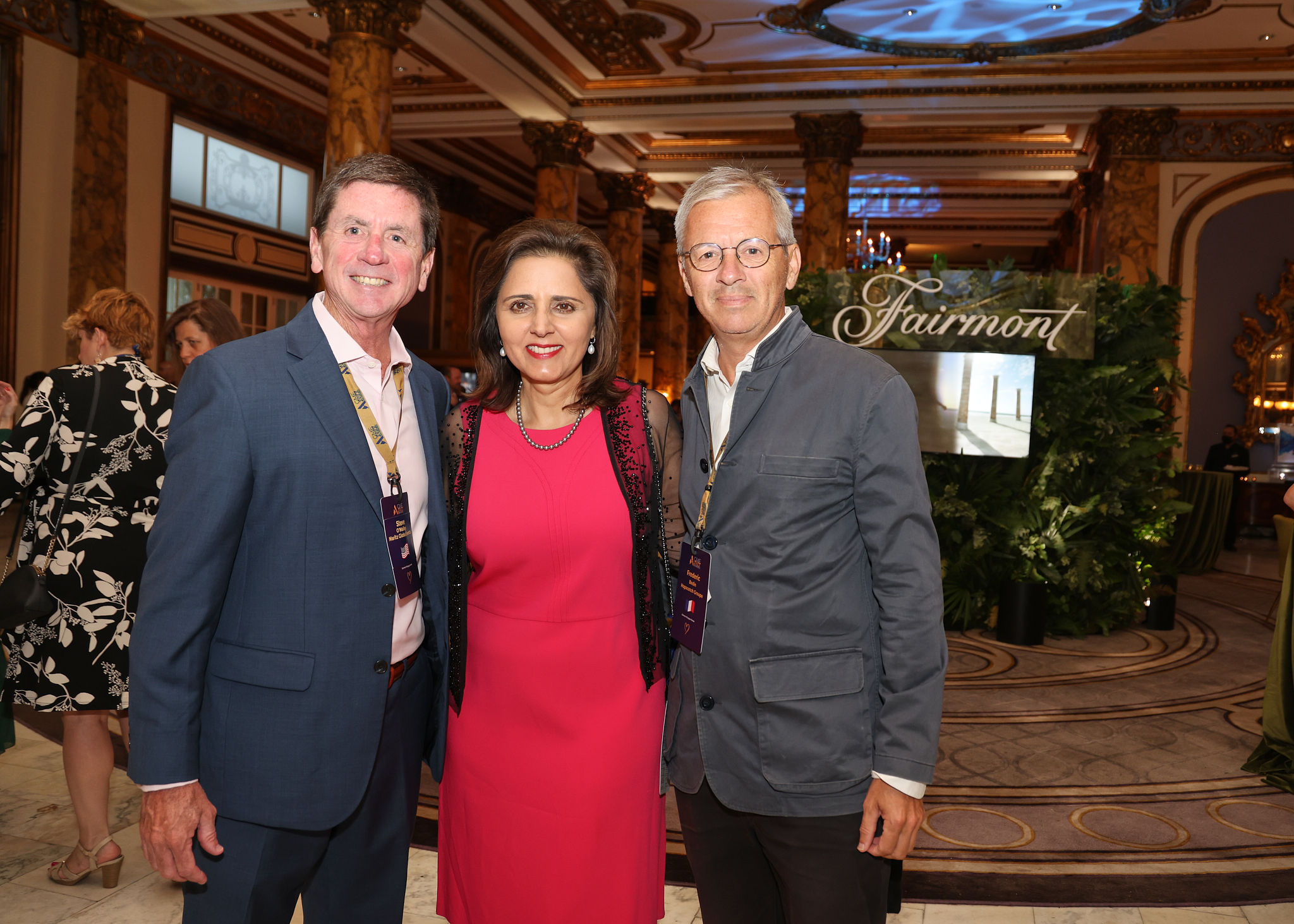 In addition to Doha, two other properties soon raising the ultra-luxury Raffles flag are the 147-room Raffles Boston expected to open in 2023, which will be the first Raffles in North America, and Raffles London at the Old War Office (OWO) opening late this year. For incentive planners, Accor’s relaunch of the historic Orient Express trains in 2024 is a development to watch. Accor’s chairman and CEO Sebastian Bazin told the GME audience the story of tracking down original Orient Express passenger cars all but forgotten in a railyard on the Belarus border, and the detailed restoration now bringing them back into service. The luxury trains will run mainly on private tracks through Italy, but the company has plans for international service to Paris and Istanbul as well. The Orient Express brand also has two hotels in the works, with an opening in Rome expected in 2023 and Venice in 2024 or 2025.

Accor executives also discussed their move into the premium all-inclusive market, with 100 new properties expected in the next five years across several brands, including Fairmont and Sofitel.