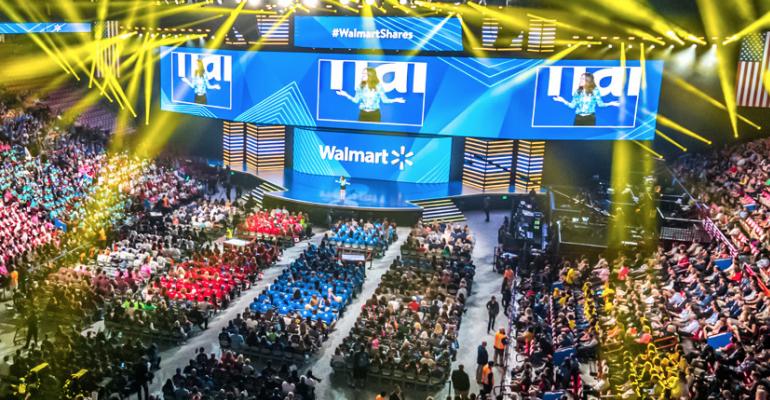 Way Outside the Box (Store)

On the scene and behind the scenes at Walmart’s three-day, multi-million-dollar incentive and shareholders meeting for 14,000 people.

Imagine being the lone attendee from your office sent on a company program to Fayetteville, Ark., with accommodations in a university dormitory and meals served to you inside a multi-level parking garage. Now imagine being ecstatic about it.

Each year, about 4,000 Walmart front-line employees from stores around the United States, 1,300 more from international Walmart stores, and 1,000 Sam’s Club employees from the U.S. are honored by their peers: They’re chosen to attend an over-the-top company incentive program dubbed Walmart Associates Week and Shareholders Celebration. Over the course of three days—this year, it was Wednesday, June 5 through Friday, June 7—these associates are part of an event that celebrates their work performance; presents inspiring examples of associates’ dedication to the job and to each other; educates them on new corporate initiatives and product lines; and allows them to share experiences and become friends with colleagues from far-flung places.

There’s a little bit of entertainment too. After meetings for domestic and international associates on Wednesday at two arenas on the University of Arkansas campus, participants eat dinner in the adjacent parking structure—and compete in a cheering contest versus associates from other regions—then return to the larger Bud Walton arena for a concert. This year’s performers: Don Felder of the Eagles and Peter Frampton. On Thursday, as the Sam’s Club associates meet at the smaller Barnhill Arena, a Walmart supplier expo kicks off in a huge park a few miles away. Resembling an upscale state fair, employees can pet a sheep, listen to music, play (tricycle racing or ziplining, anyone?), get a makeover, learn to dance, sample loads of F&B items from grilled sausages to Red Bull, and much more. 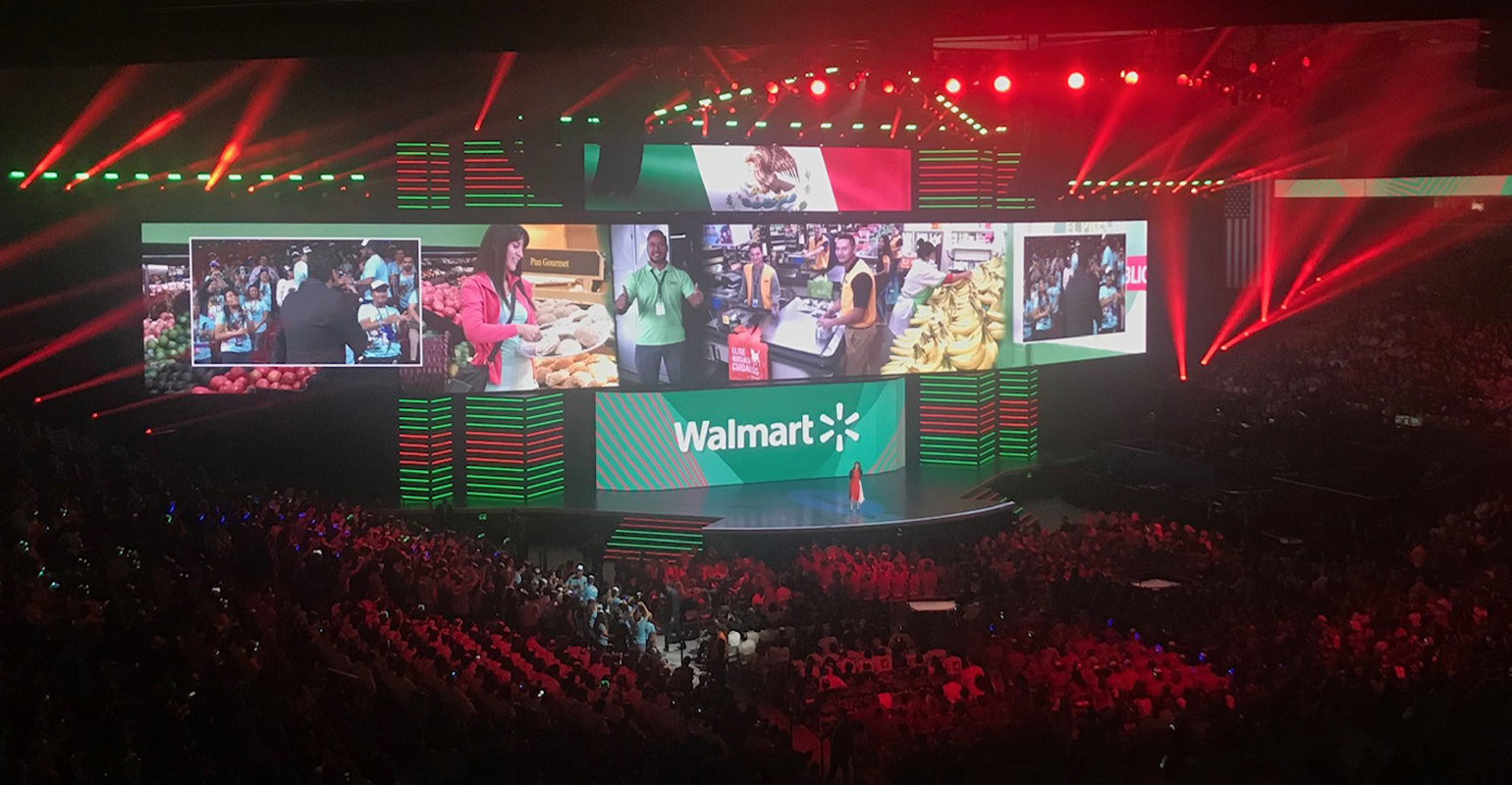 During the final event on the agenda—Friday morning’s annual shareholder meeting, held in Bud Walton Arena—all Walmart and Sam’s Club associates plus a few thousand employees from corporate headquarters in nearby Bentonville enjoy a three-hour spectacle that rivals a Hollywood awards show. It’s a mix of high-tech wizardry (this year, a stage with a 44-foot turntable in the center was set underneath a hanging series of LED screens measuring 20 feet tall and 140 feet wide, displaying 33 million pixels); performances from associates who won a worldwide talent competition; a live comedy skit this year featuring TV star Sofia Vergara and Marc Lore, president & CEO of Walmart’s e-commerce division; and music from headline acts (this year featured Bebe Rexha, Maren Morris, Lady Antebellum, and One Republic). And the entire gala is hosted by an A-list celebrity; last year it was Jamie Foxx, this year Jennifer Garner. 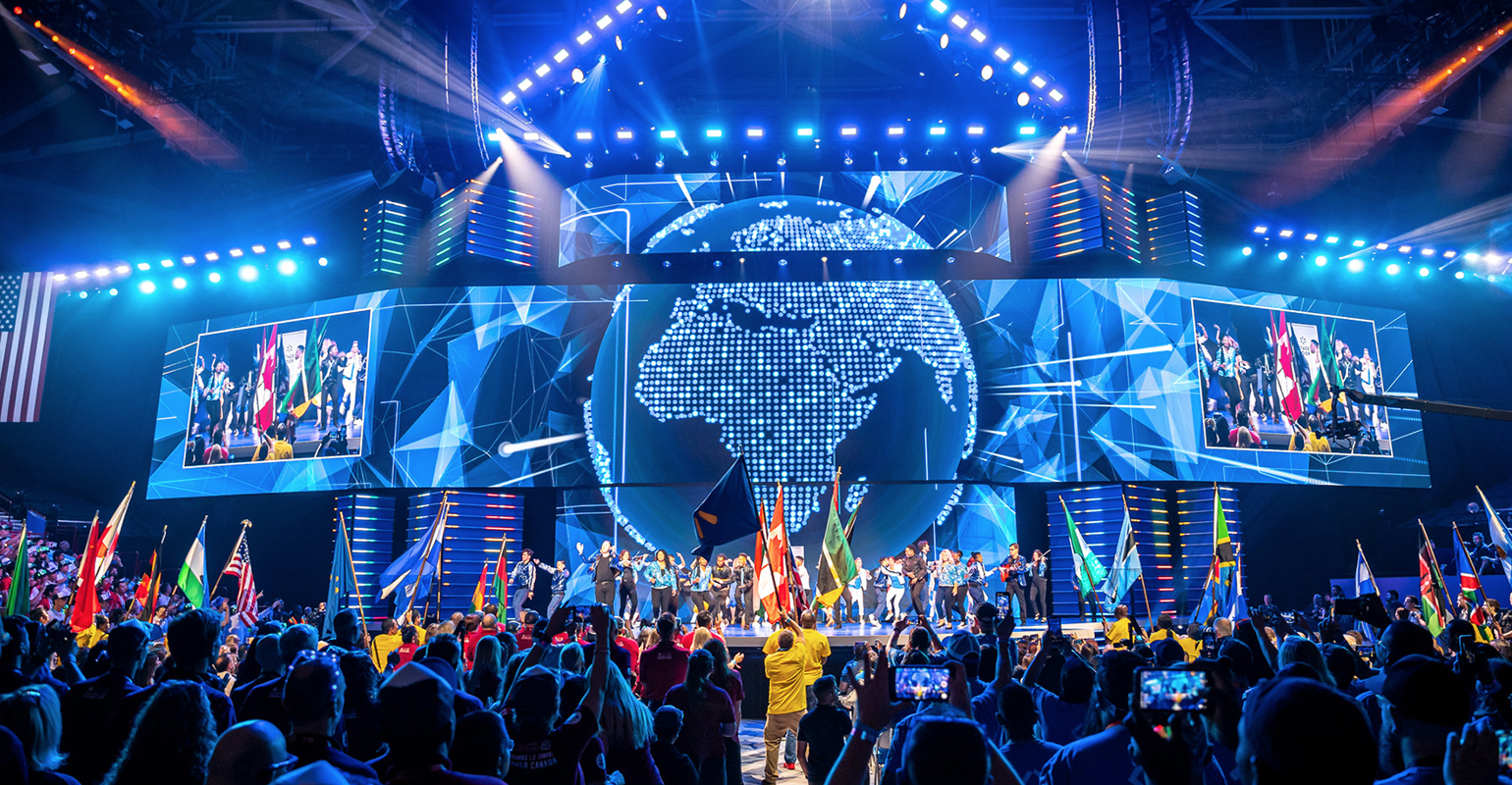 To understand the scale of the effort required to pull off the Friday shareholder meeting alone, consider this: Memphis-based LEO Events, the lead production agency for the week, brings 35 of its 50 employees to Fayetteville and hires another 300 freelance production people. About a quarter of them arrive in town 15 days out to load in 70 tractor-trailers full of equipment through a loading dock too small to accommodate big trucks, so they use forklifts to move everything into Bud Walton Arena. Then they set up not just the rigging, lighting, stage, screens, audio, and a NASA-style control room, but also a full-building replacement power supply plus supplemental air-conditioning units.

An additional challenge for LEO was to craft a set that worked for delivering corporate updates, new initiatives, and other messaging, yet could transition from those executive speakers and videos to dancing and musical acts, and back again. Quick set changes were essential to keep every professional band and associate-talent act on schedule: When an act finished, the turntable stage spun 180 degrees to allow staffers to remove and replace each performance set within 15 minutes while a business segment took place on the other side of the stage. The two sides were separated by another LED display wall that ran the length of the turntable. (To see a video of Walmart’s turntable stage in action, click here.)

Even with all of this on-the-scene activity, perhaps the most amazing aspect of the entire week isn’t what the planning team—led by Mark Henneberger, vice president of event services for Walmart, in partnership with LEO Events—actually created. It’s the fact that most of the planning does not begin until April 1; in other words, 10 weeks from start to finish for this three-day, multi-venue extravaganza.