At the Intersection of Strategy and Logistics

Mark Henneberger is the point person for all elements of Walmart’s Associates Week and Shareholders Celebration, combining a proven template with an outside agency’s creative ideas.

For three days in June, MeetingsNet writer Rob Carey made his way through Walmart’s 2019 Associates Week and Shareholders Celebration in Fayetteville, Ark., taking in the various events to learn how the extravaganza is coordinated and what the participants experience. The result is this five-part series.
Walmart, Part I: Way Outside the Box (Store)
Walmart, Part II: At the Intersection of Strategy and Logistics
Walmart, Part III: Planning for Sam’s Club: Raucous but Personal
Walmart, Part IV: An Open Field and a Parking Garage: Walmart’s Creative Expo and Meals
Walmart, Part V: Event Feedback and Next Steps

With roughly 18 hours to go before the main event of Walmart Associates Week and Shareholders Celebration—Friday morning’s shareholder meeting—various troupes of employee entertainers moved quickly on and off Bud Walton Arena’s main stage for their rehearsals while production staff observed from the arena floor to make sure all tech and lighting elements were working. The person who seemed most calm as the clock ticked down to showtime was Mark Henneberger, Walmart’s vice president of event services, even though ultimate responsibility for this world-facing grand finale falls squarely on him.

“I honestly don’t worry much once we’re on site,” he said while sipping water inside the show office underneath the arena. “My job here is to make our executives comfortable and confident because if they see me sweating, that’s not good for them as they’re preparing to go onstage. For me, the toughest time is the three weeks of run-up before we get here—all the meetings and the changes that come up in that time.”

Right after executing Walmart’s “year beginning” strategy meeting held each March for nearly 7,000 store managers, Henneberger turns his focus to Associates Week and Shareholders Celebration. “While we use it to introduce the company’s big strategies and initiatives and connect those to what we stand for, this event is primarily about being celebratory and inspirational,” he said. “That objective goes back to the early 1970s when Sam Walton actually hosted associates at his house. Sam never wanted a straightforward business event; he wanted celebration and entertainment components. So the shareholder meeting has its business components but also a lot of cheering and team colors, plus performances by professionals and employees.” And since the University of Arkansas opened Bud Walton Arena in 1993, the domestic associate meeting and the shareholder event have been held in a venue that holds 14,000 people. “The goal is to have all our associates go back to their stores excited to tell their coworkers about the experience, and be proud and energized in front of customers for a long time,” Henneberger noted.

But how does nearly all of the event theming, messaging, and planning get done in just 10 weeks? First, Henneberger uses a proven template. “Each year, we have a new staging device, new messages, new performance artists, and a new host, but the basic plan for bringing in and presenting to 6,500 associates plus 7,000 corporate employees, outside shareholders, and media has to be templated,” he said. “Actually, if you look at the entire ‘week at a glance’ booklet from three or four years ago, it’s very similar. We just vary it each year with unique experiences.”

The shareholder celebration experiences in particular are developed mainly by two veterans at LEO Events, the production company behind Walmart’s event: David Kenyon, senior vice president of production services, and Chris Simmons, vice president of creative services. This was the fourth year that LEO Events handled all the events across the week, though Kenyon has worked on Walmart’s shareholder meeting since 2008. In brief, the planning process for the shareholder meeting works this way: Guided by Walmart’s objectives and priorities, Simmons comes up with a stage design along with a combination of high-tech and low-tech elements and develops an overall flow for the show. Once Henneberger signs off, Kenyon makes Simmons’ ideas work logistically and technically, and adhere to Walmart’s brand-style guide. 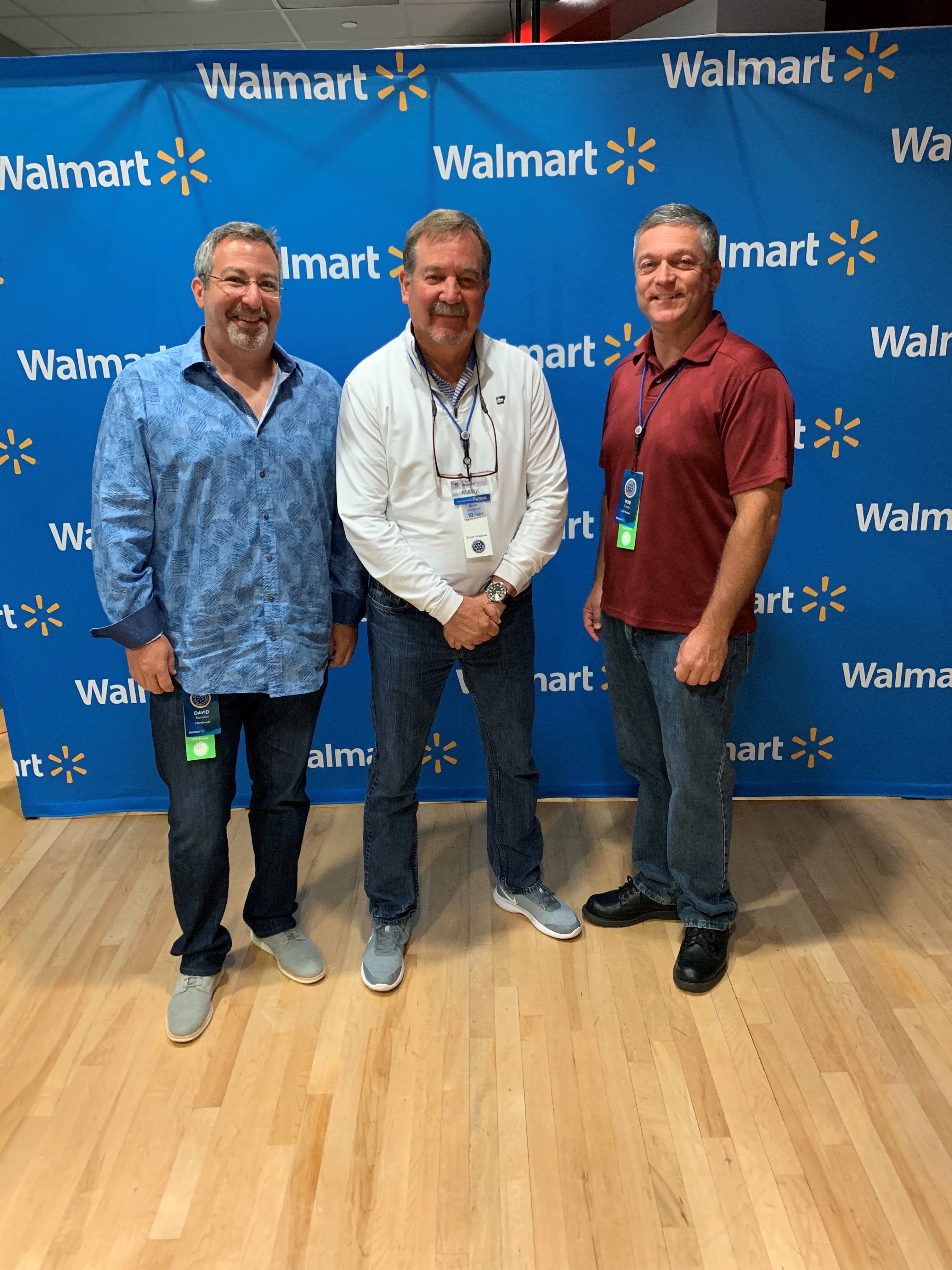 “We’ve had five production partners over my 13 years here, and the hardest part is that first year working together,” said Henneberger (pictured in middle, with David Kenyon at left and writer Rob Carey at right). “All of the companies are very capable technically, but getting them to understand the humanity of the brand and come up with ideas that help bring that to life and amplify it does not come quickly. The biggest thing is that the LEO folks really understand the brand; when I say, ‘I want to focus on associates,’ they figure out how to have associates introduce our executives on stage, and how to work in video segments about associates doing great things for customers and for each other. They make the brand’s ‘why’ come to life in the way we want it.”

For instance, “we consider ourselves to be storytellers, but we want to take advantage of technology to create the ‘wow’ factor to go along with the human-touch points,” Henneberger added. “David and Chris come up with some really cool ideas,” like the turntable stage and panorama of LED screens this year, as well as a hologram of the late Sam Walton speaking on stage last year. “I’ll admit that we were skeptical about the hologram idea,” he noted. “But many people were crying as they watched Sam. It was truly amazing.”

Two other things Henneberger admitted to: First, “the one thing I do start thinking about many months ahead of time are the possibilities for the program host and musical talent.” The effort to land a widely appealing actor or comedian plus a diverse mix of popular bands—all at a not-too-stratospheric price—is led by Kevin Underwood, senior vice president of event services at LEO Events.

Second, “the only thing I worry about the day before the shareholder meeting is the weather for the hired talent to get into Fayetteville on time. If there are thunderstorms and one of the acts can’t get here to perform, we have a big problem. I might be up there doing some acting and dancing.” No, not really; plan B is to have one of the other bands perform a second time.