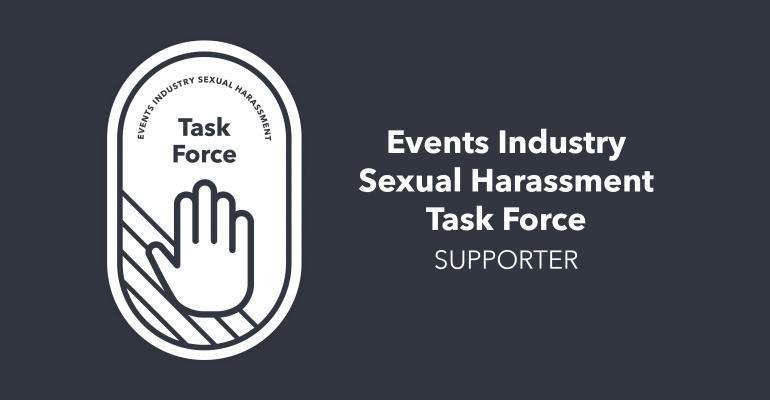 Industry Moves to Stamp Out Harassment

A new campaign to raise awareness of event industry harassment asks people to do their part to create a safer industry.

In spring 2018, nine industry organizations signed on as founding members of a coalition aimed at eliminating sexual harassment at meetings and events: the Events Industry Sexual Harassment Task Force. The group has launched a new initiative—the Task Force Pledge—to raise awareness of the issue and unite the industry.

During the IMEX America conference and expo in Las Vegas, the task force will hold a ceremony where five prominent meetings industry executives will sign their names to the pledge: Philip Eidsvold, CIS, CITP, president, of the Society for Incentive Excellence and vice president of strategic alliances at One10; Carina Bauer, CEO of IMEX Group; Paul Van Deventer, president and CEO of Meeting Professionals International; Susan Robertson executive vice president at ASAE; and Kiki Fox, co-founder of AWE and senior manager, national sales with Core-apps. ​The signing event will take place at the start of the Women in Events Pink Hour reception (no charge, all genders welcome) on Wednesday at 4:00 p.m., at the Association for Women in Events booth (#​F3666).

The pledge doesn’t address meetings and conferences explicitly but asks people both as individuals and as employers to adhere to sexual harassment policies, help to create an atmosphere where harassment isn’t tolerated, support reporting channels for inappropriate behavior, and other steps. See the full text and sign the pledge here.

Amanda Armstrong, CMP, assistant vice president, global travel and meetings, at Enterprise Holdings, who was the chair at MPI in 2018 when the group was formed, commented on its progress. “In a very short time, we formed a community and a task force with nine (plus!) organizations and created free training to increase awareness. Now, our peers are asking, ‘what can we do to help?’ Simple...take this pledge to show your support. United we stand to make the hospitality industry a safer place to work for everyone.”