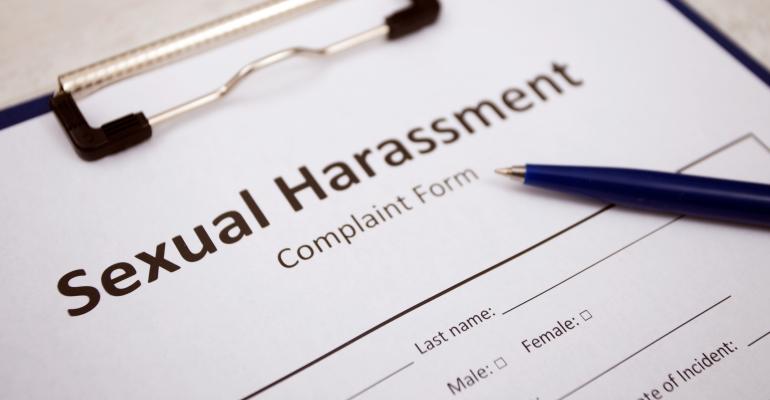 It’s not enough to just have a sexual harassment policy or meeting code of conduct if it isn’t enforced or doesn’t have any real consequences for the harasser. But creating one—or ensuring your existing policy has real teeth—is a good place to start.

At an MPI WEC session on sexual harassment, Courtney Stanley of CS Consulting and her co-presenter, Sarah Soliman, president and CEO of Soliman Productions, strongly suggested researching the options with legal counsel, and seeking out examples from other organizations.

One key element to any sexual harassment policy is ensuring that there is no retaliation or repercussions for reporting an incident. This is particularly important when someone is being victimized by a client, board member, or other VIP, said several respondents. “They ought not fear losing the client/account if they report unacceptable behavior by the client or their meeting attendees.”

When a board member harasses staff, it’s often ignored or handled indirectly by trying to limit contact with the staff person who was harassed, said one respondent. “But that can mean penalizing the victim by not giving her opportunities to attend certain functions/meetings, which can have a negative impact on her career. A move to completely independent third-party reporting/enforcement might be an answer; however, I also worry that could be abused.” It also may be helpful to describe what harassing behaviors are, possibly with examples, said several respondents.

And, of course, any policy or code of conduct must include consequences that level up depending on the severity of the harassment. And those consequences should not include shuffling the harasser to another department or property, said many survey respondents, though that’s what happens now in many cases.

RELATED READING: Click here for the complete package from our #MeetingsToo coverage.

Share your policy not just with in-house staff, but also with clients, vendors, and attendees. Soliman and Stanley suggested asking attendees to read and agree to the meeting’s code of conduct as part of the registration process, and/or make it a mandatory screen on the mobile app.

Signing the code not only gives attendees a moment to consider the boundaries of professional behavior, Stanley noted that it also gives planners some leverage. If necessary, they can point out that a person is not behaving according to the code of conduct they opted into, so they have to accept the consequences. Several survey respondents suggested that the policy should be announced at the meeting, and displayed on signage around the conference and next to all bars. 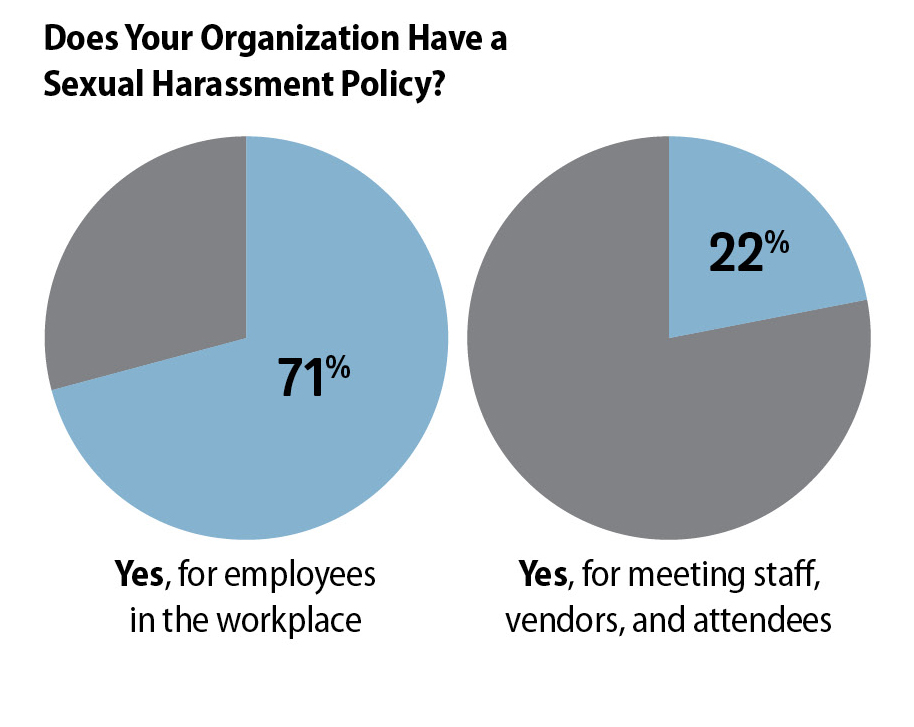 Staff also needs to understand the code, be trained on how to handle an allegation, and know who the point person is for these types of incidents. This goes beyond just event staff. All employees of the host organization should be trained on what to watch for, how to intervene, how to report it up the chain, and how to support the person who was harassed, said a survey respondent. Added another, “Also, there must be education for boards and leaders to understand the liability of harassment and the potential legal, media, and political impacts.”

If an incident does occur, listen closely and explain the steps outlined in the plan you have in place, said Stanley and Soliman. “Listen, show support, and be professional. Try to set aside the bias that you might have based on what you’re hearing. But don’t be afraid to take action,” said Stanley.

And don’t worry about having to judge someone’s intent or the seriousness of the incident, says Stephanie Davis, Esq., SPHR, SHRM-SCP, who for more than 20 years has been handling sexual harassment issues both as an employment attorney and now as president of HR consulting company Employment Practices Solutions. “What is important is not how you define what’s uncomfortable or unwanted—it’s how the person who is feeling uncomfortable defines it. We have to respect that if someone feels uncomfortable, that’s the end of the story. The behavior has to stop, regardless of what you or anyone else feels about it,” she says.

Carrie Abernathy, CMP, CEM, CSEP, cofounder and past president of the Association for Women in Events, sees “real momentum” in the #MeToo movement, “but it is up to all of us to keep that momentum moving forward.” Publishing a code of conduct with clear consequences and an action plan on your registration page and on-site guide, she says is a great first step. Then follow the plan when an incident is reported. “Let’s make sure this is something that is standard at all events—small changes lead to bigger changes.”

She adds, “I think every person has a personal responsibility to act and affect change when it comes to sexual harassment. We can be agents of change every day by sharing education and resources with others. There is no single solution for this problem—it is systemic and needs to be tackled every way possible, by as many of us as possible.”

This spring, Abernathy helped to organize nine meetings industry associations into a cross-industry taskforce on sexual harassment. The coalition plans to provide education and resources that will cross industry boundaries. “This is really about eradicating all sexual violence, full stop,” she says. “I hope that our suite of resources will ultimately contain scenarios on workplace harassment, assault at events and meetings, yet will be relevant for other situations as well. Sexual harassment and violence is a cultural issue—not workplace-specific—and we need to tackle the root causes, wherever they may lie.”