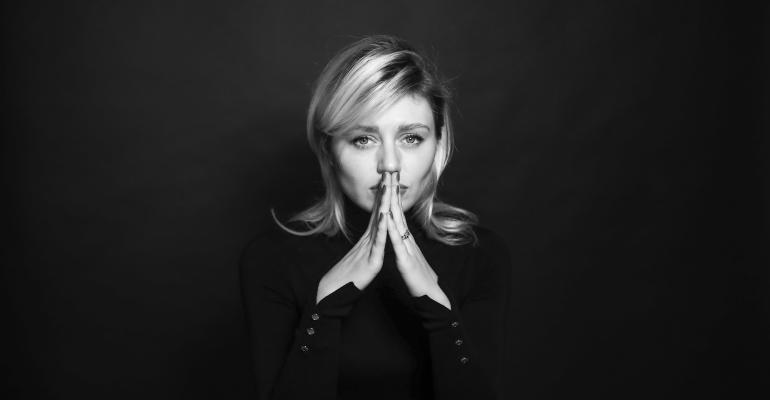 Fifty-six percent of female meeting executives say they’ve been sexually harassed in a professional environment. This and more from MeetingsNet’s new survey on harassment in the meetings industry and the workplace.

This may read like a dystopian version of a Dr. Seuss narrative, but it’s the words of respondents to a MeetingsNet survey conducted in June asking meeting planners and suppliers about their experiences around sexual harassment in the workplace.

While last fall’s #MeToo moment took down high-profile sexual harassers in the entertainment and political realms—414 in total were publicly outed as of the end of June, according to a study by crisis-consulting firm Temin & Co.—victims are across all industries. And as we learned from our survey, that most certainly includes the meetings and convention world. As one respondent commented, “Almost every female producer I know who’s helped install a lavalier mic on an executive has been verbally harassed with lewd comments about it.”

In fact, 40 percent of respondents believe that those involved with the meetings industry are even more at risk than those in the working world at large, due to what Courtney Stanley, owner, CS Consulting, calls a “perfect storm” of late-night events, free-flowing alcohol, and people being away from their families and everyday work life. One survey respondent’s anecdote illustrated it this way: “I remember being harassed on an airplane by a group of men all traveling to the same conference. As we got off the plane, one of them apologized to me saying, ‘They’re not really like this; they’re just all jazzed about this big convention.’ I replied, ‘I appreciate your apology, but yes, this is really what they are like, in public, to strangers who happen to be women.’” 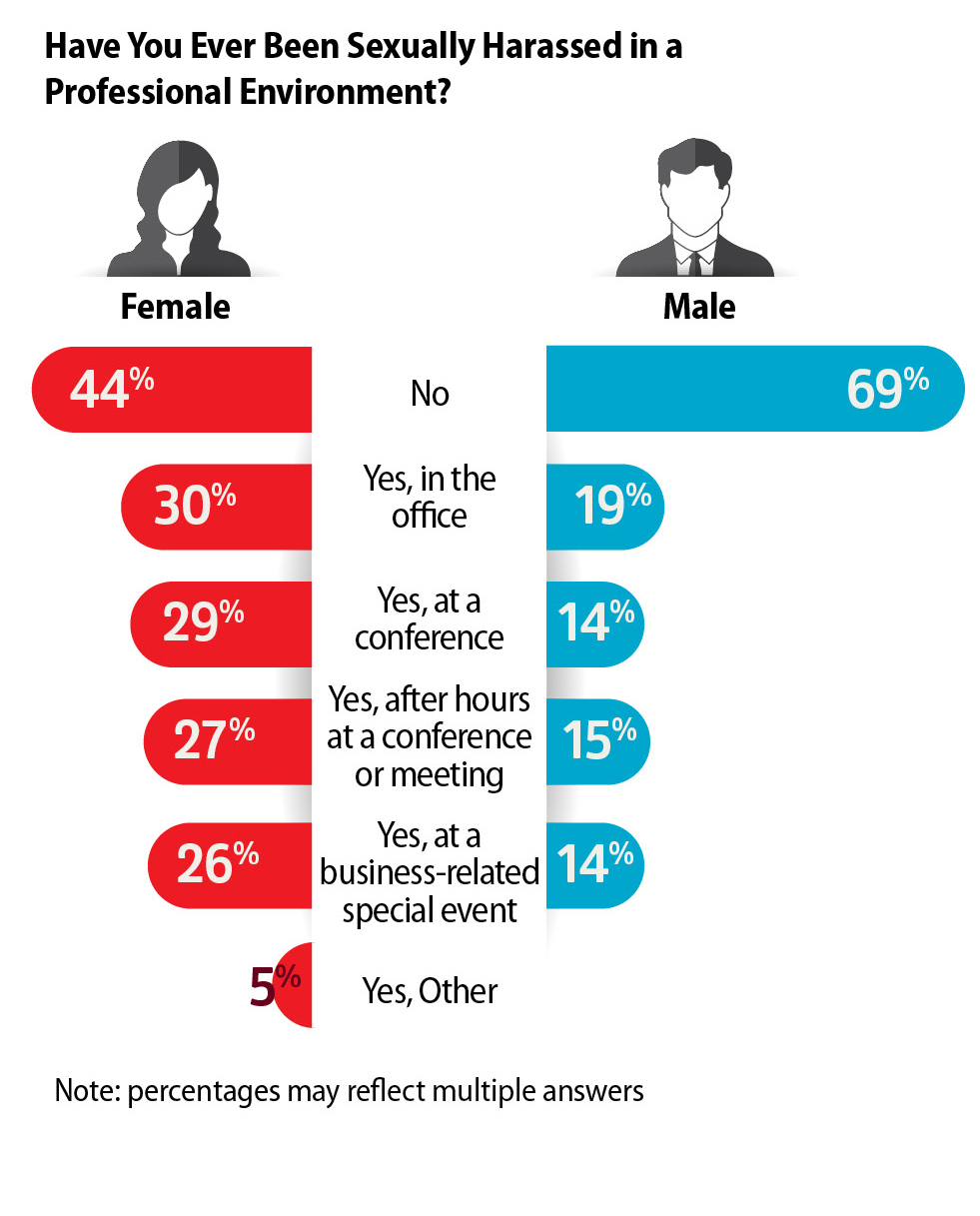 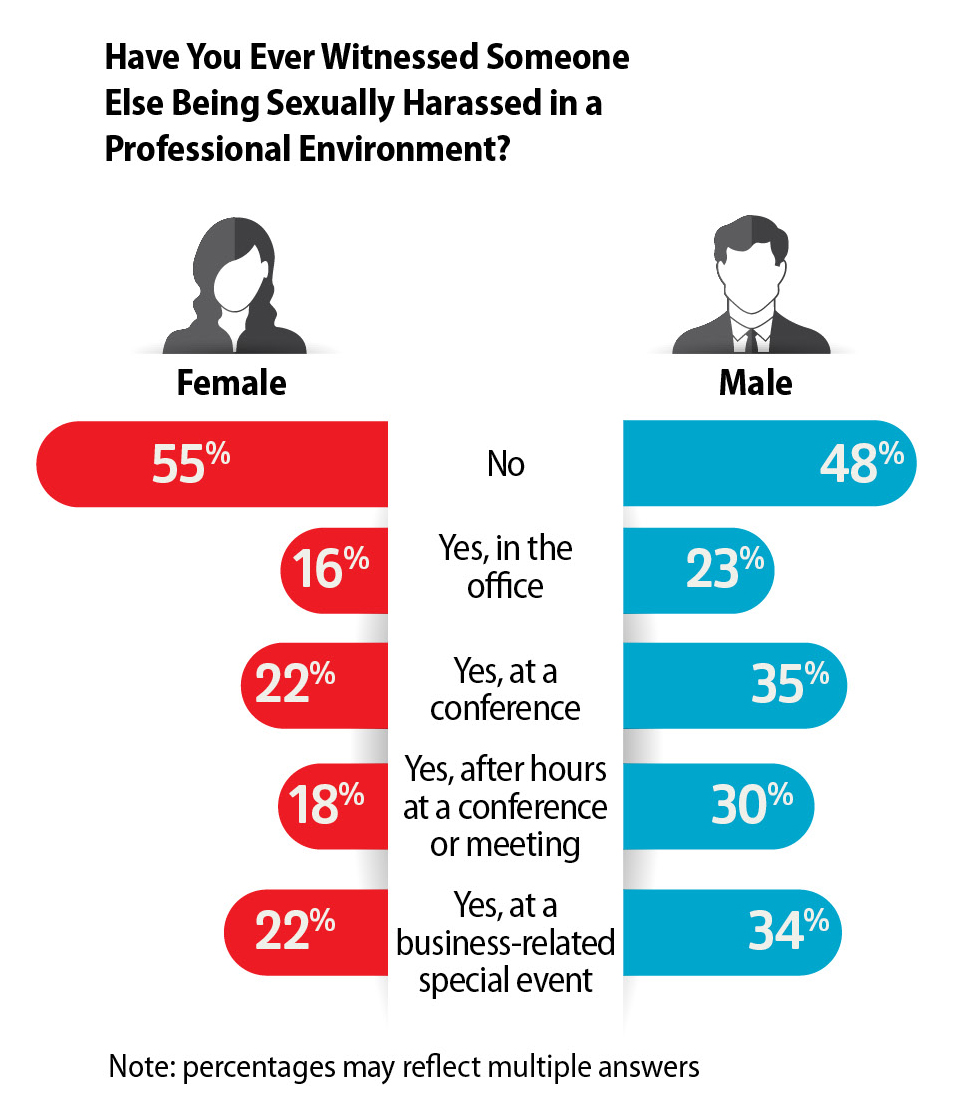 But harassment stems from more than just opportunity and environment—and most respondents (60 percent) said it’s no more prevalent in the meetings industry than in any other workplace setting. “At its root, sexual harassment isn’t about lowered inhibitions, or drinking, or sex for that matter. It’s about power,” commented one meeting professional who asked to remain anonymous. “That’s what makes it such an intractable, difficult, systemic challenge.”

I’d Rather Quit than Fight

The way respondents react to sexual harassment often reflects a combination of their personalities, work situations, and the severity of the harassment. Some, such as this male respondent, said, “I had a conversation with the other party and let them know it was uncomfortable and that was the end of the issue.” One female said, “It depends on the situation. Usually I just deal with it directly or I avoid the person altogether.” But even if it does feel safe to have that direct confrontation, it sometimes can escalate the situation. Said another female: “I told the man to stop touching me. He insulted my looks in response.” One respondent asked hotel security to escort her to her room after an incident.

But many more said that they would rather quit their job—and did—than report it.

Or they said that being harassed is just part of the job. Or that they were afraid of being judged, even though they did nothing wrong. “Even the action of speaking up could hurt our credibility and our careers,” says Lisa Palmieri, vice president, global enterprise solutions, Meetings & Incentives Worldwide, “The people who have power over you know you have no recourse.”

RELATED READING:   Click here for the complete package from our #MeetingsToo coverage.

The survey results bear that out. A small fraction of the quarter of respondents who said they did report an incident to a manager, human resources, or another in-house authority said that the manager dealt appropriately with the situation, that they felt listened to, and that the perpetrator was fired, transferred, or punished, and that they felt safe in their workplace afterward.

However, many respondents said they felt that if they did report an incident of harassment, it would be ignored, not taken seriously, brushed off as “boys will be boys,” or deemed not worth risking a valued client’s goodwill. As one said, “I was told to suck it up.”

“[The harasser] was the HR director, so my boss told me to let it go,” said one. Another said, “I reported the harassment to my internal HR team, but because the harasser was a client, there wasn’t really anything that could be done.” A male victim said, “Nothing was done because I am a male, and the perpetrator was female. People will automatically brush this off as if it doesn’t exist; it is often as prevalent (if not more so) as harassment directed towards females by male figures.”

The danger of inaction is, as one person said, that “Repeat offenders continue to offend, so it’s created an environment where we don’t report it anymore.” And sometimes, it takes a barrage of reporting to get traction. One respondent said her initial report got no response, but after several years of similar reports from other women, management finally fired the offender.

In some cases, reporting an incident could result in worse than inaction and belittlement. One person reported that the victim was admonished for drinking alcohol at the after-hours event where the incident happened, but no one even spoke to the board member who had harassed her. Another said, “When I reported the experience to my boss, who happened to be my CEO, he responded in a condescending tone, ‘Well, since you have told me, I’m going to have to do something about it.’ I was forced to sign a nondisclosure statement to ensure that I would never speak of it again. Over the next three months, my duties were slowly taken away from me and I was eventually terminated. My harasser still works in a management position in the company.”