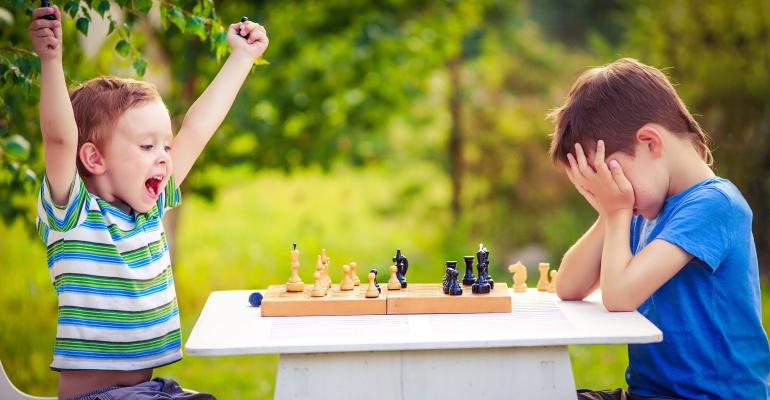 What Do We Lose When the Only Focus Is on Winning?

I was watching TV last night when a commercial came on for H&R Block. Starring Jon Hamm of “Mad Men” fame, the punch line is “Get your taxes won.” I’d seen it before, but for some reason this really hit me this time: Since when is filing a tax return a contest?

We appear to be gamifying everything nowadays—I think we have more reality TV shows now than we do dramas or sitcoms. The most recent stat I can find is a couple years old, but at that time 67 percent of network and cable shows were “unscripted” and the trend seems to be continuing. Apparently, even advertising execs are putting their money on viewing non-gaming activities like filing tax returns through a gaming lens.

And now that the U.S. has a president whose background includes being a reality TV star and a whose vocabulary and mindset seem to be very much focused on “winners” and “losers” in most contexts of public life, commerce, and diplomacy, I expect to see even more gamification language creep into every aspect of American lives.

I get it, I really do. I’m a sucker for games as much as anyone. I’ll be the first one snapping photos on the trade show floor to upload to the show app and get those points, and I have become an armchair music critic who loves to watch “The Voice.” Adding a competitive edge does amp up engagement—who doesn't want to top the leaderboard? But I do think there are realms where life should not be approached as a contest—where you actually could lose by winning, and win by losing, as weird as that may sound.

For example, say you succeed in attracting a new market segment for your conference, upping your attendance in a meaningful way. Win! But, not knowing as much about this new audience as you think you do, your content ends up missing the mark for the newcomers. They take to social media, tweeting and Instagramming and Snapping their dissatisfaction. What was a win now is a losing proposition. The organization loses the potential for long-term new attendees, the new attendees lose out on a learning opportunity. Sometimes, winning leads to a sense of invulnerability that could blind us to the fact that one win doesn't mean the game is over.

Alternatively, say your established trade show has been losing traction for several years, to the point where it no longer makes sense to keep holding it, even though shutting it down will hurt your bottom line. Lose. Except for the fact that that loss causes your organization to rethink how buyers and sellers want to interact in 2017, and you launch a radically new environment where they can learn and build relationships in a more meaningful way. Sometimes, losing leads to learning.

That’s basically what happened with the American Society of Association Executive’s Springtime show, which ASAE is replacing with a new event called the Xperience Design Project, or XDP. While it’s too soon to call it at this point, it appears to have been pretty successful when they took it out for a test drive recently. I’m predicting a win, and not just for ASAE, but also the participants—planners and suppliers—who get a new, more effective environment to create new learning and bonds.

I guess I’m just a little tired of thinking everything can, or even should be, boiled down to a contest, that we should be sitting in judgment of so many aspects of our lives, our worlds, and, yes, our events.

I would much rather focus energy on how we can come up with solutions that everyone involved can benefit from in some way. You know, like you do when you’re negotiating contract terms with your supplier partners. Yes, you do your best to ensure it’s a little lopsided in your direction, but you know that there has to be something in it for your partner as well. I refuse to believe our world has changed to the point that the old “win-win” concept isn’t something we should still be striving for.

Oh, and also a few less Kardashians and housewives of various locales and dance moms and cooking contests—would that be too much to ask?

Why Planning Incentives for Refugees Made Me a Better Professional
Feb 07, 2017