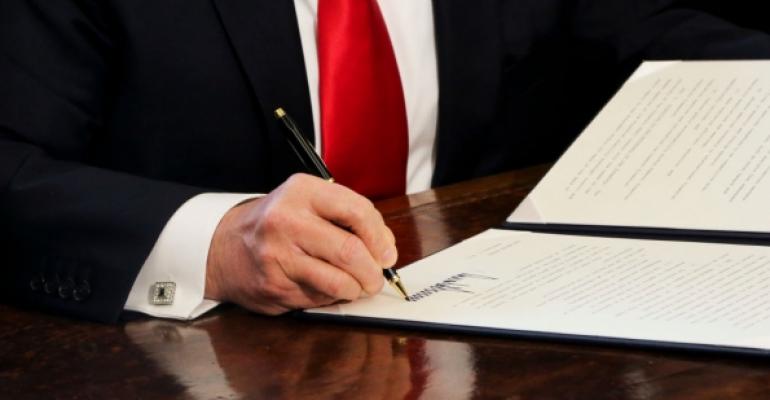 The Trump administration today signed a directive that put the brakes on the Department of Labor’s “fiduciary rule,” which would have required anyone providing investment advice for retirement accounts, such as IRAs and 401(k)s, to be held to a “fiduciary standard” beginning April 1.

Financial and insurance companies have been on alert since last year when the DOL announce the new rule, reviewing their compensation structures, and considering the possibility of eliminating commissions and incentive programs altogether.

Arguing that the DOL’s fiduciary rule limits consumer choice, Trump has ordered the DOL to review and defer implementation for 180 days. According to Reuters, the administration has asked the DOL to conduct a “legal and economic review of the rule. If the department then concludes the rule is out of step with the administration’s policies,” it should rescind it.

Nevertheless, anticipating the DOL rule, many financial services companies are working toward compliance. At the Financial and Insurance Conference Planners Winter Symposium in Boston at the end of January, Kristina Lopez, Vice President, Morgan Stanley Wealth Management, and Jeff Calmus, vice president of global event management, MetLife, led a session updating participants on the DOL fiduciary rule. While expectations of President Trump’s order to halt implementation was high, the panelists said they anticipated that change would continue on some fronts.

“There is talk that there might be a six-month delay or a year delay or even a repeal, but given all the things that we’ve done, it’s bigger than DOL,” said Lopez, who has been working for two years analyzing implications of the DOL rule. Because Morgan Stanley has “looked into this in terms of how to better insure controls and to insure that our financial advisors are acting in our clients’ best interest, we will still move forward with a lot of the changes that we’re planning,” she said. She was clear that Morgan Stanley sees the value of education and meetings, “but there will be more scrutiny.” Larger company events are considered valuable, “as long as it’s properly documented in terms of the agenda, presentation, education, and we’re the ones picking the financial advisors who can attend.” But, Lopez said, small events are still being reviewed. “Smaller events with 10 or 15 advisors, those are the events that we’re still analyzing to what extent we can really control and show that our financial advisors were not conflicted.”

In addition to a halt to the fiduciary rule, the White House has ordered a review of the Dodd-Frank Act rules enacted in response to the 2008 financial crisis.