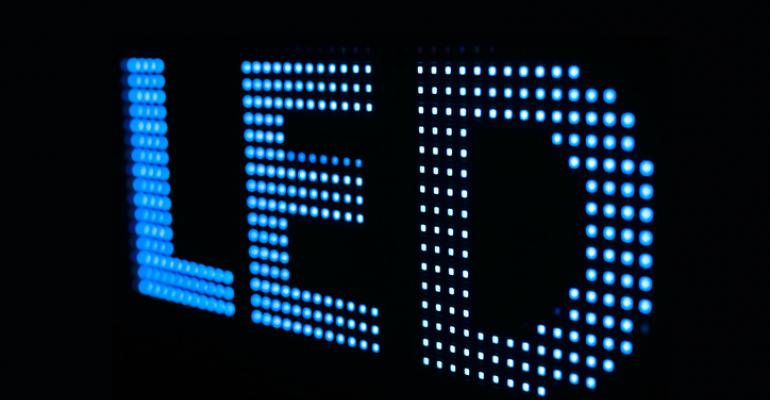 They may be small and have a funny name, but LEDs can make a big impact on the look and feel of your next show.

Light-emitting diodes, or LEDs, have been around for a while now. You’ve probably been using them on your Christmas tree for years, and most new automobile headlights are LED. Though they aren’t new, they are still affecting the theatrical lighting world in a big way—but their usefulness doesn’t stop there. If you have a stage to light up, a ballroom desperate for pretty colors on the walls, or you want to have different looks for different parts of your show, LEDs are the answer.

Traditional theatrical lighting instruments (a.k.a. fixtures) have lamps in them: tungsten-halogen, quartz-halogen, and before that, incandescent lamps. These lamps are hot, bright, bulky, hard to work with, and sometimes short-lived. On the other hand, LEDs consist of clusters of very small bulbs, grouped together to emit dimmable light in almost any conceivable color.

Here are just a few of the LED’s advantages:

LEDs use one-fifth of the energy required to generate the equivalent light output of a tungsten-halogen lamp (as found in traditional theatrical lighting instruments).

If you are trying to make your event more “green,” LEDs are a good way to provide a diminished power consumption footprint. Less power consumption also means that you can now power some LED fixtures with batteries. There are simple up-lights, used for adding color to perimeter walls, drape lines, etc., which can be run entirely on battery power, meaning there are no cables to clutter the floor or to trip on. These can be wirelessly operated by Wi-Fi or Bluetooth signal.

While this might not sound like a big deal, it actually is. Because LEDs produce far less heat than conventional lamps, the stage (and the area around it) doesn’t get nearly as hot. This means your room will require less air conditioning, and you will get fewer sweaty faces on the stage.

Less heat also means the individual instruments can be handled more easily by the lighting designer, especially during the vital “focusing” part of set-up (when the instruments get pointed at just the right spot on the stage, and often shaped, via internal or external apertures or doors) to put light only where you want it. This speeds up the set-up process, and saves you money on labor hours.

Less heat also means the instruments can be closer to each other, and closer to wood or fabric (like drapes, flats and set pieces) with a substantially diminished risk of overheating, melting, or burning anything close by.

Finally, less heat means that if the instrument is located outdoors, and Mother Nature decides to add some moisture to the proceedings, LEDs are far less likely to, well, explode—as often happens when super-hot lamps meet water.

This is by far the greatest asset of LEDs. For decades, if you wanted a moment in your show to have, let’s say, blue lights in use, you had to have instruments in the lighting grid with a blue gel (special colored transparent paper) affixed to the front. Those lights then could only project blue. If you wanted red later in the show, there had to be another set of fixtures up there with a red gel. This goes for every color in the spectrum. And, of course, white light (called “no color” in the industry) was achieved by using instruments without any gels.

So, if you wanted more than just plain white light on your stage, you often had to have dozens, even hundreds of lighting instruments in the ceiling. This took lots of time and lots of labor, added lots of weight, pulled lots of energy, and created lots of heat.

LED lighting instruments can (and I won’t go into all the technical details, but they basically mix red, green, and blue to) generate pretty much any color you desire, all in one instrument. This means that one LED instrument can take the place of several conventional ones. Fewer instruments are in the ceiling, less time and labor are required to install them, which results in cost savings for you. For example, you often pay for rigging in your ballrooms, and fewer instruments means less truss, fewer hard points used in the ceiling, less rigging labor—all of which saves you money.

And these little diodes can be used inside lighting instruments that move. Moving lights, the other huge game-changer in the industry, can point in almost any direction, casting light in one specific spot or moving around the stage or the room as desired. Some have big, wide beams of light, others tight, crisp pins of light.

Put some haze in the room (particulates in the air) and now you can see not just where it is landing, but the entire beam of light. This is how you get those cool lighting looks at concerts and festivals with streaks of color and patterns crisscrossing the air.

So, with LEDs, you have lights that can offer up any color, multiple patterns, and can cast their beams almost anywhere. Pretty nice.

The very latest in LED lighting instruments are being used not just to illuminate parts of the stage, but are meant to be seen by the audience from head-on. They have bulb faces that move, turn, and undulate, creating interesting visuals right on the instrument itself. A few of these in a pattern on the back wall of your stage can provide truly unique looks.

Okay, yes, there are some downsides to LEDs.

Video cameras decipher the lighting color spectrum differently than our eyes do. As such, LEDs can create a blueish-silvery look to people’s faces on the camera shots. To compensate for this, lighting designers will have a few conventional lighting instruments aimed at the locations where you know your presenters or performers will stand. This gives those people more even, true-to-life flesh-tones.

LED fixtures also cost more than traditional ones, but, you need far fewer of them, so you generally save money by using LEDs. They also have to be “programmed,” but lighting consoles these days are easier and easier to use, and any lighting designer worth his or her salt can knock out the programming in quick order.

So, if you want to spice up your sessions while going green, and perhaps saving some money in the process, make sure your AV vendor’s lighting designer is someone who knows his/her way around the world of LED lighting fixtures.

Scott Babcock is the director of event production at PCI Event Productions, an integral part of PCI, a full-service agency that specializes in audience engagement through event production, strategy, video, digital services, and design.