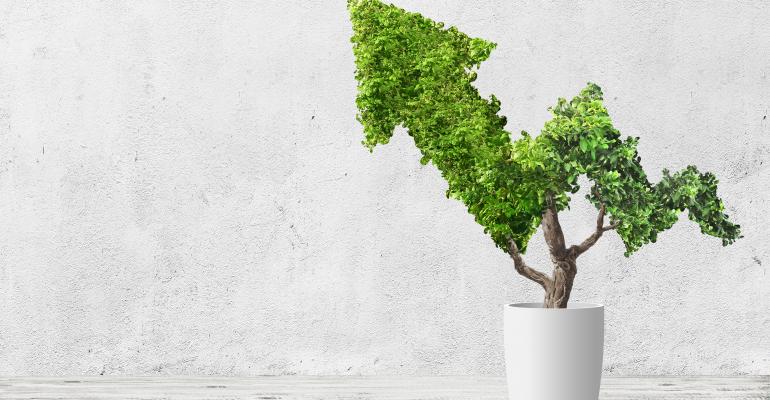 From Sandwiches to Centerpieces: Sustainable Meetings Are Catching On

A Pharma Forum session highlighted what planners are doing to create impactful meetings in an environmentally responsible way.

Oh, the irony! At a session on sustainable meetings at Pharma Forum 2019 at the Marriott Marquis in New York, there were plastic bottles of water on each table. It could have been worse; they were large bottles so that session participants could pour their own drinks into glasses. As session leaders Jennifer Romo Dowd, manager, meetings & conventions at BioMarin Pharmaceutical, and Jody Brandes, group manager at Genentech, made clear, single-use plastic is one of the biggest problems for sustainable events.

While the green meeting message seems to be getting out as hotels and venues choose more environmentally sound policies such as recycling soap and banning plastic straws, sometimes sustainability is tricky to implement. For example, “Compostable dishware may be better for the environment than washing dishes, but it will go into a landfill if your municipality doesn’t compost,” says Romo Dowd. “Start the conversation about sustainability in each location.”

Brandes suggested that having conversations with suppliers and venues needs to continue, but internal buy-in is critical to implementing sustainable policies. One of the ways in which planners can do this is to look at the 17 Sustainable Development Goals from the United Nations and align some of them with their organization's goals and mission statements. Internal stakeholders may not be aware, for example, that their organization is already committed to good health and well-being, goal number three, by providing programs to help employees quit smoking and offering flu shots.  U.N. SDG number two, ending food waste, may align with an organization’s goal to cut down on waste and inefficiency, and is likely to save money once it is implemented. The 17 goals are a good starting off point for planners looking for inspiration for their own goals, in other countries manufacturers have embraced them for their own products. In Japan, some TV commercials mention the goal that the product is aligned with to make it more popular with consumers.

Another place for ideas, according to the session leaders, are the MGM Resorts Sustainable Meeting cards. The packs of cards each have an idea for making meetings more sustainable and are freely available from MGM. Brandes suggests laying the cards out in three different piles: one category for actions that planners are already implementing, another for things that could be done without too much difficulty, and a third for long-term actions that will require additional budget or permission. Build a business case for the new action items you want to implement by showing how effective other sustainable ideas have been and lay it out in strategy and budget meetings.

The session participants contributed some great ideas for sustainable meetings that suggest the movement is catching on.

• Don’t hand out plastic drinking bottles with the company logo. Attendees tend to throw them in the trash.

• Track how many people actually come to breakfast each day of your event and use that history at future events for accurate counts that saves money and cuts waste.

• One participant couldn’t find a shelter to take food leftovers, so she invited families from a nearby Ronald McDonald house over to eat at the hotel instead.

• Know your group and your destination. One planner hosted an event in food-centric New Orleans and ordered only 25 boxed lunches for a group of 50 people. The client was concerned, but the planner was proved right when there will still four lunches untaken.
• Dowd found out that in Sonoma County where she works one in four people are food insecure. She took that information to her boss and explained that federal Good Samaritan laws protect the company from liability issues and the company now donates surplus food. Both presenters warned participants that even though the Good Samaritan law is a federal law some clauses vary by state. However, they were unable to find a single case where an organization was sued for food donation.

• In Las Vegas, MGM Resorts sends some food to pig farms but last year also provided 80,000 pounds of food to the homeless.

Lastly, session-goers were urged to think about every aspect of their events, even centerpieces. Many meetings donate floral arrangements to local hospitals or senior centers but Brandes said that at Genentech they took the idea a step further. Instead of flowers, the company spent the money on books and displayed them in small stacks tied up with ribbons with a note saying they were going to be donated to a school in Los Angeles. The centerpieces were both useful and attractive and served as a reminder to attendees that there are easy ways to do long-term good by thinking creatively.