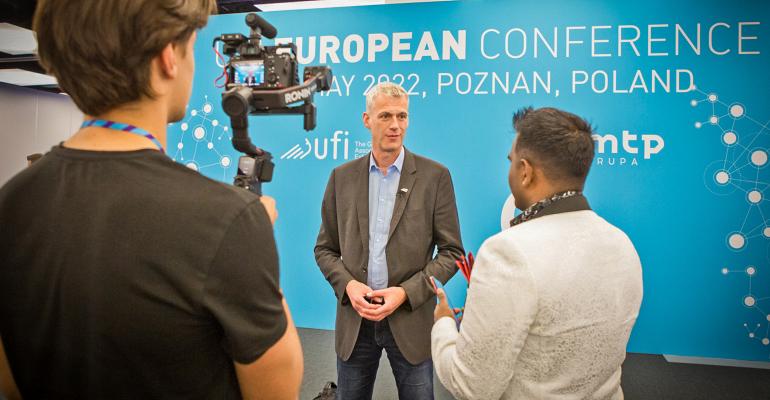 Meeting Sustainability on the World Stage

Changemaker Kai Hattendorf is part of the community of industry leaders that brought the Net Zero Carbon Events to COP26. Find out what they have in store for COP27.

Managing Director and CEO, UFI, the Global Association of the Exhibition Industry

In November 2021, meeting and convention leaders stepped onto the world stage at COP26, the United Nations Climate Change Conference. They delivered a pledge, signed by more than 100 industry organizations, to work towards net zero carbon emissions by 2050, with an interim goal of a 50-percent reduction by 2030.

That moment in Glasgow completed phase one of a new and ambitious Net Zero Carbon Events campaign that, just six months earlier, wasn’t even on the drawing board. The story of how it came together and continues to move sustainability efforts forward revolves around a shared vision and commitment. “If you want to drive change, be willing to start something and don’t be afraid if you don’t know the fifth or sixth step of it. Just get started,” says Kai Hattendorf, managing director and CEO of UFI, the Global Association of the Exhibition Industry, and one of the people behind the campaign.

When Hattendorf tells the Net Zero Carbon Events origin story, early praise goes to the Scottish Events Campus, host of COP26, and its director of conference sales Kathleen Warden, who began raising the question, “Why isn’t our industry uniting behind climate issues?”

Among the leaders Warden talked with about initiating industrywide action and being a part of COP26 were those from UFI; AIPC–International Association of Convention Centres; and the International Congress and Convention Association. The three organizations had been working closely in the past couple of years to create pandemic-related resources, so there was a “very good operational flow for getting things done,” Hattendorf says. But they had to figure out where to begin.

What they learned is that participating in COP requires organizations to work closely with the United Nations Framework Convention on Climate Change. “And it also just so happens that the UNFCCC, which is the part of the U.N. that runs the climate accord and COP, is based in Bonn [Germany], where I live,” Hattendorf says. “So, I became the connector of the dots. I could connect UFI, ICCA, and AIPC and the industry, and I could meet with management at UNFCCC.”

Enter Miguel Naranjo, program officer at UNFCCC. Naranjo had “already supported two other industries with their transformations,” says Hattendorf. The fashion industry launched a climate-action pledge at COP24 in December 2018 called the Fashion Industry Charter for Climate Action. And at the same COP, the sports industry introduced its Sports for Climate Action Framework.

Working with Naranjo helped to lay the groundwork for Net Zero Carbon Events. “Obviously, we need an industrywide answer; obviously, we have a deadline, which is November 2021, COP26; and, wait a minute, we’ve got five months left!”

“We got to work,” Hattendorf says. “We needed a pledge, and it had to fulfill the criteria of the United Nations,” meaning it had to be created through an inclusive, open process. A project team began reaching out to as many people as possible and putting together a draft pledge, which went through several iterations in working groups and webinars. “And we got it ready on time. We went to Glasgow, onto the world stage at COP26, and presented it with the heavyweights of our industry.”

As of May 2022, backing for the Net Zero Events pledge, which can be read in full here, had grown to 352 supporters overall, including 231 signatories. (“Signatories” are involved in executing events; others, such as destinations, sign on as “supporters.”)

Immediately after COP26, the goal line changed to COP27, where the campaign plans to present phase two: a roadmap for holding net-zero events with an emphasis on metrics and measurements for carbon reduction. The latest version of the roadmap, now available for public comment, will be finalized in time for COP 27, taking place November 7 to 18 in Sharm El Sheikh, Egypt.

After that, “it’s about implementation,” Hattendorf says. In the third phase, the campaign will be “rolling out work streams and projects on waste management, on on-site energy consumption, on stand construction, on hospitality, on everything related to events that we can directly influence. The biggest elements that we can directly influence as an industry are energy, waste, and food and beverage.”

For any change initiative, “dare to get started,” Hattendorf reiterates, “If you fall flat, you fall flat, but you’ve tried. If it’s something relevant and you are genuine in your approach to getting something done together, people will see the value and will be happy to chip in and work with you.”

Admit It: The Events Industry Is Missing the Mark on Sustainability
Jul 12, 2022