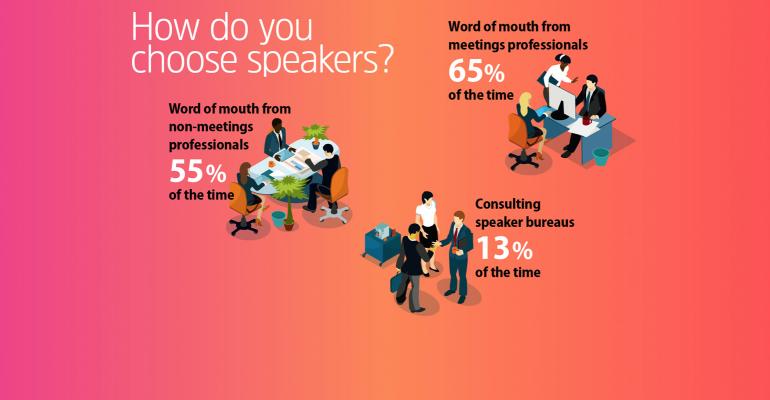 How to Hire (and Pay for) the Right Speaker

A planner's best tactic to get speaker ideas might just be reaching out to colleagues and contacts.

In a survey released this year by Jay Baer, SpeakInc, and Michelle Joyce Speakers, planners were asked how they chose speakers. Planners said word of mouth was key. (See chart, above) Velvet Chainsaw Consulting undertook a similar survey in 2013 with the same results.

Velvet Chainsaw’s vice president of professional connexity, Sarah Michel, CSP, says planners know their attendees and can tell if a speaker will resonate with them, but that is not necessarily the point. “Being more intentional about why you are picking the speaker means thinking about the message you want to deliver. The general session is your community gathering; what is the overarching idea for the conference you want the keynote to introduce?”

The survey also found a third of speakers were selected by planners watching YouTube videos, which Michel says is another problem. She asks, “If we can watch the video for free at home in our jammies and bunny slippers, where is the value in seeing the speaker at a conference?”

Michel says it’s OK to ask around for recommendations on speakers, but include vendors and advertisers as well as other planners, filter out speakers if the only thing you remember is that they were funny, and don’t necessarily filter out those you think are out of your price range. “We are drowning in content but short on solutions, and a speaker who can distill the message and then answer the question, ‘what now?’ will boost your budget by bringing your attendees back next year,” she says.

Michel sees speakers as a good sponsorship opportunity and advises planners to talk to key suppliers and big exhibitors to see if they will be an educational champion for the conference. “No one cares about lanyards, but sponsoring a speaker brings prestige and as much exposure on the main stage as the Wi-Fi sponsor whose name is in the password.”

Michel describes an upcoming conference for an American national association which works as a perfect case study on choosing and funding the right speaker. The association asked one of its vendors to sponsor a speaker they knew the vendor  had already hired. It turned out that the speaker, Gerry O’Brion, had such an impact on the vendor that it had made significant and successful changes.  The vendor agreed to sponsor O’Brion, a win for both the audience and the association’s budget, and the vendor’s president will introduce O’Brion onstage and talk briefly about his company’s new improvements, a win for the vendor.