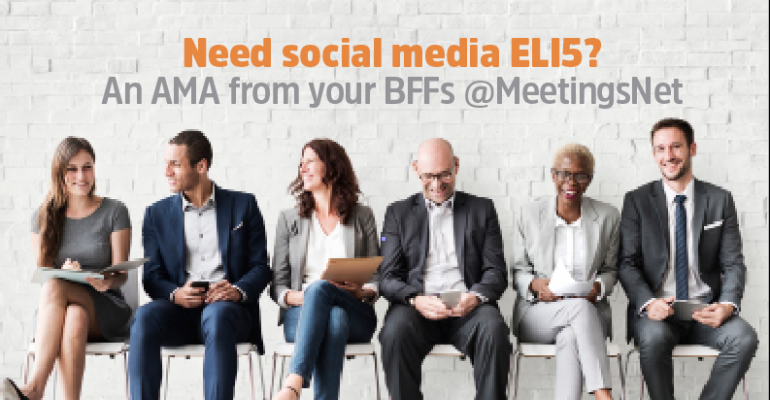 Yes, we’re living in an increasingly mobile, social world, and meetings are no exception. During a session at the 2017 Meeting Professionals International World Education Congress, Alex Plaxen, president of Little Bird Told Media, share the above factoids and answered questions about what meeting pros need to know to make the most of social.

What are some important factors to include in a social media strategy for events?
Make it clear that social media is front and center, he said. “Have a social media command center—don’t hide your social media team in a back room. Give them cool t-shirts and put them in a social media lounge that includes a charging area (and don’t forget to get a sponsor for the lounge). Let people see them—show attendees what you’re doing.” Also, don’t just mention at the opening general session that you have a hashtag. Explain the benefits of using it, and what they’ll miss out on if they don’t engage with your event on social media.

Focus on providing excellent customer service, he added. “If you’re not focused on customer experience, they won’t use it—and you want them to use it.”

Social media walls also are becoming more common, and can be a great way to both show what’s going on and the benefits of interacting. The only caveat he mentioned was to be sure to have someone monitor the stream to ensure that irrelevant or inappropriate posts don’t get splashed on your public wall.

And don’t forget to post a lot of video! More than half of marketing professionals worldwide name video as the best type of content when it comes to return on investment. “When you do a search, the first posts that a come up are videos. You want yours to be at the top,” he said. And you also want it to be the best, so have your social media staff sitting front and center so they can capture what’s happening clearly and quickly.

What can I do to make my livestream content go viral?
First, have really good content to share, he said. Then pick the platform that will make it easy for attendees to share with friends and followers. Livestreaming video platforms Instagram and Twitter are public, while you can set Facebook and Snapchat livestreaming to be either public or private.

Facebook Live—what Plaxen called the like-and-share platform—makes it easy for attendees to download your content, edit it to put their own spin on it, and upload it to YouTube and other platforms. Your attendees can easily personalize and spread your content, and it is experiencing an ongoing growth spurt, with views expected to reach 64 billion per day by August, said Plaxen. “All you have to do is create compelling content and ask people to share it. That’s how it goes viral.”

“Periscope (owned by Twitter) is what I call a ‘speak-easy’ platform. Its videos disappear once they’re no longer live.” This makes Periscope great for posting ephemeral content such as behind-the-scenes interviews and sneak peeks.

Snapchat—Plaxen calls this one “the play platform” in large part because it enables event organizers to create event-
related geofilters they can overlay onto photos from the event. “Filters are a great way to get people to play and have fun,” he said. “Even if you’re not going to post on Snapchat, create a handle and provide a geofilter attendees can use.”

And, he added, be on the lookout for new live platforms from Linked-In and YouTube to come online later this year.

What’s more important when it comes to social media posting: quantity or quality?
You want to be posting frequently, but quality is also important, he said. Pick the best quotes, the most tweetable items, and include images—that makes posts more shareable, he said.

How do you get people to follow your event’s social media accounts?
It may sound old school, but use email to tell them what to do and how you want to engage with them on social media, said Plaxen. Tell them what they could miss out on if they aren’t engaging with you. And give them a “help hashtag” where they can send service requests, for example, to get the room temp turned up or down quickly.

It also helps to engage with your industry’s super users. Look at your data from last year—who used the hashtag the most? Filter out your sponsors and exhibitors to find your attendee super users, then reach out to them. “Make the ask. If you don’t, they probably won’t do anything on your behalf,” he said. “And make it an easy ask” by supplying some pre-written tweets and giving them graphics to use.

Also look to see who’s active on industry hashtags outside of your event, such as #eventprofs for the meetings industry, he added. “Follow them throughout the year, see who else is active on that hashtag, and ask them to promote your event even if they aren’t registered. Also look for your industry’s influential bloggers and ask them to post about your event.”

Is it wrong for suppliers to promote themselves using the event hashtag?
“No, but don’t spam people,” said Plaxen. “Do see if you could be helpful. If someone posts that they need something and you can help, do it.”

Exhibitors and sponsors can make themselves stand out by posting cool graphics and videos, demos from their booth, and holding a social media contest with a great prize.

“Be engaging,” he urged. “Retweet attendee quotes, comment on their posts—stop selling on social media, and start building relationships.”

Why Hashtag Printers Are a Conference No-Brainer
May 17, 2017

Are You Ready for the 5 Technology Pillars of Disruption?
Feb 21, 2017