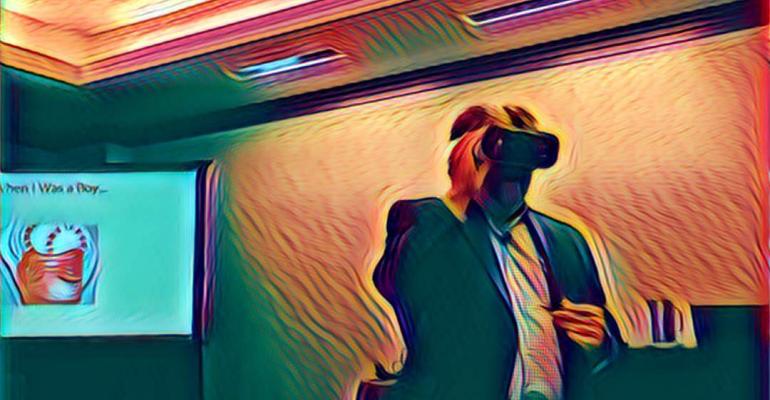 Are You Ready for the 5 Technology Pillars of Disruption?

Few things make you simultaneously wish you were in someone’s shoes and feel so glad that you’re not as watching someone jam out to a Paul McCartney concert via an immersive virtual reality headset in front of a room full of people. Yes, the guy who donned the headset and boogied down at the start of a session on cool technology trends at the Financial and Insurance Conference Planners Annual Meeting was undoubtedly having a blast. But for the rest of us who weren’t having the same experience, it definitely felt a little uncomfortable.

Get used to it, said session leader Jim Spellos, president of Meeting U tech guru. VR may very well be the next big content delivery tool for meetings.

When thinking about tech and meetings, it’s easy to just keep doing what you’ve been doing—why change? You have to consider whether any specific technology could further your meeting’s goals, whether your attendees would like it, and if it’s worth the risk and money, said Spellos. But it’s equally important to weigh the risk of stagnation, he added. “Ask yourself, can we afford not to stay current? This isn’t a technology conversation—it’s a creativity conversation.”

Here is a quick skip through the “five pillars of technology disruption” that Spellos said will be affecting meetings in the very near future—if they’re not already.

Pillar 1: Mobile
“We shouldn’t even be having conversations about mobile anymore,” said Spellos. “Everything to do with your meeting has to be mobile-friendly.” A year ago, 60 percent of all web traffic came from mobile; Spellos estimated that the number is now up to around 80 percent.

Pillar 2: Social
When he polled the room on which of the five pillars of disruption people thought would most affect their meetings over the next two years, social won the popular vote. As with mobile, Spellos thinks social technology has already hit the mainstream for meetings. “You have to be on all social media now,” he said.

The problem with social tech is that it is such a fire hose that people are drowning in too much information—no one has time to go through it all to find out what’s meaningful to them. Your role, he said, is to be the curator who cuts through the chatter to funnel just the information your participants need and want. Some tools you can use:

• Paper.li allows you to create a digital newspaper filled with curated content.

• Flipboard is a similar product, only it uses a digital magazine format.

• Nuzzel creates a news feed based on what your connections are reading and sharing on social media.

• Mention is an app you can use to monitor what people are saying about a topic—such as your organization or your event—allowing you to track your reputation across social networks and news sites.

Pillar 3: Artificial Intelligence
Spellos said his vote is on AI to be the next big game-changer for meetings. Machines now are learning from each interaction they have, getting smarter the more they are used. Think Amazon.com’s recommendations, and digital assistants such as Apple’s Siri and Amazon’s Alexa (the voice service of the Echo)—AI is making inroads in many aspects of life and work, so why not meetings?

For example, Chat bots—automated robots that are housed within a website to interact with people coming to the site—are perfect for registration, he said. “They can patiently answer all those repetitive questions.” Another example is Hilton’s robot concierge, Connie. Powered by IBM’s supercomputer-AI wunderkind Watson—which after soundly defeating human contestants on “Jeopardy” went on to apply “question answering” superpowers to everything from healthcare to weather forecasting—Connie learns and improves its suggestions every time it interacts with guests asking about local tourist attractions, dining options, and hotel features and amenities.

And for busy planners—and himself—Spellos swears by the Amy (X.ai) personal assistant, an AI online service that will do all that back-and-forth involved in scheduling meetings for you, and do it so well no one will even know they’ve been corresponding with a bot.

Pillar 4: Augmented and Virtual Reality
Virtual reality—a three-dimensional immersive experience—and augmented reality, which overlays new information on real objects, are already here, he said. Auto manufacturers putting heads-up displays on their car’s windshields is one example of AI in the real world now. “Hotels have been faster to adopt AI and VR than planners,” he said, as many are now using VR to provide realistic virtual site visits. But now that VR is getting more affordable—Google Cardboard costs “next to nothing,” he said—planners may start thinking of ways to incorporate more virtual into their meetings’ realities.

AR also is earning a spot in the meeting tech toolbox. Spellos mentioned an app called Layer that you can use to, say, add a video to the cover of your meeting brochure accessible by anyone who hovers their phone over the brochure.

And, while the ability to paint in 3D using a VR headset doesn’t have obvious meeting applications, Google’s VR Tilt Brush could be a brilliant way to inspire creativity during a brainstorming session, or at least provide an entertaining break as attendees don the VR headset and paint their 3D visions while others watch on a TV display.

Pillar 5: Wearables
If you’re not wearing a Fitbit or other personal fitness tracker, chances are you know someone who is. Wearable tech is another trend that’s bound to make its way into meetings sooner than later, said Spellos. One example he demonstrated was Myo, an armband that you can use to control a phone, computer, or other device remotely. While it took a while to warm up, Spellos demonstrated how he could use Myo to advance slides just by clicking his fingers.

Another interesting wearable specifically designed for use in meetings is Bird, which turns any surface into a screen that presenters can use to display and interact with content from their PC, tablet, or smartphone using touch, remote touch, gesture control, voice command, a mouse, or just by hovering over the surface—from up to 100 feet away.