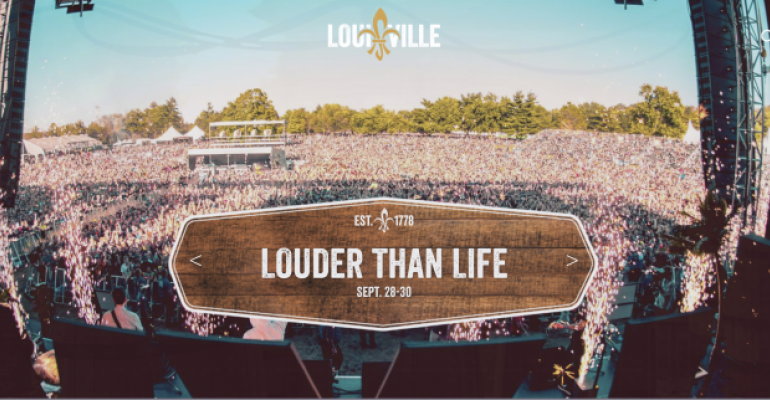 Days-Long Storms Cause Huge Special Events to Cancel in Louisville

Two festivals, Bourbon & Beyond and Louder Than Life, get flooded out of downtown Champions Park; city and CVB officials enact contingency plans quickly for attendees.

Two multi-day events with attendance of more than 50,000 people were forced to cancel in Louisville, Ky., over the past week, with the city's government and Louisville Tourism using their social media channels very soon thereafter to suggest alternative activity options.

California-based promoter Danny Wimmer Presents operates both outdoor festivals. Danny Hayes, the firm's CEO, was forced to cancel the last day of Bourbon & Beyond on Sunday, September 23 due to nearly two inches of rain that fell on Saturday. “The city’s special events coordinator was on the scene throughout [Saturday] night and into Sunday morning with the promoter, when it became clear that flooding was getting worse and creating unsafe conditions," Jean Porter, the city's deputy director of communications, told the Louisville Courier Journal on Monday. Hayes added there was "significant" financial loss from refunding tickets and losing revenue from canceling the Sunday itinerary, when acts like Sting and Counting Crows were to play.

What's more, continued heavy rain right into Monday made host site Champions Park—where corporate and association meeting groups occasionally hold receptions and special events too—unable to be drained in time for the ankle-deep mud to dry and thus allow installation of equipment for the Louder Than Life festival set for September 28-30. The determination that the park was unsafe for the upcoming event's set-up was made by Marty Storch, the City of Louisville's director of special events.

Hayes said at a press conference on Tuesday that other venue options, such as the city's 22,000-seat KFC Yum Center plus several smaller spaces around town, were considered for some of the musical acts but ultimately proved unworkable. "We explored every single option you can imagine," Hayes said. "Logistics become a huge nightmare." He did, though, take the double dose of event trouble in stride. "It happens, but it doesn't deter us from this city, doesn't change our passion, doesn't change our plans. We're here until they kick us out."

The company began issuing ticket refunds this week, and Hayes noted at the press conference that his firm had insurance for the Louder Than Life event, though he did not say whether it was only for costs incurred or for some percentage of lost revenue as well. As for those attendees who were already in town for that festival, the promoter, the city, and Tourism Louisville used their websites and social media channels to alert people of the cancellation as well as to let them know about other activity options in the city over the event's dates. Karen Williams, president and CEO of Tourism Louisville, said at the press conference her staff worked with the city's hospitality industry to compile a list of promotional discounts available to ticketholders. The CVB also noted that Louder Than Life was estimated to have a financial impact of about $4.9 million on Louisville.