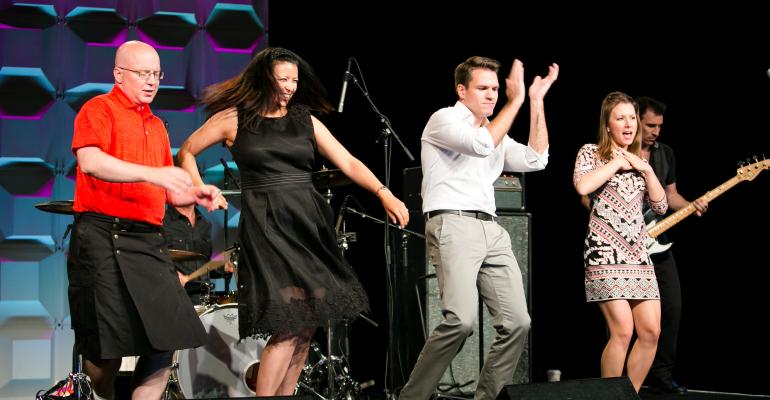 Here are some of the moments and quotes that resonated with me at this year's Meeting Professionals International World Education Congress, from crickets to pitch slaps and beyond.

There were a few glitches to be sure, but there also was a lot to love at this year's Meeting Professionals International's World Education Congress, held June 19–22 at the MGM Grand in Las Vegas (with events at assorted other venues as well)! Here are a few of the standouts for me, though this list keeps on growing as I think back on all the sessions, and events, and people, and activities that I enjoyed last week. I'll start with some favorite quotes:

“Las Vegas is the most spiritual city—in the sense that it does not pretend to be anything that it is not.”—Deepak Chopra at the groundbreaking of the MGM Grand expansion

“Where is your customer’s voice in the planning process? Is it even there? If anything you do is not in the best interest of your participants, don’t do it. Don’t put the sponsors’ needs before those of your target market.”—Jeff Hurt, Velvet Chainsaw Consulting, during the introduction to his 4Ds session series. In terms of learning experiences, even though I only made it to three of the five sessions, they went deep and the roots planted are just now really starting to grow. Velvet Chainsaw Consulting's Jeff Hurt teaching one of the

“Crickets are the new kale.”—Christine Couvelier, president, Culinary Concierge, during her “Move Over Kale! Successful Tastes and Trends" session.

“Don’t strap a rocket to a donkey—boost your unicorns.”—Alex Plaxen, president, Little Bird Told Media, on which social media posts are worth spending the money to boost, with unicorns being posts that are already doing well organically. Update: Alex has informed me that he was actually quoting Larry Kim, founder of WordStream, when he said this. Wherever it originated, it's a concept that is now stuck in my head forever, so thanks, Alex!

“People are exhausted—they’ve been pitch-slapped.”—Ron Tite, CEO of The Tite Group, on why people are so skeptical about face-to-face events because they are so used to having every interaction being about someone selling them something. See Jeff Hurt quote above.

“Methods without mindset are useless.”—Sarah Prevette, innovation speaker and founder of the Future Design School, on her process for moving beyond planning meetings to designing experiences, and specifically how easy it can be to let our egos get in the way of really hearing what our "customers" are telling us they want and need.

“No thinking, no learning, no change. We’re creating neural addicts by providing quick dopamine hits instead of deep engagement.”— Jeff Hurt, Velvet Chainsaw Consulting, during the introduction to 4Ds session.

“The process of planning for risk management isn’t all that different from event planning—you plan for what you can and deal with the rest when you get there.”—Michael Owen, managing partner, EventGenuity, during a session called, “Bullets, Bad Guys, and Fire and Brimstone”

“It is predicted that in the next three-to-five years, 100 percent of developed countries will have some type of healthcare compliance reporting program.”— Pat Schaumann, senior director of healthcare compliance, Maritz Travel Company, talking about the future of medical meetings. I also found interesting her statistic that “it is anticipated that there will be one million plus medical meetings in the U.S. In 2017,” though I still am not sure where she got that number from.

“There is no such thing as learning preferences. Research shows that we are all visual learners, even those who are vision-impaired.”—Jeff Hurt, again. I know, but he had so many awesome nuggets!

“In an emergency situation, the most important thing is to park the emotion and get the work done. Not to get all 'Star Trek' on you, but get your Spock on. You can break down later when it has had time to sink in.”—Anne Finzer, president, CEO Corporate Event Organization, on her experience relocating an entire event in a day when her original venue was shut down due to a wildfire in Alberta, Canada.

“Volunteerism has been pivotal to my career growth…don’t give your time. Invest your time.”—Amanda Armstrong, MPI chair elect.

“Research finds that, generally speaking, if an attendee can meet 10 people in the first two hours of a conference, they’re 92 percent more likely to return the next year.”—Sharon Fisher, chief IdeaSparker, Play with a Purpose, during a session on how to engage introverts in the extrovert-centric world of meetings.

“I love rock and roll. Put another dime in the jukebox baby!”—rocker Joan Jett at the closing night party. She was so awesome.

Standout Moments
• When Marilee Sonneman, CMP, DMCP, founder of Spotlight Sojourns and president of the MPI Northern California Chapter, after winning the head-banging competition on stage (so hilarious--thanks to all who participated and to SongDivision for doing it), shared that the only thing that would be better would be backstage passes at a Guns N' Roses concert. The look on her face when emcee Dena Blizzard brought her back up on stage at the final day luncheon to tell her that an unknown someone or someones were sending her and a bunch of friends of her choice to the Guns N' Roses concert in St. Louis later this month? Priceless. Marilee Sonneman, CMP, DMCP, founder of Spotlight Sojourns and president of the MPI Northern California Chapter, learning that she was going to a Guns and Roses concert

• Watching emcee Dena Blizzard’s video about her new game for moms based on the idea behind the popular PokemonGo game—ChardonnayGo.

• Sharon Fisher shared this great idea someone had told her about earlier: Ask people at the beginning of a general session to write down three things they want to learn during the session on notecards, and to cross off their questions as they get answered. Toward the end of the session, collect the cards and use the unanswered questions as the basis for the Q&A. Brilliant!

• The banquet table setups at the luncheons were so cool. This photo doesn't entirely capture it, but it was so much better than the usual rounds. The unique and interesting luncheon ballroom setup at MPI WEC 2017

• People who were willing to get up and dance on the stage with the fabulous SongDivision band during the general sessions. (And the moment it finally dawned on me that the guy in the kilt on the left is someone I've known for years, though mostly on the Meetings Community, a.k.a. MeCo listserv, not in real life—MeCo cofounder Jim Louis, MS, CMP, CAE, president of Best Meetings Inc.) Getting down during a dance-off competition at MPI WEC 2017

• Learning how to make a “Rat Pack Manhattan” at the beginning of an end-of-the-day session on food and beverage trends—and then getting to sip it. I’m generally not a huge bourbon fan, but those were good! • This “wall of greens” in the Farm at MGM area. Chefs snipped ingredients directly from these living walls to create salads on the spot. It was very cool. I need one of these for my house! • When one of the people in my small group during the “Deep reflection” session nailed exactly why I have such a hard time following up on sessions like this one that entail a lot of thought and, well, deep reflection.

• Comparing travel tips with fellow veteran road warriors while petting those amazing white furry chairs in the Meet Well station near the escalators up to the sessions. Anyone else swear by packing squares? I have been a roll-stuff-up diehard, but they sold me on the cube thing.

• All of the entertainment was really remarkable, but the wonderfully named Well-Strung, who segued from Mozart to Kelly Clarkson, were mind-blowingly good:

• Walking down the Strip after midnight on my way home from the Big Deal (I couldn’t find the buses, which were parked somewhere out in the back of Caesars, and the cab line was crazy long, so I decided to hoof the half mile or so back to the MGM Grand). There is nothing in the world quite like people watching after midnight on a super hot Vegas night…

• Everything about Michael Cerbelli’s The Hot List! I had already fallen in love with Well-Strung, but the aerial drone show, the pancake art by Dancakes (including one of Cerbelli’s face, leading to the improbable comment, “I bet you’ve never eaten your own face before”), to the Skating Aratas, who thrilled and terrified me in equal parts with their incredible roller-skating acrobatics…so many amazing acts and ideas in such a short time, and Cerbelli himself was the perfect ringmaster.

• Totally randomly ended up sitting at the Indy table during the final luncheon that they sponsored as the host for next year’s WEC. I got to wave the checkered flags, dance like a dervish to The Voice winner, and Indy resident, Josh Kaufman as he took it home with a version of Bruno Mars’ Uptown Funk that entailed confetti cannons wielded by members of the Blue Man Group, and a stage full of crazy-happy Indianapolis natives.

What were some of your favorites moments/quotes/activities/takeaways?