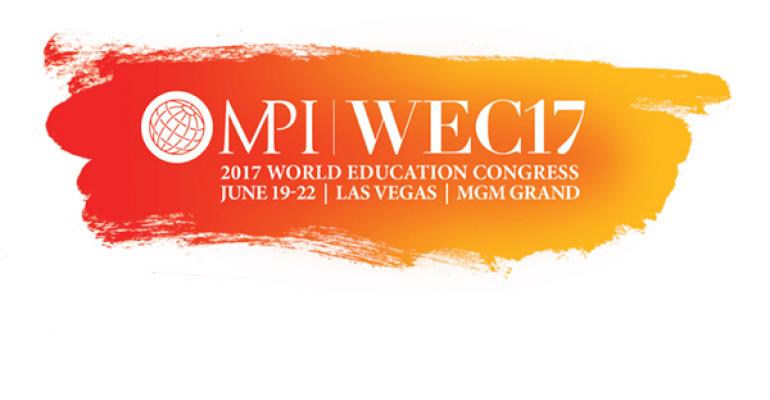 The 2017 Meeting Professionals International World Education Congress, held June 19–22 at the MGM Grand in Las Vegas, drew north of 2,400 participants, topping the registration totals from the last time the event was held in Las Vegas. Here are a few more stats about the event:

• Twenty to 30 percent of this year’s attendees are new to WEC, according to MPI Chair Brian Stevens, CEO of ConferenceDirect.

• Sixty percent of this year’s attendees are meeting professionals.

• Thirty-five percent of those at this year’s WEC were not MPI members—not yet anyway, though as of the first day of the conference, 245 had already signed up, said MPI President and CEO Paul Van Deventer at a press conference. He sees this as a sign of success in MPI’s attempts to expand its base to those who fall outside of the traditional meeting planning realm, including those who are in marketing and finance.

• Close to 250 people took part in the event’s hosted-buyer program. This year, MPI repositioned and repurposed its hosted buyer area, which was dubbed The Exchange to replace its former moniker of The Marketplace. The organization also moved some of its highly popular activities into The Exchange this year, including its puppy-cuddling program and breaks.

• More than 70 educational sessions took place at this year’s event, most of which were eligible for clock hours toward the certification or recertification of the Certified Meeting Professional Designation.

• The MPI Foundation provided 320 scholarships and grants during 2016, and expects to beat that number this year with funding provided by several fundraisers held during this year’s WEC, including The Big Deal, Rendezvous, and the President’s Dinner, which this year honored Ray Bloom, chairman and founder of the IMEX Group, for his contributions to the industry. The events raised $340,000 to support scholarships for students and young professionals.