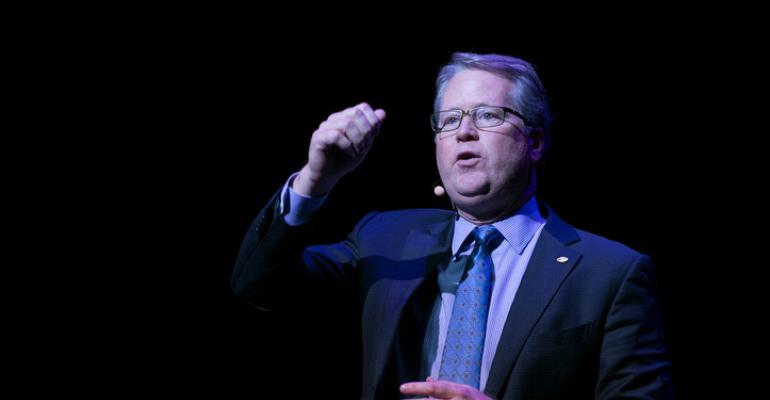 MPI WEC 2017 Takes on the Many Faces of Risk Management

From an AWOL keynote speaker to a renewed focus on safety and security, Meeting Professionals International’s annual conference walks the talk on dealing with difficult situations.

Looking remarkably chipper in a video released around 2 a.m. Wednesday, Meeting Professionals International President and CEO Paul Van Deventer delivered some unwelcome news to the more than 2,400 participants at MPI’s World Education Congress: Wednesday’s luncheon keynote speaker and basketball icon Magic Johnson wouldn’t be able to make the meeting, or even livestream into the MGM Grand in Las Vegas, where the meeting is taking place May 19–22, due to professional commitments to his day job with the Los Angeles Lakers.

MPI staff and their partners on the MGM Resorts International team rallied the troops to find a replacement that would meet with the conference theme, “Stop planning meetings. Start designing experiences.” After looking at a number of options, they decided that the Jabbawockeez dance troupe would bring the right mix of entertainment, energy, and interaction—and the right bang for the buck. They also added a panel discussion with the tired-but-still-game MGM and MPI staffers, who had spent most of the night scrambling, to debrief those who wanted to hear more details on the last-minute change.

A series of poll questions revealed that most of those listening to the panel approved of the way the situation was handled. Most had not experienced a similar incident, but all seemed to dread it. Eighty-eight percent agreed that the early-morning video announcing that Johnson had cancelled was the best way to let people know, rather than waiting until the morning, or even until the luncheon itself. Panelists said that they ultimately decided that the video would be the most effective way to move the conversation away from rumors and controversy and toward anticipating what MPI would do instead.

Striking the right tone is a skill Van Deventer also found himself using earlier on the first day of the conference. One of this year’s WEC design experiments was to hold a two-hour-plus opening general session starting at 6:30 Monday night, to be followed by a reception at The Park at New York–New York Hotel & Casino with food, entertainment, and the music of the B-52s. Despite a bang up opening by Blue Man Group, a dynamic emcee, and four on-theme and engaging speakers, many in the audience decamped long before the opening session officially concluded at the Monte Carlo Las Vegas to grab some chow and a cocktail at the reception across the street.

It is MPI’s role to try new things and, if necessary, make a few interesting mistakes so its members don’t have to, Van Deventer had said during the opening session. However, he added the next day during a press conference, “It was not our best idea to hold it over cocktail hour in Las Vegas.” Van Deventer then cited a quote by author Neil Gaiman that he had first presented at the opening general session: “Go and make interesting mistakes, make amazing mistakes, make glorious and fantastic mistakes. Break rules. Leave the world more interesting for your being here.”

Tackling More Serious Threats
While these kinds of issues can ruffle a few feathers, speaker cancellations and hungry attendees are far from the worst risks planners face, especially now that civil unrest, terrorism, active shooters, weather events, and other natural and man-made disasters all too often hit popular convention destinations. That’s why MPI is now working with the University of Southern Mississippi's National Center for Spectator Sports Safety and Security (NCS4) to develop a new six-hour intensive emergency preparedness certificate course, one of the key partnerships Van Deventer outlined as a priority for 2017 at the press conference. The course—Emergency Preparedness for Meetings and Events—debuted at WEC.

The WEC also had a number of breakout sessions on safety, security, and risk management topics, including issues related to travel, cybersecurity, and one scarily titled, “Bullets, Bad Guys, and Fire and Brimstone.”

Forward Focus
Van Deventer outlined five main priorities for the remainder of the year:
• Supporting volunteer leadership. “We have 1,000 volunteers. They are MPI. They are what makes us unique and successful,” he said.
• The MPI chapter network. "This is where most members interact,” Van Deventer said. “We have to make sure they have the tools and resources they need to be successful.”
• MPI Academy. “We’re about professional development in this industry,” he said, citing the launch of the new emergency preparedness course; the Executive Education Series to provide more senior-level programming; its Women in Leadership Program; and a designation program for the MPI Experiential Event Series, which takes planners behind the scenes at events such as the Venice Film Festival, SXSW, and the Indianapolis 500.
• Partnerships. In addition to focusing on partnerships such as that with NCS4, MPI announced it is co-locating its European event with the Society for Incentive Travel Excellence. The SITE + MPI Global Forum will be held in Rome, Italy, in January 2018. MPI also will continue to work with IMEX on its educational programming and with IACC, which showcased its Meeting Room of the Future at WEC.
• The online experience. A complete redo of MPI’s digital platform is slated to launch in September. “Every chapter over the next 18 months will be folded in so all will have a consistent look and feel,” he said.