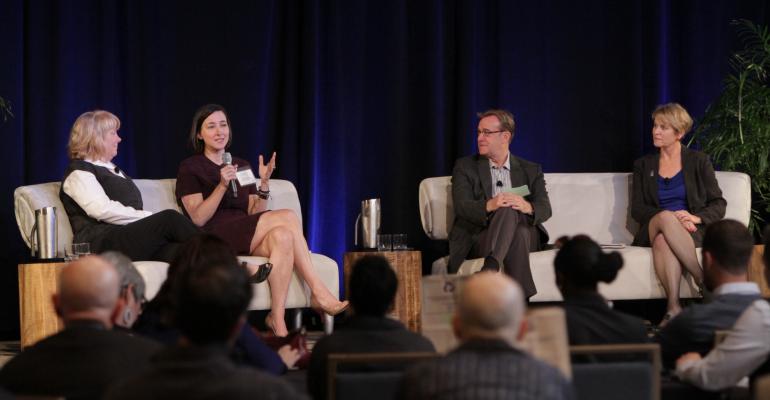 The recent Sustainable Meetings Conference held at the San Francisco Hilton April 15–17 took its theme—Building Bridges—quite literally, as in-person participants built physical bridges throughout the meeting space. The meeting design was based on the idea of leading from one session idea or presentation to the next as the conferees sought to create smaller, but actionable ideas that could ultimately make meetings more sustainable.

Some of those ideas were captured in a final group collaboration led by two of the Green Meeting Industry Council’s past presidents, Paul Salinger, event designer, vice president, marketing, Oracle; and Guy Bigwood, group sustainability director,  MCI Group. They include:

Encourage the philosophy of “co-shows,” an online trading post for the reuse or repurposing of meeting ideas and items that you would typically leave behind. “It’s a philosophy that says you are no longer acting in a silo, but is a way to work with with clients and venues to reuse and repurpose space and resources across the industry,” said one participant.

• Create Hub Teams to Share Info
Hub teams, in cities like Los Angeles, New Orleans, New York, and Chicago, explore how all meetings’ footprint in their cities or regions are impacting the environment. Then the hubs get together, region by region, to identify common themes and practices. They meet as a committee to explore where they are within the greening spectrum and then collaborate and communicate to raise their own standards. It’s a practice already being done in Scandinavia, said Bigwood.

Get rid of traditional trade shows with booths, carpeting, printed materials, and giveaways, suggested one attendee. “It’s the most unsustainable thing you can do. Don’t eliminate the networking. Create a party and an environment that brings people together but is another way to do business.”

• Instead, Try a Cube
Have “cubes” instead of booths shipped around the country, in which each facility has a closet of virtual environments, blank screens, where images can be uploaded and projected with new environments with data from an exhibiting company’s thumbdrive. It would eliminate the building of booths.

• Spread the Sustainability
Turn GMIC into a lobbying or advocacy association or council that engages with policymakers, legislators, and governments or municipalities to ensure that there are mandates for public and private facilities to meet certain green standards. Another group had a similar idea to create more communication and collaboration between the convention and visitors bureau, local government, and the meeting industry.

The conference was also live-streamed and moderated by Kristi Casey Sanders of PlanYourMeetings.com (@PYMLive), whose YouTube channel captured the essence of the meeting for those who didn’t make the trek to San Francisco. How much greener can you get?

Virtual participants, who clearly couldn’t take part in so many small group collaborations, were encouraged to be part of the larger discussion by posting comments on a collaborative document where Sanders was posting notes; by engaging her before, during, or after her broadcasts; or by following and using the #GMIC2014 hashtag.